A lot of people like tinted windows in their cars, especially in the summer and on long trips.

But there are rules and regulations in place to make sure that tinting doesn’t make it hard for drivers to stay safe on the roads.

So, what are the rules in South Dakota, and can you get pulled over for tint?

Read on to learn more about South Dakota’s laws about window tint and how to avoid getting in trouble.

Visible light transmission, or VLT, is the most important measure for window tinting laws.

This number tells you how much light your window lets in.

The lower the percentage, the darker your windows will be, so you must buy film with a VLT that is higher than the minimums listed below.

South Dakota’s window tinting laws were put in place in 1989 to keep everyone on the road safe.

Even though window tint can help block the sun’s glare, if your windows are too dark, you won’t be able to see as well. 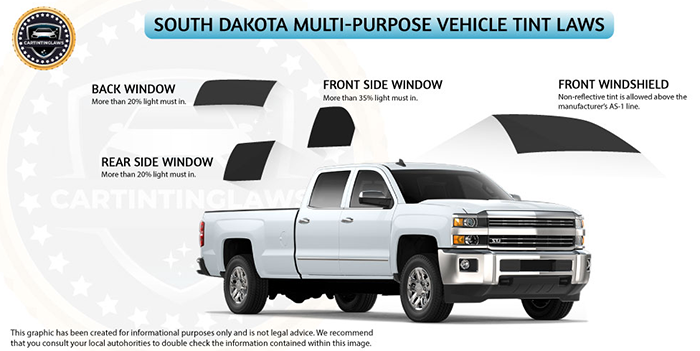 In this state, there are no different rules for sedans, SUVs, and vans.

All cars have to follow the same rules, so you don’t have to worry about what category yours is in.

But there are different rules for the different kinds of windows in your car.

Above the AS-1 line, your windshield can have a tint that doesn’t reflect light.

Your back window, back side windows, and back quarter windows can all be tinted with at least 20% VLT, and the front passenger windows must have at least 35% VLT.

Also, keep in mind that in this state, you can have a tint difference of up to 9 percent.

In addition to the Visible Light Transmission law, there are a few others to keep in mind.

One important thing to think about is whether or not your windows reflect light. This could cause other drivers to be distracted.

In South Dakota, your tinted windows can’t look like they are made of metal or mirrors.

But there are no rules about colour, so you can choose any tint you want.

When you buy film, it’s important to know that the company that makes it must certify it, so check with your dealer before you buy.

Ask them if they sell certified film that meets North Dakota’s rules.

You will also need a sticker to show the tint between the film and each window’s glass.

If you have a serious medical condition in some states, you can get windows with a darker tint.

Unfortunately, South Dakota does not have this kind of exemption, so you will have to follow the local laws no matter what.

Compared to other states, the rules are pretty lax, so darker tint is allowed.

Most of the time, the allowed amount should be enough to keep your skin safe, but you can also protect yourself with things like sunscreen and long-sleeved clothing.

If you are worried about how much sun you are getting, talk to your doctor.

Now that you know what the local laws are, you might be wondering if it’s worth it to tint your windows and what could happen if you don’t follow the rules.

Let’s look at some of the most common questions so you can decide what kind of tinting film to put on your windows.

Why Should You Get Window Tint?

With all of these rules and laws in mind, is window tint still a good idea? Why should you choose this feature in the first place?

Having tinted windows in your car is good for your comfort and your health, among other things.

First of all, South Dakota has four distinct seasons, and summers can get very hot.

By making your windows darker, you can keep your car cool and save money on the air conditioner.

Also, you can be a better driver if you don’t have to fight the glare of the sun, and you won’t miss an obstacle because you have to squint.

Last, avoiding too much UV radiation is good for your health in important ways.

People who spend a lot of time driving should think about getting tinted windows to protect their whole bodies.

Can You Get Pulled Over for Tint in South Dakota?

A police officer can pull you over if they think your windows are darker than what is allowed.

In the past few years, new technologies have come out that make it possible to measure window tint accurately.

If you install windows with too low of a VLT, you will be charged with a class 2 misdemeanour, which will cost you $120.

Putting in tinted windows can help keep the sun, heat, and glare away.

Even though South Dakota’s laws about window tint are very clear, they are also less strict than those in some other states.

As long as you follow the rules, tinting your windows can make your car cooler and safer to drive in.

What Is Neutral In A Car
How Long Can You Drive in BMW Limp Mode?
Can You Drive Without Shoes
Dot 4 Brake Fluid Color