When your car is parked and your speakers are still generating noise, it’s a little unnerving. Even though they are uncommon, static hissing or ticks and pops can be heard. Since the noise was bothering me, I set out to discover the source and eliminate it. A variety of noises can be heard emanating from your speaker, such as white noise, static noise, popping, and more.

Listed below are some possibilities as to why your speakers are making a noise. Even if your stereo is turned off, it may still be receiving power.

The speaker wiring is of poor quality.

The sound of engine noise

Noise is being picked up by patch wires.

Static noise emitted from a distance

Any component that generates an electrical field, such as a wiper motor or speaker wires, makes it difficult to pinpoint the exact source of the problem. Finding out where the noise is coming from is difficult, but it’s the only way to get a handle on the situation. There’s a good chance you won’t succeed at this unless you’re a trained professional who knows how to work with electrical components.

Troubleshoot Your Speaker: What’s The Noise?

1. Stereo Receiving Power Even When Switched Off

The radio and speakers in some cars are wired so that they can be powered up at any time. This could cause noises to come from your speaker even when your car is off and the keys have been removed. Checking your car’s oil is a good place to start. This can be confirmed by shutting down the engine and bringing the keys with you. You can now turn on the radio or stereo and see if it works; if it does, the battery is still providing power to your system.

But don’t freak out if your speaker makes some weird noises from time to time. Switching off the music system before you turn off the car will solve this problem. This will usually put an end to your problem.

Electrical interference is another major cause of static noise from car speakers. For the uninitiated, everything that sends out a signal has the potential to produce strange noises to emanate from your speakers. And there are a lot of them in your car, making it difficult to figure out what’s interfering with your radio. Interference can be caused by something as simple as something plugged into your USB port or even electrical gadgets around your stereo.

In stereo systems with aftermarket amplifiers, this problem is prevalent. Furthermore, rookie installers sometimes make the error of connecting the RCA cables from the amp to the head unit directly to the power wire.

Experts believe that the automobile speaker buzzing is caused by a badly grounded radio system. Grounding is essential for all of your stereo components, including the amplifier, equalizer, head unit, and other peripherals. Static noise can be emitted from a unit that isn’t properly grounded. While this is true when the stereo is turned off, it is rarely the case when it is running.

Grounded components are those that are connected to the chassis by a metal bolt that is attached to a wire that has been pulled from the component. Consider the thickness, length, and bareness of the ground wire, as well as the surface to which it is attached.

Consider using a thicker wire, at least as thick as the power cable, if static noise is too loud.

Also, the noise in your music system could be coming from the speaker wire. Your radio or music system is connected to the speaker via a series of cables, just like any other electrical component. It is possible to hear noises long after the motor has been shut off if the cables are broken or of poor quality. After shutting off the automobile and disconnecting its speakers from its amp, check this out. Otherwise, check the speaker connections to see if the noise persists. As a result of this, you have the following three options: Wrap the wires in mu-metal foil, move them, or rearrange them. 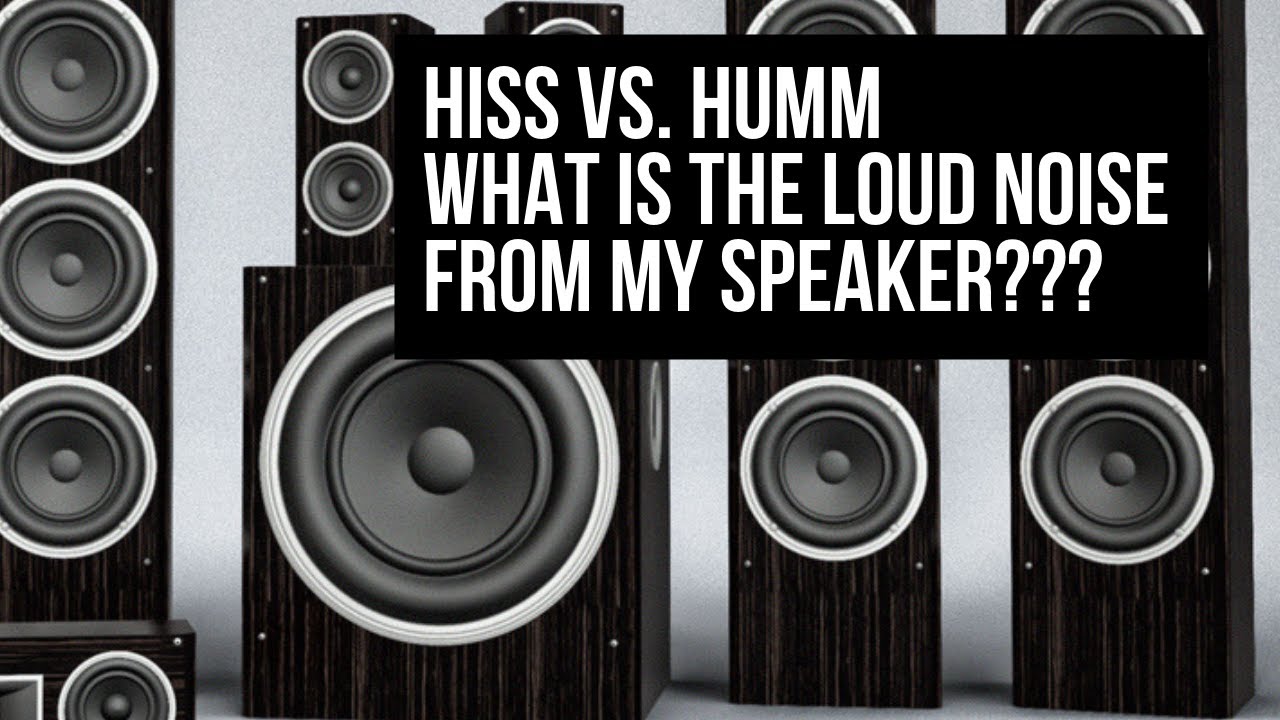 5. Noise From The Engine

Otherwise, the electrical system is to fault for any whining you hear when the automobile is not running. Begin by recharging your battery’s acid level, then wait for the sound to go out. If not, you should have your mechanic have a look at your alternator.

You can hear a ticking sound coming from the ignition in older cars that are in need of a tuneup. However, as the vehicle accelerates, this sound gets louder and quieter. If the loudness of the ignition is bothering you, you can try installing resistor-type spark plugs, carbon-core spark plug wires, a new coil, and distributor caps. If the problem persists, you may want to check your ignition system’s grounding. You’ll get ticks all over your engine if you don’t ground it properly.

The noise will go away if you ground the offending object, but you’ll have to experiment a bit until you no longer hear it coming from your car speakers. Use a braided ground strap to permanently ground the offender once you’ve located him. With the Big 3 Upgrade, you can connect the alternator to the chassis and battery ground wires by using larger gauge wire. This improves the current flow or voltage consistency and decreases the static noise or alternator squeaks.

If your car speakers suddenly pop when the ignition is switched off, it may be because you recently fitted a breathtakingly new amplifier. Several factors could be at play, including a defective amp, a bad mount, or even a lousy ground.

A rubber foot or grommet will let you isolate the amplifier from your vehicle’s chassis. Also, make certain it’s well-grounded. To fix it, you may need to buy a new amplifier.

Noises picked up via the RCA wires that connect the audio components can be heard through the speakers. Patch cables that are old or of poor quality are to blame. Comparatively speaking, low-cost models lack enough insulation and conductivity. Replace the amplifier’s input jacks with new, higher-quality ones after disconnecting the old ones. Connect the old patch cables to the amplifier and remove them from the receiver if you don’t hear the noise. Assuming that the noise continues, the patch wires must be replaced.

Since antennas can also be used as a ground, they can also create static noise in the speaker. When the receiver is not correctly grounded, it can still work. If the sound returns after unplugging the antenna, you may want to consider installing a noise suppressor for the antenna as well as grounding both firmly to confirm this. Remove the receiver from the dash and listen to see if the noise is still there if the previous steps don’t work. A gadget that emits electrical noise may be to blame if the noise ceases when the receiver is in close proximity to it. To reduce the amount of noise, you can install a noise filter.

The receiver’s wiring can also be moved to reduce noise transmission. In addition, mu-metal foil can be used to shield the receiver’s back, the wires, or the component that is emitting the sound.

As previously stated, the car speaker might emit noise even when it is turned off for a variety of reasons. In order to remedy the static noise, the first step is to find and identify the source or sources. Stereos and amplified sound systems can be used, as well as other devices like an iPod docking station and an MP3 player with a USB port. Resetting the ground and reinforcing it with a stout wire usually works. Start by turning on your head unit to find out where the noise is coming from, if it persists.

The alternator may be to blame if the noise is present just when the car is running and changes with the RPM. Installing a noise filter eliminates whining noises like this. 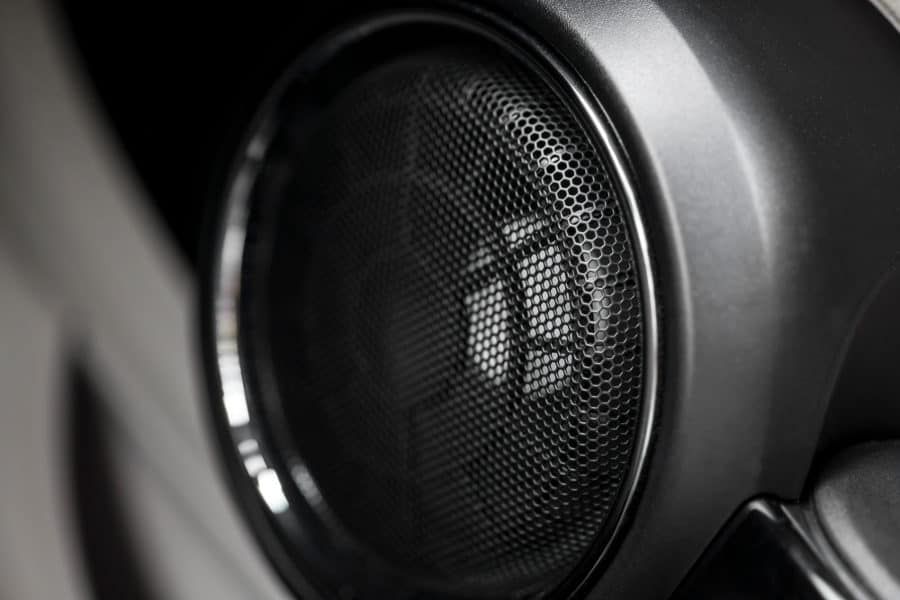 There may be an antenna problem or interference if the noise occurs exclusively when the music source is radio. If you feel confident working on your vehicle, proceed to the next stage. Pay attention to possible external electric impacts. The ground has been thoroughly inspected and is safe to walk on. The cable should be no thicker than the power cord and no more than 18 inches in overall length. Check the noise level by disconnecting the antenna. If the noise stops, the antenna is the source of the problem.

Make sure the antenna wire isn’t in contact with anything that could be generating static electricity. If everything else fails, remove the head unit and reposition the wires so they aren’t touching or too near any other wires or gadgets that might interfere. This is your sole option if none of the other options work.

Fix The Other Sources Of Noise

Your phone or CD player may have caused the issue, in which case a ground loop could be to blame. Adding a ground loop noise isolator should help you find the source of the noise and solve it. You may also want to rule out the RCA cables from the previous step. The amplifier should not come into contact with anything metal. Hoist it on a rubber frame if they come into contact. Your amplifier is to blame if the static continues.

How Do I Stop My Engine From Making Noises Through Speakers?

A ground loop isolator or an inline noise suppressor can quickly silence your engine’s speaker noise. They’re not only simple to use, but they also cost nothing. Ground Loop Noise Isolator by AUKEY has a built-in filter that eliminates all the unwanted noise from your car’s speaker. 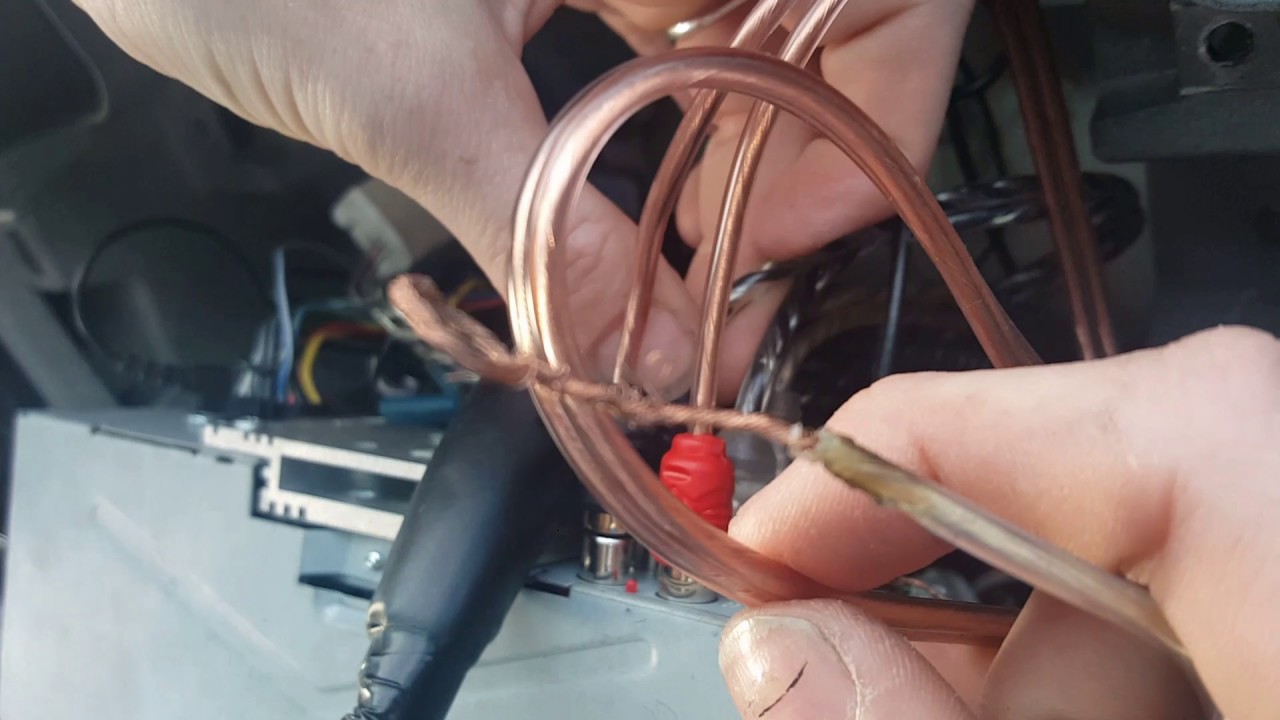 Why Do My Speakers Pop When I Turn My Car Off?

You’ll hear a pop when you turn on and off the car speakers or amplifiers. A faulty amplifier or inadequate grounding are to blame. There is an initial surge of power when the device is turned on and then a second surge when you select your preferred musical source. The speaker pops as a result of this sudden surge. When the stereo is turned off, the opposite happens. There is a possibility in both circumstances that the amplifier itself is responsible for the loud pops on the speakers.

Why Is My Car Speaker Making A Buzzing Noise?

Vibration occurs when music is played over speakers in a vehicle’s audio system. In any event, it shouldn’t be too obvious. You may have a damaged membrane if the sound is too loud for the music to mask. There is a buzzing sound when the membrane tears or has a hole in it.

Even when the engine is off, the speakers in your automobile can make noises on occasion. One of the many possible causes of this is the use of subpar speaker wiring or faulty grounding or signal interference. It’s an annoyance, but not as bad as while the car is running. Many electrical and electronic components might generate interferences owing to poor grounding, resulting in the static noise you’re experiencing.

Don’t mess with the car’s electrical system until you know what you’re doing, even if this page serves as a guide for you.

How Tight Should The Oil Filter Be?
Can You Flat Tow A Chevy Equinox
19 The Best Types Of Audi Cars On The Market
Mercedes GlS 400 4matic Launched At Rs 82.90 Lakh