Few problems are as well-known as a Subaru head gasket that has blown. When the exhaust starts to blow white smoke, you know what’s wrong, and no mechanic will be surprised.

Even though it’s a shame that cars that are otherwise reliable have such a big problem, there’s not much you can do to fix it.

But if you already drive a Subaru, what should you do? How do you know if you need a new gasket, and how much does it cost to replace? Keep reading to find out everything you need to know about Subaru head gasket problems.

What is a Head Gasket?

The head gaskets are near the top of your engine and separate the oil passages, coolant lines, and engine block. If you’ve ever seen a head gasket, you’ve probably noticed that it has both big circles and small squares cut out of it.

The pistons and the top of your combustion chamber sit in the big circles. The squares and rectangles are for your oil and coolant channels. You will also see small holes in the shape of circles for the head gasket bolts.

Head gaskets are usually made from thin sheets of metal with holes cut out for each part. The head gaskets are attached to the engine with bolts, and sometimes the manufacturer will tell you to use a small amount of silicone RTV to make sure everything fits smoothly. 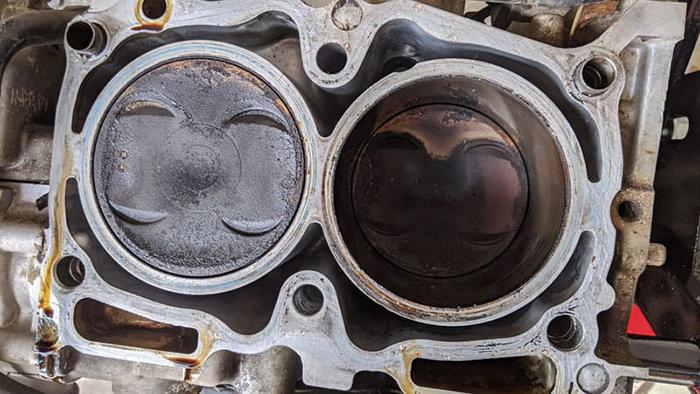 There are quite a few signs that the head gasket has blown. We’ve put the five most common ones in bold below.

It’s a sign that the head gasket has blown. Clear smoke comes from normal exhaust, and black smoke comes from fuel-rich exhaust. But when coolant burns, it turns white. So, if coolant gets into the chamber where the fuel is burned, it will make a lot of white smoke.

It’s important to remember that white smoke doesn’t always mean your head gasket has blown. Small amounts of white smoke are normal, and when it gets colder, you can expect to see more of it.

The main job of your head gasket is to keep all the coolant in the engine passages. When there’s a leak, though, the coolant goes somewhere it shouldn’t. You can take the time to figure out where the coolant is going, but if the level keeps going down, that’s the first sign that something is wrong.

If you see that you’re losing coolant, look first for a leak on the outside. If you can’t find one, a blown head gasket is most likely to blame.

Pulling out the dipstick is the easiest way to see if your coolant is mixing with your oil. If the oil is mixed with coolant, the colour of the coolant and how fresh the oil are the two main things that will change the colour of the oil.

Oil turns black when it’s used up, but if it’s dark brown instead of black, it’s likely that coolant is mixing with it. But if it’s more of a milky brown colour and there’s still coolant, the oil hasn’t been used.

Last, the colour of the coolant will change how dark the water gets. Green coolants make the oil darker than red and orange ones. Any coolant in the oil is bad, no matter what colour it is.

Your coolant’s main job is to keep your engine from getting too hot. If there isn’t enough coolant, the engine will get hotter, and if it gets too hot, it can overheat. But if the coolant leaks into the oil, it can cause two kinds of trouble.

One of the less well-known things about engine oil is that it cools the engine. When you mix coolant and oil, these effects are lessened, which makes the engine overheat faster.

Overheating an engine might not be obvious, but most new cars have sensors that will turn off the engine if it gets too hot. If this happens, it can take anywhere from three to eighteen hours for everything to cool down enough to start the engine again.

5. Bubbling in Radiator or Coolant Reservoir

It’s not the most common thing to see, but if your head gasket has blown, it’s likely to happen. Not only do head gaskets keep the coolant where it should be, but they also keep everything else out.

Most of the time, air and exhaust are the things that go through the hole. Once it’s in the cooling system, it has to go somewhere. The radiator cap or the coolant overflow hose are the easiest places for it to leave.

The bubbles will be where the coolant is leaking out, but you can only see them when the engine is running. When the engine is hot, don’t take off the radiator or coolant cap. This is very dangerous and can cause burns that are very bad. 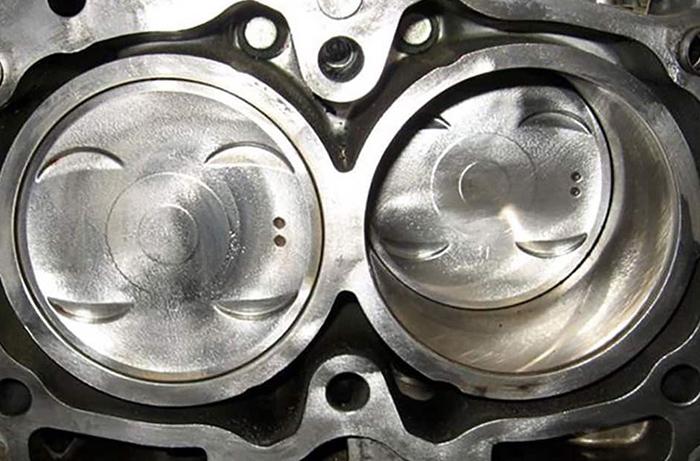 Subaru cars have had trouble with their head gaskets for a long time. It doesn’t have to be a certain brand, model, or year, and they admit that a lot of their older cars have head gasket problems between 80,000 and 100,000 miles.

If you drive any of the following cars, your head gasket is likely to blow at some point after 80,000 miles:

Of course, the problem wasn’t with the car itself. It was with the engine. Most of the time, the first-generation 2.5L engines in the Outback, Legacy G.T., Forester, and Impreza R.S. from 1996 to 1999 have leaks that lead to the combustion chamber.

This causes a lot of symptoms and major mechanical problems, such as a lot of smoke and a lot of other signs.

After 1999, many of Subaru’s engines were upgraded to the 2.2L and 2.5L engines of the 2nd generation. Even though the new engines did a pretty good job of keeping fluids from leaking into the combustion chamber, the problem moved to leaks on the outside of the engine.

These engines are known to leak oil and coolant on the outside. When you park your car for a long time, you’ll usually see puddles of water under it, which is a pretty clear sign that something is wrong.

Most Subarus that are known to have problems with their head gaskets are no longer covered by the factory warranty. But a blown head gasket is almost always covered if your Subaru is still under factory warranty or if you bought an extended warranty.

Head gaskets are a part of the powertrain, so they are covered by warranties for a longer time. But they might not honour the warranty if you have added aftermarket parts to your Subaru or don’t have a clear record of the scheduled maintenance.

Why Isn’t There a Recall?

Many car owners think that if a car has a problem that keeps happening, the company that made it must issue a recall. This is not true at all.

Manufacturers only have to call back cars if there is a problem with safety or pollution. A blown head gasket is not in this group because it is “only” a major engine part. This means that a recall isn’t required, and Subaru hasn’t done one.

Did Subaru Fix the Issue?

If the head gaskets are still giving you trouble, you can be sure that Subaru won’t help you.

How to Replace Your Head Gasket

You’ll save a lot of money if you replace your head gasket yourself. But it’s not easy by any means. It’s a very hard job that requires a lot of work, but we’ll show you all the steps before you start. If it seems like too much work, take it to a dealership or a local repair shop to get an estimate.

Before you start a repair job, you need to do your research and get all the parts you’ll need. This is important for any job, but it’s especially important for head gaskets. You usually need parts that have nothing to do with the head gasket. If you don’t get these parts ahead of time, you won’t be able to put everything back together.

Make sure to take the battery out before you do any work. You’ll be taking out and unplugging electrical parts, and removing the battery will keep more damage from happening.

Start by letting all of your fluids out. If you don’t do this, you’ll make a big mess in the future.

This advice isn’t very clear, but it’s exactly what you need to do. Take everything off the top of your engine, including the serpentine belt, the alternator, and everything else.

You need to take off the bolts in the order that the manufacturer tells you to. If you don’t do this, the cylinder heads could get bent or break.

After you take everything off, look it over carefully. Check for damage like pitting, scarring, and warping. Even though damage is unlikely, replacing the head gaskets won’t fix the problem if it does happen.

You need to clean the old head gaskets well and get rid of any leftover RTV or gunk. Make sure to clean the block with something that won’t scratch it.

Once everything is taken off, put on the new head gasket. Follow the directions on the package, because sometimes you need to use a lubricant or silicone RTV.

After putting on the head gasket, put the cylinder head back on.

10. Torque and Tighten Bolts in Sequence

When you tighten the bolts, make sure to use the right amount of torque and tighten them in the right order. To properly torque the head, you’ll need to do it more than once.

When you took off all the parts to get to the head, you probably took off a few gaskets as well. Make sure to replace them all when you put everything back together.

You need to put everything back in, including the alternator, serpentine belt, and everything else you took out.

Make sure to add both oil and coolant to your engine before you turn it back on. Before you start your engine, you’ll also need to get the air out of the coolant system.

Reconnect your battery and get ready to start your car!

Don’t rev the engine or try to get things done quickly. Start your engine and let it run at a low speed until it’s up to speed.

When you run your engine, it pushes out air bubbles and fills the filters, so you’ll probably need to add more fluids.

If you have a 2.2L or 2.5L engine in your Subaru, you might as well start saving money for a new head gasket now. Even though they say they have fixed the problem, that theory is just beginning to be tested.

If the past is the best way to predict what will happen in the future, you can expect the new gaskets to start giving you trouble after 80,000 to 100,000 miles.

Any way you look at it, replacing your head gasket isn’t cheap, so it’s best to save money in case something happens to your car.