There are nine signs and symptoms that point to a malfunctioning fuel pressure regulator. To get a defective regulator fixed, you need to know what it is and what your choices are.

For the most part, everyone knows what to do when their car’s battery runs out of juice.

In the same way, everyone knows how to fix a flat tire or a running out of petrol.

In the event that a part you have never heard of has a problem, how will you know about it?

How can I tell if my fuel regulator is malfunctioning and causing me problems?

Poor acceleration due to engine misfires.

The exhaust pipe is blazing with dark smoke.

The plugs look to be black.

The vacuum hose had gasoline in it.

The engine is having trouble starting.

Excessive noise from the fuel pump

The exhaust pipe is dripping with fuel.

Each of these will be covered in great detail in this guide. Before we go any further, let’s take a closer look at a gasoline regulator.

What Is A Fuel Regulator?

The name of the fuel pressure regulator is a fantastic way to define what it does. That’s correct, it controls the fuel pressure. In addition, the volume of gasoline delivered to the injectors is also controlled by this system (on vehicles with direct injection).

The amount of fuel an engine requires is mostly determined by the driver’s demands. Driving at 45 miles per hour instead of 60 miles per hour will save you money on gas.

There must be a precise ratio of air to fuel in the combustion chamber for optimal ignition. Running lean (not enough fuel) or running rich (too much fuel) are both examples of this imbalance (too much air).

The fuel pressure regulator is responsible for determining how much fuel is flowing through the injectors and how much pressure it has.

Let’s have a look at how a pressure regulator works now that you know what it is.

How Does A Fuel Pressure Regulator Work?

The fuel pump takes a predetermined amount of fuel from the tank when the ignition is turned on. After that, it’s filtered and sent on to the injectors via the fuel line. Once it reaches the combustion chamber, it is injected and ignited.

The fuel pressure regulator is here to meet you. If the fuel pump’s output and pressure are too high, this little but critical component prevents this from happening.

The regulator shuts off the flow of fuel if the pressure is higher than necessary and returns the excess to the tank. As a result of a problem with your fuel pressure regulator, the combustion chamber will be filled with either too much or too little gasoline.

What Are The Symptoms Of A Bad Fuel Regulator? 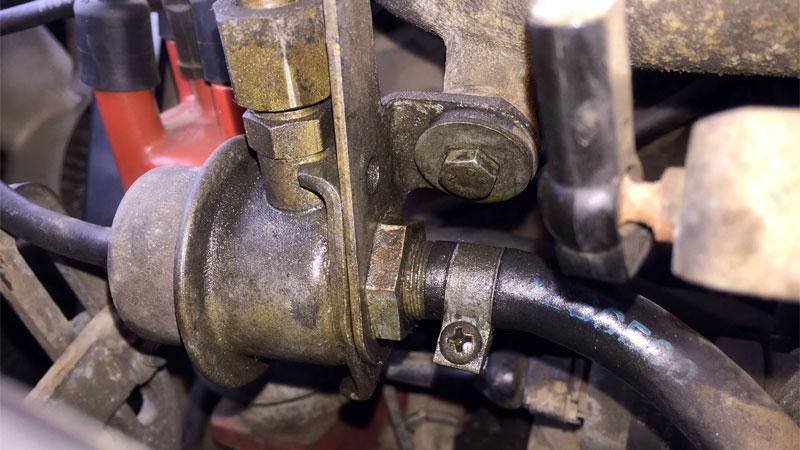 Problems with the engine’s performance, such as poor acceleration or decreased fuel efficiency

Engine misfires, sluggish acceleration, and poor fuel economy are all early indicators of a faulty fuel pressure regulator. We combine them since they are all caused by an incorrect air/fuel ratio.

If your car is exhibiting any of these signs, you should bring it in right away to avoid more damage.

Black Smoke Coming From The Exhaust

Because of the engine’s excessive fuel consumption, this symptom is evident (running rich). Black exhaust fumes are produced as the extra fuel is burned off, which can be seen escaping from the vehicle’s tailpipe.

There may be a problem with your fuel regulator if your car starts to resemble a “Stop Global Warming” campaign poster child. Even so, there’s no way to know for sure what the problem is until it’s investigated.

If the tip of the spark plug is covered with a black powder-like substance, this indicates that the air/fuel combination inside the combustion chamber is out of whack.

Fuel pressure regulators are generally the source of the problem. One or more of the symptoms on your list may indicate that you should have your fuel system checked.

Gasoline In The Vacuum Hose

As long as the vacuum hose is hooked directly to your car’s fuel pressure regulator, you’ve got an issue. Turn the vehicle off, unhook it, and examine it to find out for sure. You may have an issue with your Fuel Pressure Regulator.

Another indicator of a leaking fuel regulator is petrol trickling from the exhaust, so keep an eye out for that as well.

The vehicle’s engine has a problem and needs repair.

When you slow down, your engine may backfire if it’s running too rich. Additionally, you may notice a lag before slowing down, which can quickly escalate into a safety concern.

The fuel regulator is a relatively inexpensive component to replace, so why not fix it if it’s broken? Check out your car’s fuel pressure regulator if it begins to backfire.

The most obvious indication is a non-starting engine. The fuel regulator is responsible for giving the correct amount of fuel for any given condition, including starting the engine. It will not be able to start if there is not enough fuel.

Even if you can get the engine to run for a short time, it will eventually quit. Many causes can hinder a car from starting, so be careful to look for other symptoms on this list to be sure.

Even though the gasoline pump creates noise, it should never become obtrusive. If yours has started making a “whirring” sound, it may be in need of a replacement. A defective fuel pressure regulator, on the other hand, could be the source of the noise.

While the engine is under stress, such as when accelerating, climbing a hill, or towing a trailer, the sound should be most noticeable.

Fuel Drips Out Of The Tailpipe

Fuel dripping from the exhaust can be a sign of a faulty fuel regulator, just like having gasoline in the vacuum hose. There are various seals on the fuel regular that can leak if they are worn or damaged.

Your engine will have lower performance if it doesn’t receive enough gasoline because of the leak.

How Much Does It Cost To Replace A Fuel Pressure Regulator?

Replacement is the appropriate course of action in most circumstances if your fuel pressure regulator is found to be defective. This might cost anywhere from $150 to more than $1000, depending on the make and model of your vehicle.

However, a fuel pressure regulator replacement costs on average $250.

This is a pittance compared to what may have been if this issue had been overlooked. Due to the above reasons, it is imperative that you keep a close look out for any of the following symptoms.

What Are The Risks Of Ignoring A Faulty Fuel Pressure Regulator?

You may not see it at first, but what’s going on behind the scenes is bad for your engine.

After that, you have difficulties that can alter the car’s behavior and/or pose a safety risk. Among these are backfiring and a lack of power, as well as an engine that won’t start.

How Do You Maintain A Fuel Pressure Regulator?

Replace your fuel filter every two years or 30,000 miles to ensure that your fuel regulator lasts as long as feasible. Another option is to only fill up at gas stations with the highest grade gas on the market.

At The End Of The Day, It Could Be Worse

You have a few options if your fuel pressure regulator fails. Take it to a shop and have them test it, or do it yourself. As a result, you can either choose to acquire a replacement part on your own and replace the broken one yourself, or you can hire someone else to do it.

It doesn’t really matter whether you have a bad fuel pressure regulator if you deal with it quickly.

Top 8 Cars For Tall People That You Need Know
WD-40 On Car Paint
What Is A Fuel Induction Service?
Fastest Route To Las Vegas