Many car owners know how important it is to regularly replace the timing belt on their engine. Because of how they are made, timing belts need to be changed after a certain amount of time or miles. The tough rubber is made of cords with teeth that are reinforced with nylon. The rubber is strong, but they don’t last forever. Like all rubber items, they get weaker over time or with use.

What are the signs that a timing belt needs to be replaced, and why? Your engine’s timing belt needs to be changed often because it is put under a lot of stress over time, which makes it wear out slowly. A do-it-yourself mechanic wouldn’t be able to do it easily. To keep the engine running well and stop it from breaking down too soon, you need to be careful and know what you’re doing. At a trustworthy auto repair shop near you, there are plenty of professionals ready to help.

Some owners don’t do the right maintenance on their cars and don’t replace the timing belt when they should. If this happens, it can be several times more expensive to fix a car with a broken timing belt than if they had just paid to replace the belt.

What does a timing belt do? 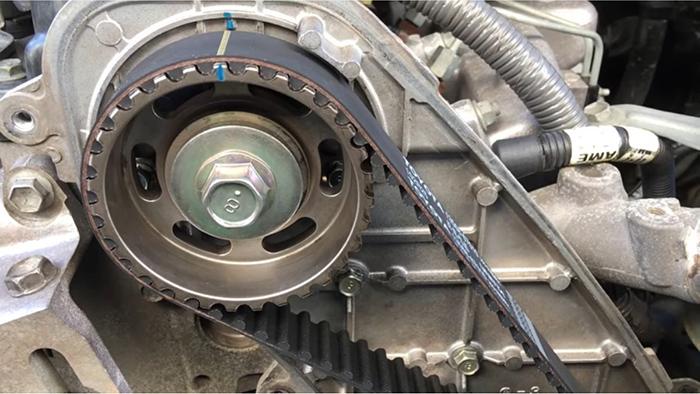 The timing belt is so important to the performance of an engine because it controls the timing of the crankshaft and camshaft. This is similar to how a conductor keeps an orchestra playing in time and in the right order.

Can a timing belt mess up your engine?

The teeth on the rubber timing belt are very important for keeping the four-stroke cycle of the engine running in the right order. To explain further, if the timing belt broke, it would not open and close the valves to the cylinders at the right time for the right amount of combustion to happen inside the engine.

It could also hurt the engine of a car with an interference engine, which would cost a lot of money to fix or replace. Some cars have engines that don’t interfere with each other. This means that if the timing belt breaks, the pistons and valves won’t hit each other. But even if your car has an engine that doesn’t interfere, you shouldn’t ignore the timing belt replacement schedule.

We’ve put together a list of the signs that a timing belt is going bad. In any of these situations, we recommend that you have an auto technician check out your car as soon as possible.

Engine misfire: If a timing belt has worn out and slipped off the gears and onto the camshaft, this is a sign that it needs to be replaced. It will make one of the cylinders open and close too early.

It’s one of the best things that could happen, because a misfire is a sign that you might still be able to replace the timing belt before it breaks and does damage that can’t be fixed.

Hunting or rough engine idling—Many drivers know that a rubber timing belt needs to be replaced every so often because of how it is made. Not as well known is what can happen to the teeth of the belt when they get old or worn out. If you don’t replace the timing belt for too long, the teeth can become weak or even fall out.

This means that the gears that the teeth of the timing belt are supposed to control could be left alone. The loose teeth could fall on the gears and make the engine run rough. It could also mess up the timing of the camshafts, which could cause the engine to stall.

Smoke from the engine or exhaust: When it’s cold outside, it’s normal for a car’s exhaust system to let out water vapour or “steam/smoke” until the engine is warm. If your car’s exhaust has a bit too much smoke, it could be because of the timing belt.

Timing belts keep the way an engine works in check. The cylinders have two holes that let air in and let exhaust gases out. The cylinders move and the camshaft turns, so the synchronised holes open and close at the same time.

Once the timing belt breaks, the holes in the cylinders no longer work in sync with each other. This means that exhaust gas will leave at the wrong times, making a lot of smoke come out of the exhaust.

The oil pressure goes down. This is the second most serious sign that the timing belt is going to break. If the timing belt breaks, pieces of the camshaft that it is supposed to turn could break off and fall into the oil pan. This will cause the oil pressure to drop, which could cause the engine to break down. Usually, the only way to fix this is to rebuild or replace the engine.

Broken pistons and valves: This is the worst thing that can happen to an interference engine when the timing belt breaks, and it is also the most common sign.

When a timing belt breaks, most people don’t know what to look for because you might hear a noise and then lose power, which could be caused by a number of things.

If you don’t notice this happening and can’t turn off the engine right away to keep the pistons and valves from getting damaged, it’s unlikely that your engine will work again until it’s fixed or replaced. Most likely, a new engine or a rebuild will be the most expensive repair you have to make on your car, and in many cases, it won’t be worth it.

When should a timing belt be replaced?

Most car makers put their own engines in their cars, so the timing belt replacement schedules are different, and we recommend that you follow the manufacturer’s schedule. Some timing belts need to be changed every 4, 5, or even 10 years. Even though some distance intervals are the same as time intervals, you still need to change it before the date it would have been due.

Still, you should always stick to the plan and never leave anything to chance. The risk and cost of not replacing the timing chain at the right time are not worth the trouble and cost of a broken engine.

How much does it cost to replace the timing belt? 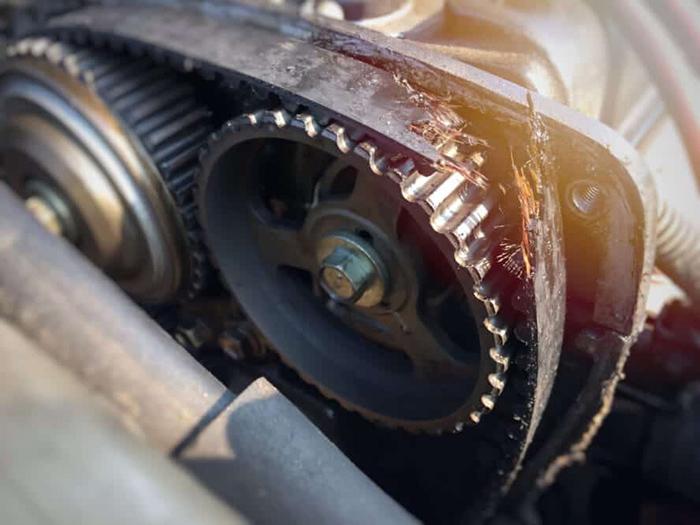 The price of a new timing belt is a small part of how much it costs to have it put on. In some cases, the belt itself will cost less than $50. The cost of labour to do the job will be between $250 and $450, though some auto shops will charge even more. Expect taxes and other fees to be added on top of this. Don’t think that replacing a timing belt is cheap. This is why some people put off changing them when they should. We don’t recommend putting off timing belt replacements because you could end up buying a new engine for a lot of money.

But some replacement timing belts are cheaper because they are easy to get to, take apart, and put back together. Timing belt replacements are usually less expensive on smaller economy cars because their engines are usually smaller. This means they take less work to make, so you pay less for them when they’re done. A smaller car’s timing belt installation could cost around $300.

But if you drive a sports car, SUV, or pickup truck with a big engine, you will pay more to have your timing belt replaced. You can expect to pay $500 or even more if the car is big or has a big engine.

What does timing belt replacement include?

Most people who work on their own cars don’t know how to change the timing belt. At an auto repair shop, this job is usually done by trained, professional mechanics. Unless you change tyres for a living, you shouldn’t try to do this at home unless you have a lot of experience doing it.

By taking off all the engine and timing covers, a mechanic can get to the timing belt and pulleys. Once the timing belt, water pump, and pulleys are visible, they can be checked to see if anything else needs to be fixed or replaced. Once the timing belt is taken off, it will be thrown away and a new one will be put on. The mechanic will usually change the tensioners, pulleys, and water pump. The mechanic will then make sure that every bolt is tightened to the right torque settings. Once all of the covers are back in place, the engine can be started and tested. The mechanic will know the job is done when he or she finds an engine that runs perfectly and at the right time.