Today, Elon Musk showed off the Tesla semi-trucks. As he had said he would, he brought us another surprise: the second-generation Tesla Roadster. Tesla Roadster 2.0 is built from the ground up and promises to sell a lot of cars, which worries the companies that already make supercars. On paper, this sports car looks like it will be the fastest mass-produced car in the world. Musk said in a joking way that this is the “smackdown” to the auto industry’s addiction to fossil fuels. (Read: Tesla’s plans to open in India have been pushed back) 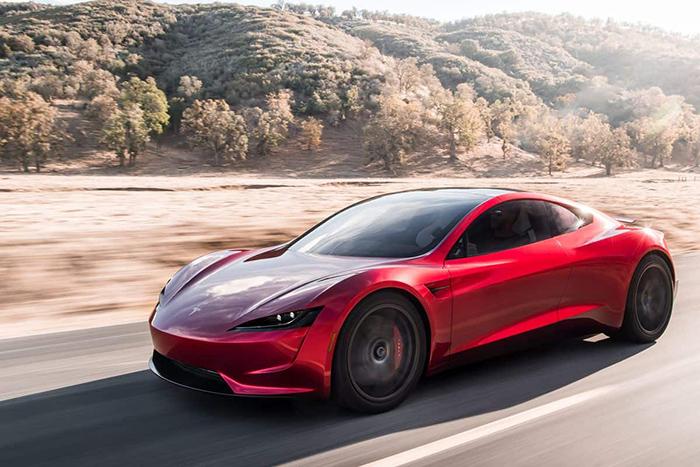 No one thought that the Roadster would be shown today. We didn’t even know that this project was being talked about. When people at the semi-truck event were about to leave, a red Tesla Roadster drove up to the stage, and Musk came back smiling to talk about Tesla’s newest sports car. He talked about it by saying that it could go from 0 to 60 miles per hour in 1.9 seconds, from 0 to 100 miles per hour in 4.2 seconds, run a quarter-mile in 8.9 seconds, and reach a top speed of over 250 miles per hour. When a random plane flew by the Tesla factory in California, he said, “It will be faster than that jet over there,” in a funny way.

People are always worried about the driving range of electric cars. Musk said that the 620-mile range will come from its 200kwh battery pack. Musk said, “Think about being able to drive from Los Angeles to San Francisco and back on a single charge.”

One motor is in the front and two are in the back of the Tesla Roadster 2.0. This is a sports car that has all-wheel drive and torque vectoring. When a car has more than one motor driving it, torque vectoring has a lot of potential. This feature makes sure that each motor gets the right amount of power so that it can turn as well as possible.

Price and how can you get one?

From 2020 on, you’ll be able to buy this two-and-a-half-seater Tesla Roadster, and prices will start at $200,000. To get on the list of people waiting, you need to put down $50,000. And if you want one of the first 1,000 cars, which Tesla calls “Founder Series,” you’ll have to pay a full deposit of $250,000. Tesla already has a long list of customers waiting for the new Model 3, which was just released (Read: Tesla Model 3 first batch delivered). Now, the Roadster might not get as many orders as the Model S, but it will still be hard for Tesla to get them to customers quickly.