A three-point turn, also called a “K turn,” is a moderate manoeuvre that involves turning a car around on the road to drive in the opposite direction when there is nowhere to pull off the road.

This is how it looks –

It is a common way to turn around when there are no roads or driveways next to or across from you that you can pull into (or off of) to make turning around easier. 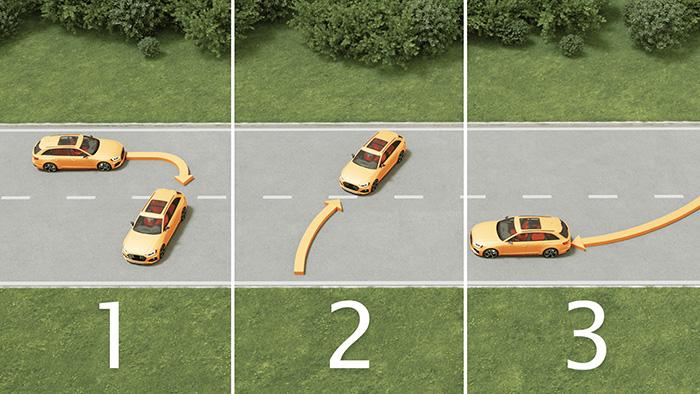 A three-point turn, also called a “Y turn,” is done by making a sharp turn, backing up, and then making a soft turn forward.

To do a three-point turnabout, you must:

As you turn toward the other side of the road, turn the steering wheel all the way to the left to make the turn as tight as possible. Stop when you can’t turn any more without hitting the curb or driving off the road.

As you back up, put the car in reverse and turn the steering wheel all the way to the right. Back up as far as you need to in order to be able to turn into the lane you want to be in.

Put the car in drive again and turn into the right lane going the other way. Keep moving.

The most common turn asked for on driving tests is the three-point turn.

Depending on where you live, this test may be done on a closed track with cones or on a public road.

To get good at a three-point turn for a driving test, drive on a two-lane road that is narrow and has little traffic.

Pick places along the road to turn around.

Once you’ve done a 3-point turn a few times, it will feel natural, like looking over your shoulder before changing lanes.

Risks of a Three-Point Turn 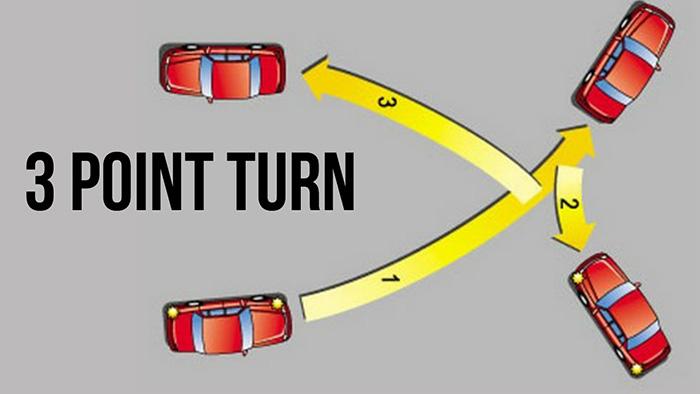 In cities and towns with regular traffic and lots of places to turn around, you shouldn’t use three-point turns.

The most dangerous thing about a three-point turn is that it leaves you stuck in the middle of the road for a long time.

Your car also blocks BOTH lanes of traffic for most of the three-point turn.

You should only use this turn on a country road with few businesses or houses and no other place to turn around.

A two-point turn is almost always the safer choice when there are other roads or driveways nearby.

During a three-point turn, other cars pose the biggest risk.

During this turn, another car could come up behind you at any time, and you would be in the way.

Because of this, the most important thing when making a 3-point turn is to always be aware of traffic coming from either direction.

Before making this turn, you need to make sure the road is clear for a long way in either direction.

Since making this turn safely requires making sure the road is clear, it should only be done on a section of road where you can see well in both directions.