Learn more about how an internal combustion engine works by knowing the distinctions between the serpentine and timing belts. The two belts are critical to the engine’s operation, although they serve separate functions.

Using the timing belt, the crankshaft and camshaft are synchronized. It’s hidden beneath a cover on either the front or back of the engine. 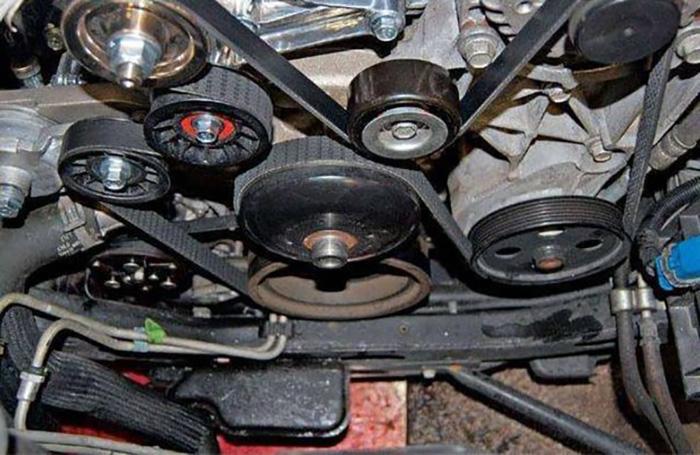 The alternator, air conditioner, power steering pump, supercharger, and water pump are all powered by the serpentine belt.

As drive belts, serpentine belts originally simply required to deliver power from the crankshaft to the water pump, alternator, and radiator fan in order to be considered a serpentine belt. In certain cars, there are only one or two drive belts, however this might vary from model to model.

The contemporary serpentine belt is designed to enhance coverage while minimizing the engine’s footprint.

The engine’s total length is reduced because just one crankshaft pulley is needed when using a single belt. Advances in technology have made it possible to separate the radiator fan from the engine by using electric motors, rather than relying on a belt.

In order to increase the amount of contact between the belt and the auxiliary system, idle pulleys are used.

The serpentine belt is divided into two sections: one on each side. Internally, the belt has grooves that run the length of it and improve traction when it comes into contact with grooved pulleys of auxiliary systems like the air conditioner, alternator, and steering.

Some vehicles use the smooth side of the belt to operate the water pump, as well as some idle pulleys.

Although the belt lacks directional grooves, the proper alignment of the belt and pulleys is critical to its proper operation. The belt should be kept under continuous tension, however the rubber will stretch with time. When the belt has to be tightened, a spring-loaded pulley called a tensioner kicks in. 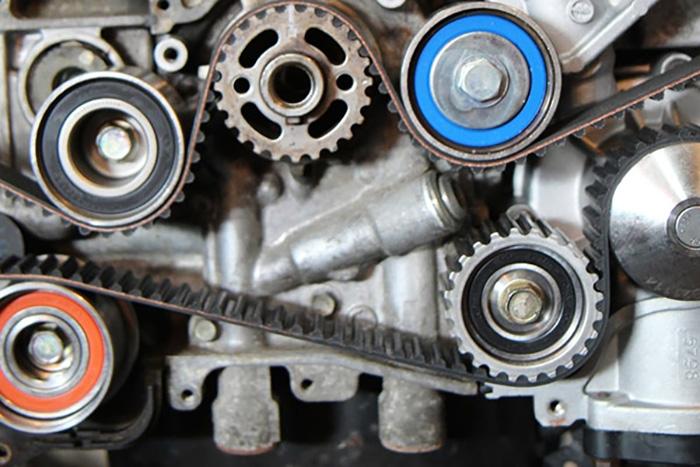 The timing belt’s sole job is to keep the crankshaft and camshaft in rhythm. All of these components are connected by a timing belt, which runs from one end of the engine to the other. In some cases, the water pump is also powered by it.

As an alternative to the timing belt, a timing chain is also used to provide the same job. Those discrepancies will be discussed in a subsequent section. Internal combustion engine operation is a fundamental part of understanding what’s going on.

The connecting rod connects the piston to the crankshaft, which is located at the bottom of the engine. The piston’s linear force is converted into rotating force via the cranking mechanism. The car is powered by a serpentine belt, timing belt, and transmission.

Depending on whether you’re using diesel or a spark plug, the air-fuel mixture is compressed by the pistons and ignited (petrol). Intake and exhaust valves must open precisely at the appropriate time in order for this to occur.

You may have figured out why we use the phrase “crank the engine”: To get an engine going in the early days of the automobile, a starting handle had to be inserted from the front and cranked.

The notion of using electrical current to automate the operation has not changed, despite the introduction of starters. Until the detonations generate enough force for the pistons to take over, the crankshaft’s initial cycle, and with it the pistons’ and camshaft’s, must be performed manually.

It’s because of the service cycle that some individuals are perplexed by the distinctions between serpentine and timing belts, or even believe they are the same thing.

The serpentine belt and timing belt replacement intervals are usually the same. It’s been drilled into me that belts need to be changed every 35, 000 to 50, 000 miles, but newer belts can last up to 100,000 miles, so it’s better to verify with the manufacturer’s recommended maintenance schedule.

Because it has a similar lifespan and can be replaced on its own, the water pump is frequently replaced as well. Doing so saves both time and money. There are a few things to keep in mind when discussing the expense of belt replacements.

Idle pulleys and belt tensioners can be replaced at the same time as serpentine belts, which can cost between $15 and $70 each. Complete kits for less than $100 are possible, as well.

Labor costs range from $70 to $150, for a total of $200. However, with a little know-how and the correct tools, this project may be completed at home for less money.

As of the date/time specified, prices and availability are subject to change. Please note that any price and availability information posted on [relevant Amazon Sites, as applicable] at the time of purchase will be applied to this product

Timing belts range in price from $50 to $100. Replacing the timing belt necessitates opening up the engine, which adds labor costs.

A new oil and filter are typically included, and other maintenance can be combined to save money. It’ll cost you between $500 and $1, 000 in labor, depending on where you put the engine and whether the belt is facing the back or the front of the machine.

Aside from belts, the timing chain is a common alternative to the belt and must be noted. The chain is more durable and is constructed of metal, as opposed to the plastic used in belts.

Please note that product prices and availability are subject to change at any time. This product’s pricing and availability will be determined by the [relevant Amazon Site(s), as applicable] information presented at the time of purchase.

As was the case with BMWs from the early 2000s, the complete engine has to be dismantled in order to get to the chain.

What Are The Symptoms of a Bad Timing Belt?

I’d like to make a point before we get into the symptoms. It is imperative that you replace your timing belt as soon as you notice any of the following symptoms:.

Regardless of the state of the timing belt, it is changed at predetermined intervals to ensure that it does not break, which can cause catastrophic engine damage or at the very least bend the valves.

When a timing belt breaks down, these are the most prevalent symptoms:

An engine rolling noise could be caused by a timing belt problem if you can tell it’s not coming from the serpentine belt. It’s possible that the computer is reporting a crankshaft/camshaft problem, which could cause a sluggish start and misfires.

You should not put your trust in these indications because timing belt failure often occurs without notice. A maintenance log and a maintenance program are the only surefire ways to avoid major engine issues.

The VW Passat I owned a few years ago was nearing its timing belt change but was otherwise in fine working order. To avoid the hassle of replacing the belt, I decided to list the car for sale with a disclaimer that it needed to be serviced.

My suggestion to the new owner was ignored, and the timing belt snapped after only six months. There were only a few of times in a million that the engine was completely unscathed, but it was fortunate.

Are the drive belt and the serpentine belt the same?

In a technical sense, yes, due to the widespread use of the serpentine belt as a drive belt. However, old vehicles did not have serpentine shaped belts and instead used simple 2 or 3 point drive belts.

Is the drive belt the same as the timing chain?

They are not, and you’re probably thinking of the drive belt that serves the same function as the timing chain but is made out of different materials.

If you’re interested in learning more about automobiles, trucks, and SUVs, have a look at our list of articles and see if anything piques your interest!

Can You Mix 5w30 And 10w30
California Window Tint Laws That You Need Know
How To Calculate Fuel Consumption
How To Hide A Key?