Before you spend a lot of money on a new Sienna, you should find out exactly what you’re getting. Towing capacity is an important feature for people who like to go on trips or explore the outdoors.

When it is properly equipped with the towing package, the Toyota Sienna can pull up to 3,500 pounds. This package is now standard on all 2021 Sienna trim levels. In the past, it was an add-on that you could choose to get.

So, there’s a lot more to think about if you want to safely pull something with your Sienna. In this article, I’ll go over everything you need to know to safely pull a trailer.

Toyota Sienna: What to Know Before You Tow 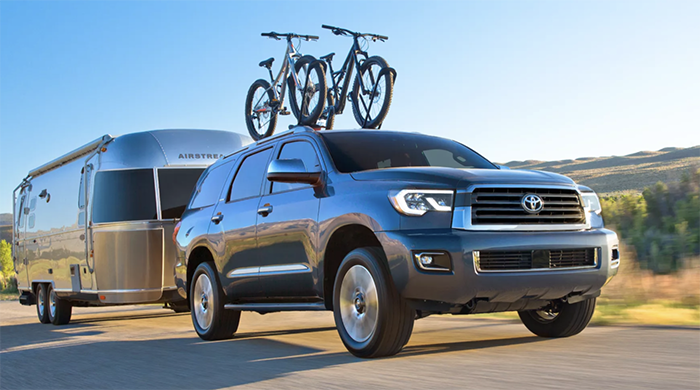 Since about 2001, most Toyota Siennas have been able to pull a wide range of heavy trailers weighing up to 3,500 pounds. In fact, you might be surprised to learn that it’s better than a number of pickup trucks, even Toyota’s own tough Tacoma!

Even though the Toyota Sienna has changed a lot over the years, one thing has stayed the same: its towing capacity, which is a good thing.

But before you start towing, there are some things about the Toyota Sienna you need to know to keep you and your car safe.

The amount that the trailer or whatever else you are pulling puts on your hitch is the tongue weight.

According to the manual, you need to make sure that the tongue weight is between 9 and 11% of the weight of whatever you’re towing.

If you don’t, you might not have a stable trip, and the thing you’re pulling, like a trailer or a small speed boat, might start to shake.

The GVWR is the maximum weight the Sienna can hold without anything else on it. This number isn’t advertised by Toyota, but you can probably find it on the inside of your Sienna’s door.

The Gross Combined Weight Rating (GCWR) is how much your Sienna can carry all at once, including passengers, cargo, and the trailer or boat you’re pulling. Just make sure that your totals don’t go over the GCWR, or you could break down on the road.

You may have noticed that the newer Siennas have engines that are a mix of gasoline and electricity. The hybrid from 2021 does have less horsepower than the all-gasoline models that came before it.

Most of the time, less horsepower means less towing power. But since electric engines are built differently, the hybrid model doesn’t lose any torque!

Between the accelerator and the wheels turning faster on a gas-powered engine are a lot of different parts. Not so much with the electric engines.

It’s a direct link that saves power and gives you the same amount of torque and pulling power as gasoline models.

Now that you know what makes each Toyota Sienna model year different in terms of specs and features, it’s time to look at what they all have in common: their towing capacity.

All three of these versions of the Toyota Sienna can pull up to 3,500 pounds.

The only catch is that if you have a Toyota Sienna from before 2021, you have to buy a tow package.

Tow packages for the Toyota Sienna include a transmission cooler, a heavy-duty battery, a 130-amp alternator, and a cooler for the engine oil.

Without this tow package, you’ll only be able to pull just 2,000 pounds.

Toyota made a great change in 2021: the tow package is now standard on all trim levels of the Sienna. To make a secure connection, you will still need to add the optional “Tow Hitch Receiver” receiver package.

If you like to do things yourself, you could also buy the trailer hitch from etrailer.com and put it on yourself.

Is a Toyota Sienna Good for Towing? 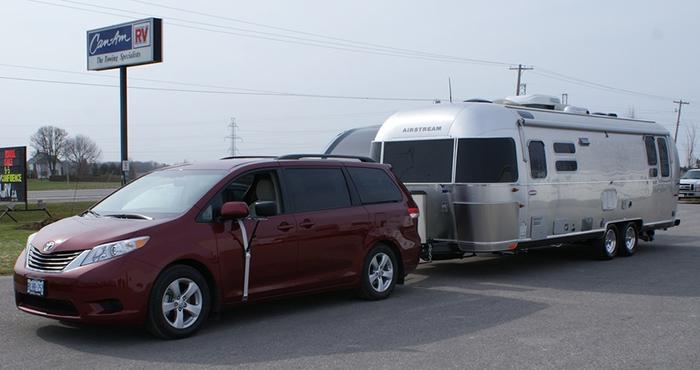 With a towing capacity of 3,500 pounds, the Toyota Sienna is a good vehicle for pulling things behind it.

With the Toyota Sienna, you can add a towing package that gives you a cooling system for the engine oil, a high-speed fan, and a radiator, all of which help towing go smoothly.

The engine of a Toyota Sienna makes it even better at towing. I’ll talk more about the Toyota Sienna’s engine in the next section. For now, let’s find out if it can pull trailers, campers, and boats.

Can a Toyota Sienna Pull a Trailer?

If you often travel or go camping with a trailer, you should check the Toyota Sienna’s towing capacity to see if it can handle the weight of the things you want to pull. You might want to know if a Toyota Sienna can pull a trailer for camping.

Most trailers are lighter than the most weight a Toyota Sienna can pull. The length of a trailer will determine how much it weighs.

Here are some average trailer weights for small, medium, and large trailers:

Can a Toyota Sienna Pull a Camper?

Both in length and weight, campers are often the same as trailers. Follow the limits of what your Toyota Sienna can pull, and check the owner’s manual for your camper to find out how much it weighs.

Your camper can’t weigh more than 3,500 pounds. If so, a Toyota Sienna is a great choice for pulling your camper.

But if your camper weighs close to the limit, you might want to install trailer brakes. If you don’t have these brakes, you might only be able to lift up to 1,000 pounds. That’s less than a third of what you might expect, so check your manual before towing.

Can a Toyota Sienna Pull a Boat?

Most boats weigh about 2,200 pounds, which is light enough for a Toyota Sienna to pull. But many boats are bigger than what a Toyota Sienna can pull, so the real question is what kind of boat you want to pull.

Sailboats can be as light as 100 pounds or as heavy as 30,000 pounds. Keeping this in mind, a Toyota Sienna can only pull small or medium-sized sailboats. In the same way, a Toyota Sienna is often too light to pull a yacht or speedboat.

You should be able to find out how much your boat weighs by looking at its manual or the manufacturer’s website.

Pro tip! Don’t forget to include the weight of the fuel in this calculation. Their specs will probably say how much it weighs when the tank is empty. Add the number you get by multiplying the tank’s capacity in gallons by 8 pounds to the boat’s weight.

As long as your boat fits within the limits of the Toyota Sienna’s towing capacity, you can be sure that towing a boat is safe.

Other Cargo a Toyota Sienna Can Tow

I’ve talked about the most common things a Toyota Sienna can pull, but a 3,500-pound towing capacity can get you a long way. At this amount of pulling power, you’ll be using a Class II hitch.

The Toyota Sienna should have no trouble pulling motorcycles or other smaller vehicles. A Toyota Sienna can also pull smaller off-road vehicles, like an all-terrain vehicle (ATV).

If you need to travel in the snow, you’ll be glad to know that the Toyota Sienna can also pull your snowmobile.

What Makes the Toyota Sienna Towing Capacity so Impressive?

The most horsepower that this engine can have is 243. The estimated miles per gallon of a Toyota Sienna engine is also surprisingly good. On highways, a driver can expect to get 36 miles per gallon.

Enhance Your Toyota Sienna Tow Capacity With a Hitch

This piece of gear will be the link between your Toyota Sienna and whatever you want to pull behind it. So, it is important to make sure that your hitch system is securely attached to your vehicle.

There are many different kinds of hitch devices, so if you’re not sure which one is best for your car, don’t be afraid to ask at the dealership. But you shouldn’t have to worry about this because most Toyota Siennas come with a hitch if you buy the tow package when you buy the car.

Because a Toyota Sienna can’t pull more than 3,500 pounds at once, the hitch you get is called a Class II trailer hitch. These are made for vehicles that can pull a trailer that weighs up to 3,500 pounds (gross trailer weight).

Overall, a Toyota Sienna has a very high towing capacity, which means it can pull trailers, campers, and boats. A Toyota Sienna is a great car for moving both your family and big things.

What Is A MAF Sensor Problem?
Which Gas Station Has The Best Quality Gas
Can You Start A Car In Neutral
Honda Radio Code Error E