Leaks are one of the most common things that happen to old cars. It can be hard to figure out where the leak is coming from, but sometimes it is easier than you think to figure out what is leaking.

Look at what colour the fluid is. It is transmission fluid if it is red. Even though a leaking transmission might seem like a big problem at the time, it’s probably just a small problem that can be fixed without breaking the bank.

You can get your car back on the road quickly if you work hard and do some research. Here are the five most common reasons why transmissions leak and how much it usually costs to fix each.

But even if the mechanic puts everything in the right way, the oil pan gaskets will wear out and leak before too long.

If the oil pan for your transmission is leaking, you should not ignore it. Even though it might not be a big deal right now, you never know when a small leak will turn into a big one. You can keep driving with a small leak, but if it blows out, you’ll have to wait for a tow truck to get you out of trouble.

Sometimes you’ll need a real oil pan gasket for the transmission, but most of the time, manufacturers suggest using RTV to seal the oil pan. Whether you need a gasket made for your car or a tube of RTV, parts usually cost less than $20.

Even though changing your transmission fluid and filters might cost more up front, it resets when these parts need to be serviced again.

When all of these things are taken into account, most mechanics will charge between $150 and $500 for labour and parts.

Even though it may not seem like much, transmission drain plug gaskets that don’t work are more common than you might think. When you take out the drain plug, you should check the gasket to make sure it’s still in good shape.

Even more important, when you put the drain plug back in, you need to make sure to put the gasket back in. Without the drain plug, all of the transmission fluid will leak out of your car in a day or two.

But if no one has worked on your transmission in a while, it’s not likely that the oil pan gasket is the problem. Most of the time, these gaskets get broken during repairs. Since they are not near any moving parts, they don’t wear out very often between services.

Fluid Lines Are Loose or Cracked

There are a lot of lines and hoses that go from your transmission to a lot of different parts. When these lines and hoses get old, they can crack and dry rot, which often leads to a leak. If a hose is leaking, do yourself a favour and check the connection and fittings to make sure they are tight.

Most hoses have loose clamps that let water out. If that’s the case, all you have to do to stop the leak is tighten the clamp.

The cost to fix a hose can range from $20 for a small hose to $250 or more for a transmission line. When you change a hose, you usually lose some transmission fluid, but you don’t usually have to drain the whole system.

Including the cost of labour, a mechanic could charge between $75 and $600 to replace a transmission line or hose. Even though this is a big difference, some hoses are only a few feet long, while others can go the whole length of your car.

Some hoses are made of rubber, while others are made of metal. This makes things even more complicated. Both types of hoses will wear out over time, but the costs to replace them are very different.

This makes it hard to figure out how much a repair will cost if you don’t know what part needs to be replaced. 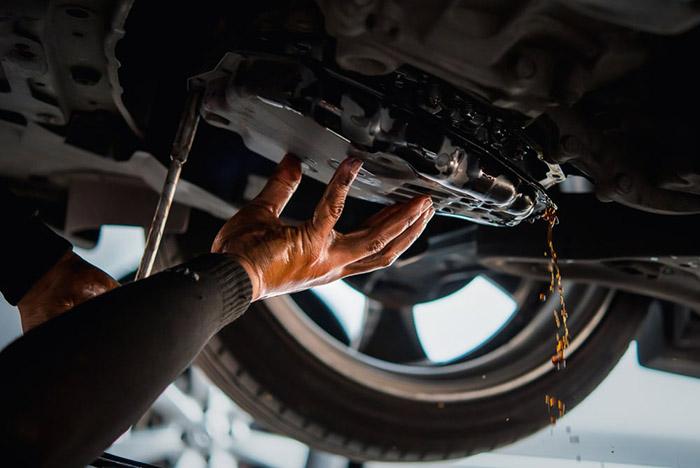 They are around parts that move and are open to the elements. They are just rubber seals. As this rubber wears down, small cracks often appear, which is where the transmission fluid starts to leak from.

Even though these seals rarely completely blow out, they often crack and have small leaks. And if you don’t replace these seals when they start to leak, they’ll only get worse, which can lead to a full blowout down the road.

Even though the seals themselves aren’t very expensive—they usually cost less than $20—the cost of labour to replace them is usually quite high. That’s because the whole transmission usually has to be taken out, which takes a lot of work.

Also, all of the transmission fluid will have to be drained and replaced, which will add another $20–$50 to the cost of fixing the car. If you hire a mechanic to do the job, the total cost, including parts and labour, should be between $200 and $250.

It might sound like a lot of money, but it’s a lot cheaper than having to replace your whole transmission, which could happen if you don’t fix your transmission when the leaks are small.

A cracked transmission or torque converter is the worst thing that could happen. This is because it can’t be fixed. You will have to get a new one. Even if you do the job yourself, it will cost you a lot.

On average, a new transmission costs about $2,500, but depending on what you drive, it can cost up to $3,500. After that, you still have to pay for the labour to replace your transmission. This usually costs between $4,000 and $8,000 for the whole job.

On the other hand, it usually costs between $600 and $1,000 to have a mechanic do it for you. Even though it is not a cheap job, it is much cheaper than having to replace your whole transmission. The good news is that you don’t have to do these jobs very often because your transmission and torque converter are two of the most durable parts of your car.

Take a deep breath and try to calm down the next time you go out to your car and see a pool of red fluid under it. Even though it could cost a lot of money, it’s much more likely to be a small fix that won’t cost more than a few hundred dollars.

Even though you probably don’t want to spend your hard-earned money on it, it’s not the end of the world! Even better, if you are willing to do the work yourself, you might be able to get everything back to normal for less than $100!

Take a look and get your vehicle back on the road!