Honda’s 600cc engines have been used in the Moto2 racing series for a long time. But now it’s time for Triumph to take over. The British company said it will be the only engine supplier for the Moto2 spec from 2019 on. The 2017 Triumph Street Triple is powered by a brand-new engine with three cylinders and 765cc. This engine is getting all the attention. The Moto2 spec engine will definitely be better than the stock engine in the Street Triple RS, which makes 120PS of power. (Also see: The 2017 Street Triple is now taking reservations.) 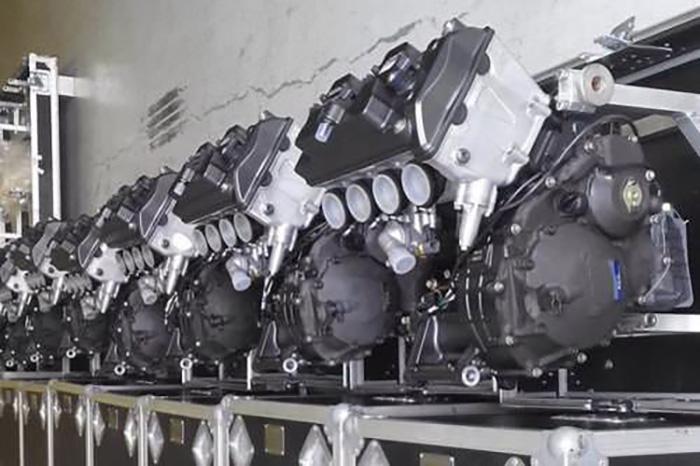 The Moto2 engine has been changed by adding titanium valves, a stiffer valve spring, and a new cylinder head with redesigned inlet and exhaust ports to improve performance at high rpm. The engine will be paired with a taller first gear to make it easier for the engine to switch from first to second gear. Also, a low output alternator race kit will help the engine start up faster and allow the engine cover to be smaller, which will make room for the extra lean angle. Between the engine and the gearbox is a slipper clutch that was made for racing and can be changed.

The race bikes will have a special ECU from Magneti Marelli that can also log data. With all of these changes, the 2019 Moto2 bike looks like it will have more than 150PS of power. Triumph, on the other hand, is being modest and saying that the first Moto2 engine will have 133PS of power and 78Nm of torque.

Julian Simon, who used to be the 125cc GP World Champion and is now a Moto2 contender, used a Triumph-made chassis to test the new Moto2 engine. The Spaniard said, “The engine feels strong, and the mid-range is especially impressive.” “There is a very direct feeling between the throttle and the back wheel. Overall, it feels very good, and the engine is already showing a lot of promise.”

Components Of ABS System
How To Make A Car Faster
Frozen Gas Lines: Signs And Symptoms
How Long Do Snow Tires Last