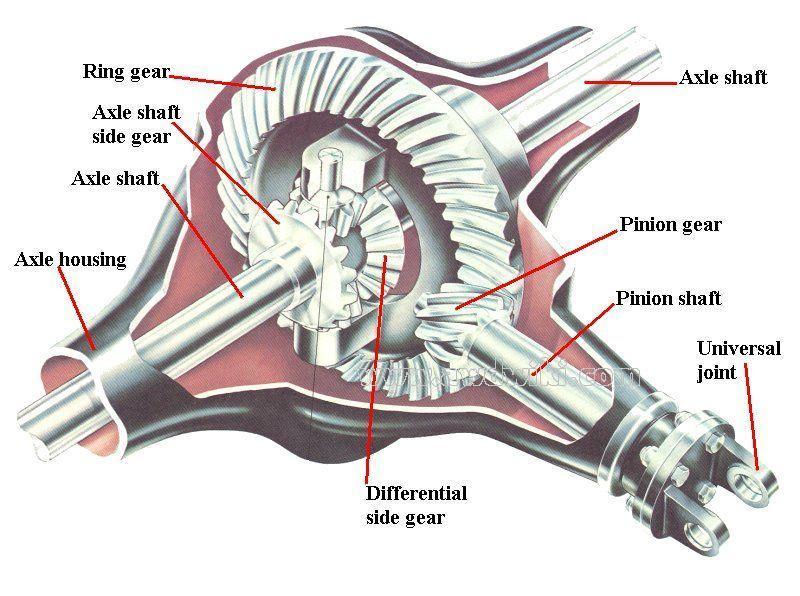 A differential is a mechanism that allows your vehicle wheels to rotate at different rates when you are taking a turn or on uneven surfaces (think of speed bumps). A differential allows for one wheel to travel farther than the other without binding the axle and causing your vehicle to jam, skid or “get stuck”. Most vehicles have a differential at the rear wheels, but some all-wheel drive and four wheel drive models feature differentials on the front axles as well.

Differential is a mechanism that enables both the driving wheels to rotate at different speeds. If the wheels on an axle are rotating at the same speed, there will be no movement forward. As you drive your vehicle, you have to fight this effect all the time. Understanding how differentials work can make you understand why we need them and also how they can be improved.

How a Differential Works

For cars, the differential is located at the rear end of the vehicle. The main use of a car’s differential is to allow the two wheels on an axle to turn at different speeds while providing equal torque (or power) to both wheels.

This way, when you are taking a turn, each wheel can travel its own distance without needing to slow down or speed up while the other wheel travels a lesser distance. The differential actually allows for each driven wheel to rotate at different speeds when necessary, so that all four tires can have maximum traction.

There are different types of differentials and they can be classified based on the source of the torque applied to the differential. 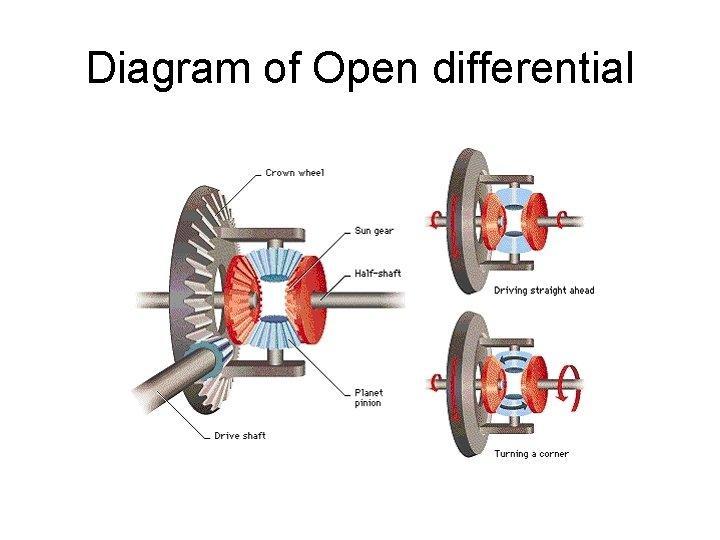 A common type of differential found in cars, the open differential allows for both wheels on an axle to rotate at different speeds while also transferring equal torque to both wheels. This is how a typical car normally works.

This would cause an open differential to send all of its power to just one wheel and stop providing power to the other wheel. 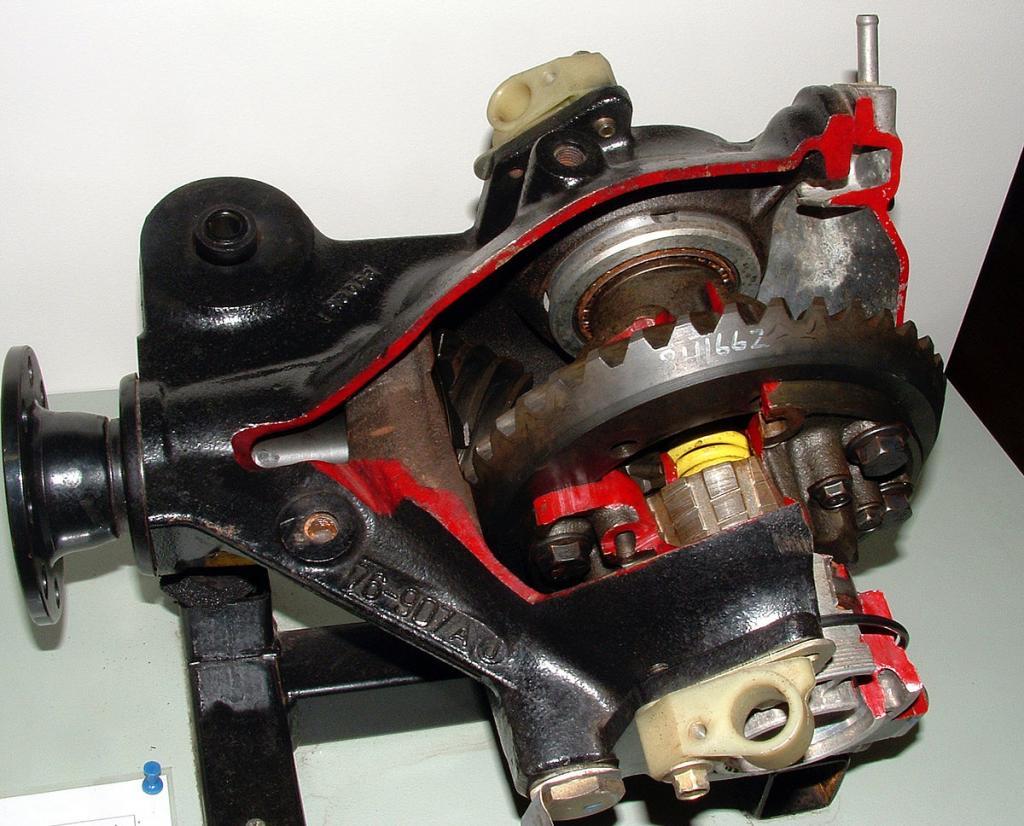 The Limited Slip Differential has a mechanism that allows torque to be applied to the wheel with less grip. This is achieved by the LSD’s clutch packs and/or sprag clutch, which are engaged when torque from one wheel exceeds that of the other. In some cases, an additional device called an Anti-Lock Brake (ABS) also works together with the LSD to prevent one wheel from completely locking up.

LSD’s can be seen in most performance vehicles that have rear-wheel drive and live axle suspensions. They provide better traction when you lose grip of the road because they work by reducing unwanted differences between wheels on an axle. 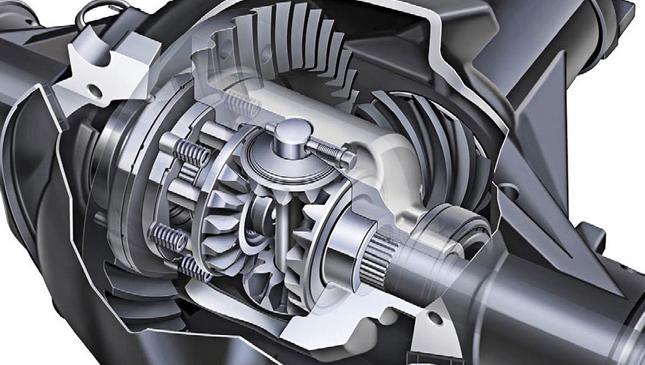 The Locking Differential is actually an Open or Limited Slip Differential that has been further equipped with a locking mechanism which locks both wheels on an axle together when the operator desires. It disengages automatically once the vehicle reaches speeds of approximately 45 MPH so as to prevent accidental skidding due to reduced traction. The Automatic Differential also known as the Continuously Variable Transmission (CVT) is actually a limited slip differential that has no manually-operated locking mechanism. Instead, the CVT uses special internal gears that allow for automatic “soft” locking of an axle to ensure maximum traction in slippery conditions.

The CVT is constructed with two high-traction worm gears that are connected by a differential carrier with small teeth which mesh with larger-sized, low-traction worm gears on both sides of the axle. When one set of worms is turning at a low speed and the other set is turning at a high speed, torque (power) is transferred to both side wheels through the differential carrier. 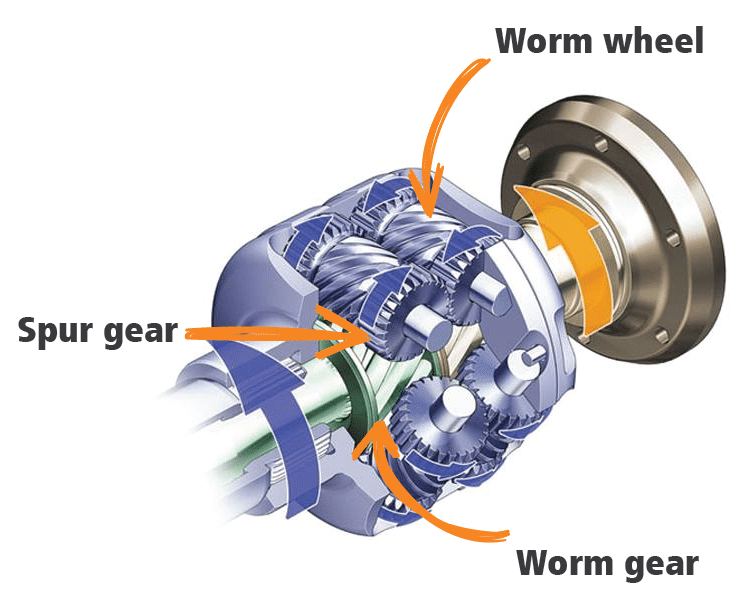 The designers of Torsen Differentials have also incorporated their product with “brake lock” control so that both wheels on an axle do not rotate at different speeds during braking. This is because when one wheel starts to slow down, the elastic couplings in the Torsen Differential are stretched causing it to lock both wheels together.

Torsen differs from conventional Limited Slip differentials (LSDs) because of its ability to transfer more torque from a non-gripping wheel to a gripping wheel. It has a higher locking force when it is in action and the manufacturer claims that it can lock 100% of torque to one wheel. 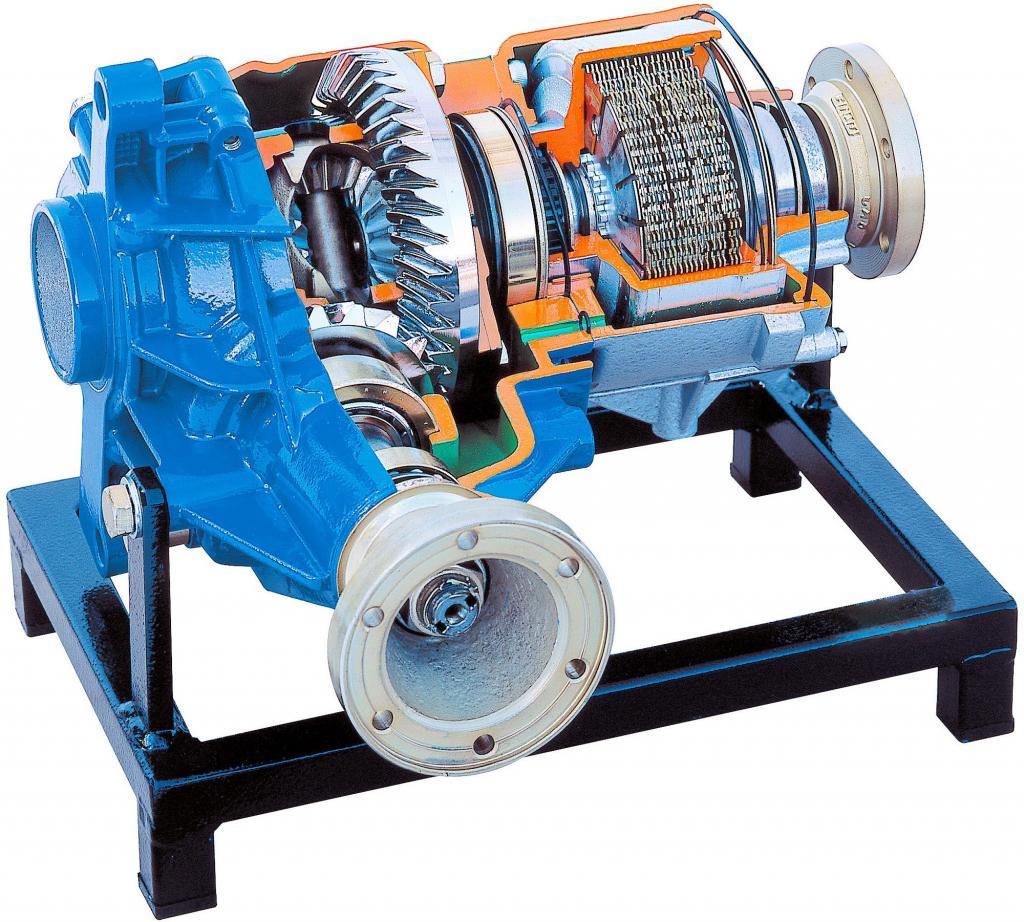 The Viscous Coupling Differential is most commonly found in heavy construction equipment like cranes, tractors and bulldozers. While some motor vehicles also use Viscous Couplings to transfer torque between their axle shafts, they are not as common because conventional mechanical-type differentials often prevent the wind-up of torsional stress which occurs inside viscous couplings. This can cause them to burn out rather quickly.

Viscous Couplings add resistance to the rotation of wheels on a single axle and this resistance is proportional to the speed difference between the wheels.

Viscous Couplings are most commonly found in construction equipment such as cranes and bulldozers; however some cars may also use viscous couplings. 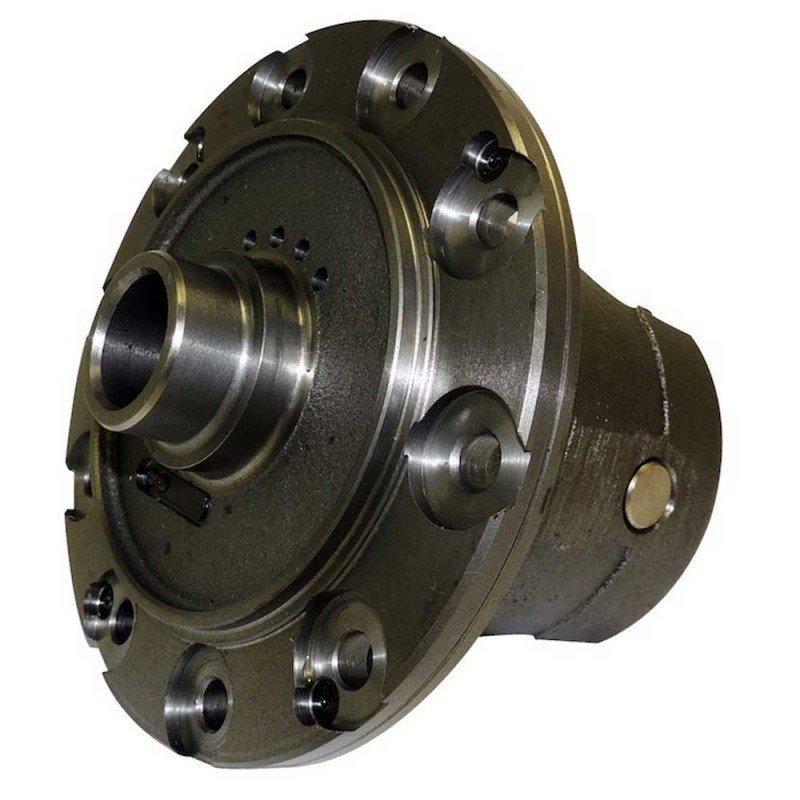 The Vari-Lock Differential works on a completely different mechanism compared to conventional mechanical-type differentials. It utilizes the combination of an internal planetary gear set with a Viscous Coupling and is commonly found in four wheel drive racing cars since it can be easily engaged or disengaged while on the track.

Vari-lock eliminates slippage of an axle in both the front and rear axles. The Vari-Lock is capable of applying higher locking forces than conventional mechanical LSDs and operates much faster than viscous couplings. 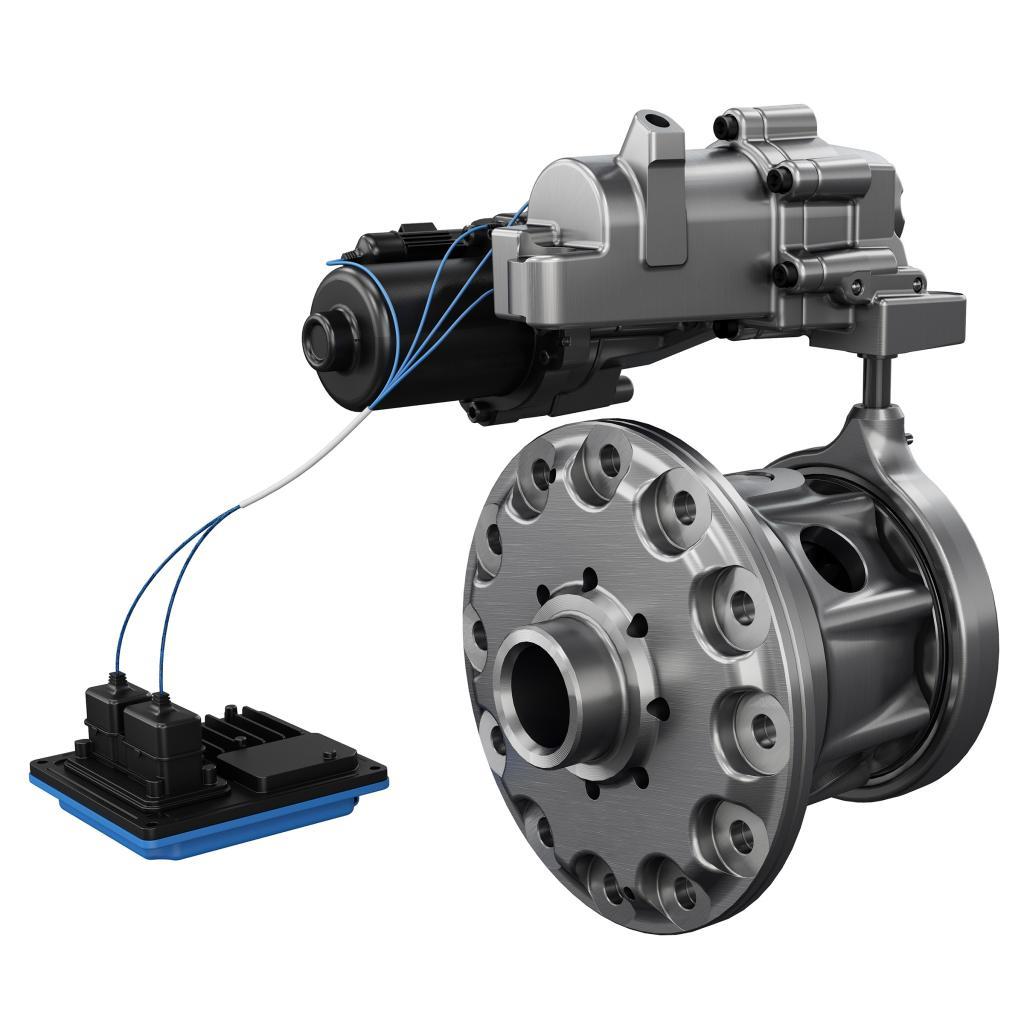 The Electronic Differential Lock is most commonly found in Japanese manufactured rear wheel drive cars, but some high end four wheel drives also use EDLs as well. The EDL system uses an electronically controlled hydraulic mechanism to lock the differential.

In addition to providing better stability by controlling excessive wheelspin, it also improves traction for vehicles with open differentials by allowing them to transmit more torque when one wheel is off the ground.

The EDL system is usually found in front wheel drive cars these days, but the principle is similar to that of conventional LSD. There are however some significant differences between the two.

While conventional LSDs lock up and engage when a speed difference occurs between wheels, the EDL mechanism begins working only after sensors detect spinning or loss of traction. 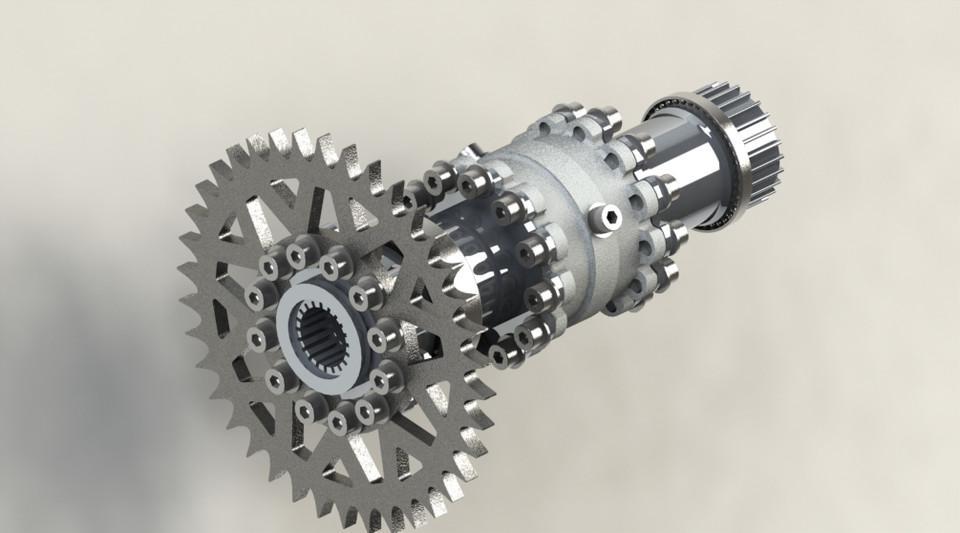 The Drexler Differential is a variation of an LDF. It features an internal planetary gear set with a clutch pack and viscous coupling that operates at high speeds, where friction characteristics are too low for conventional mechanical LSDs to be effective.

As with the Liqui Moly Limited Slip differential, when the clutch is not in use, the Drexler Differential works like an open differential. However, when it comes into use, there is a possibility of locking occurring since components within the gear box are engaged and locked.

An active differential is a more advanced style of limited-slip differential that relies on electronic sensors to actuate a hydraulic pump and control the power to individual drive wheels. The force of the pump pulls differentially forced fluid through an orifice in one side of the differential.

As the system’s name suggests, active differentials are generally only found on high-performance cars like sports coupes, and can also be set to deliver no torque at all, acting like a traditional open differential. 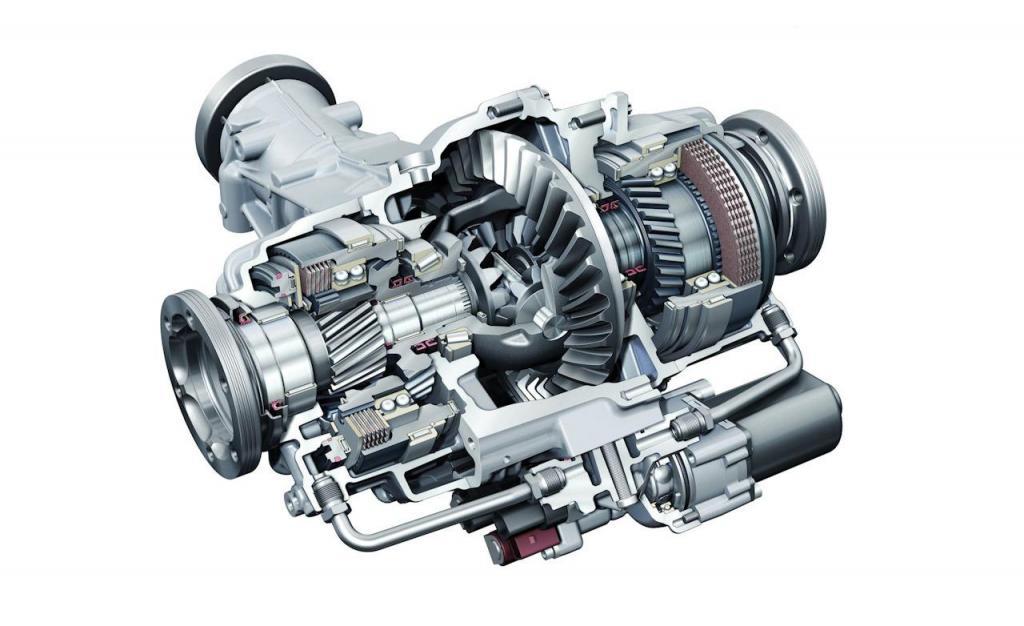 A Torque Vectoring Differential, or TVD, is an advanced type of limited-slip differential that combines both mechanical and electronic components to ensure optimum traction. Most traditional LSDs are “open” differentials; they transmit power evenly between the left and right wheels, regardless of individual wheel speed.

TVDs on the other hand, use a combination of electronic sensors and hydraulic valves to only allow more torque transfer when wheelspin is detected.

TVDs are more complex and costly than standard LSDs, but provide superior control. TVD is praised for its ability to transfer power front-to-back as well as side-to-side. However there is a common misconception that TVDs only work with 4WD drivetrains. While 4WD systems benefit from TVD, a front-mid engine rear drive vehicle can still get the same benefits by incorporating an electronic LSD with built in sensors into the differential, instead of having separate sensors for each wheel.

What is the cost to repair a limited slip differential? Can I do it myself?

What is the environmental impact of lubricating a limited slip differential?

LSDs are filled with gear oil – like transmission fluid, which is a petroleum based product. Petroleum products include many different chemicals and toxins that are harmful to our environment and our health.

Are limited slip differentials meant for racing only?

No. Differential technology isn’t just used in racing. In fact, since the launch of electronic differentials, their popularity has rapidly grown among street car drivers looking for a more balanced and fun driving experience.

Does my vehicle need an LSD?

You should consider the benefits of a Limited Slip Differential if you’re looking for an upgrade that will maximize tire grip and in turn improve performance. LSD’s are designed to help prevent wheel spin by allowing drive power to transfer from slipping wheels instead of being wasted through tire slippage.

What types of vehicles have Limited Slip Differentials?

Virtually all passenger cars use differentials, but only a few factory-equipped models are equipped with Limited Slip Differentials. Most cars with LSDs are performance or “sports” vehicles.

How do I know if my limited slip differential is working? Is there a test?

The best way to tell if your LSD is working properly is by putting the vehicle through its paces. When performing hard cornering, acceleration, and launching maneuvers you should feel a smoother, more consistent performance from the drive wheels.

Is there anything wrong with my differential if it doesn’t have limited slip?

Yes. A standard open or solid axle won’t offer any of the benefits provided by LSDs – such as less wheel-spin and better traction in corners – even if it’s “equipped” with traction control.

Where can I find out more information about differentials?

There are many resources available to learn more about LSDs. Consulting a mechanic may be helpful in determining what type of differential will best suit your requirements, and when it is required for the vehicle to be serviced.

As we mentioned above, differentials are something everyone should know about because they can have a great impact on your driving experience. This article is meant to be only basic information and just scratching the surface of what types of differentials. Hope this article will useful and give more informative to you!

Types Of Emergency – Ultimate Guide
How Many Different Types Of Ice Are There?
Types Of Flags And How To Use Them
New Brakes Squeaking: How to Handle