The Indian tyre business is growing quickly. Today, you can buy any kind of tyre in India, from a cheap one for a scooter to one for a Lamborghini. Some tyre brands do very well in the Indian market. Here are some well-known brands of tyres: 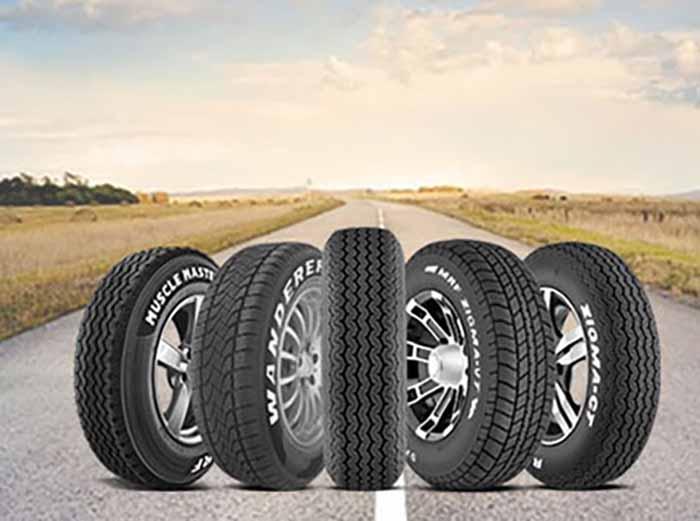 MRF is another name for Madras Rubber Factory. MRF makes more tyres than any other company in India. It is part of the tyre rubber products industry. Its main office is in Chennai, and it offers services all over the world. It is an Indian multinational company that is ranked fourteen in the world for making tyres. It makes things out of rubber, like tyres, conveyor belts, tubes, and many other things.

K.M. Mammem Mappillai started MRF tyres in 1946 in Chennai, India, with a company that made toy balloons. In 1952, the company also started making thread rubber. In 1960, the company was set up as a private company. Later, it started working with a US company called Mansfield Tyre & Rubber Company in a partnership.

The MRF Tyres Company makes a lot of different things, like tyres for cars, buses, trucks, two-wheelers, tractors, and other vehicles. It also makes paints and Pretreads and conveyor belts. MRF Company also makes things like cricket bats, gloves, pads, and other items for cricket players. MRF tyres are currently sponsoring players like Virat Kohli, AB de Villiers, and others.

MRF tyres do very well on the market in India and in many other countries as well. It has been the market leader in India for 32 years and is one of the top 20 tyre makers in the world. Still, the high rise in prices in the economy is making things hard for the company right now. The amount of money made is $3.3 billion until 2017.

Find out how to rotate tyres so they wear evenly.

The company started out as a Public Limited Company in 1972 in Perambra, Thrissur, and Kerala, where it set up its first manufacturing unit. It later got a certificate that said it was ready to start doing business. Also, in 1977, it opened a second factory in Limda, Gujrat. Later in 1995, it bought Premier Tires Limited (PTL), which led to the opening of its third plant in Kalamassery, Kerala.

Apollo Tyres joined forces with the Dutch tyre company Vredestein Banden B.V. (VBBV) in 2008. This helped Apollo Tyres grow its market in Europe. In 2013, the company also sold the Dunlop brand in Africa and most of its business in South Africa to the Japanese company Sumitomo Rubber Industries.

Currently, Apollo has two tyre factories in Europe, one in the Netherlands and the other in Hungary. In 2016, the company signed an MoU with the Government of Andhra Pradesh to set up a new factory there for the manufacturing of two-wheeler tyres and pick-up trucks. The company gets 69 percent of its revenues from India, 26 percent from Europe and the rest 5 percent from other units. According to 2018 reports, the company profited with a whopping amount of US$ 2.4 billion.

Learn how to increase tyre life 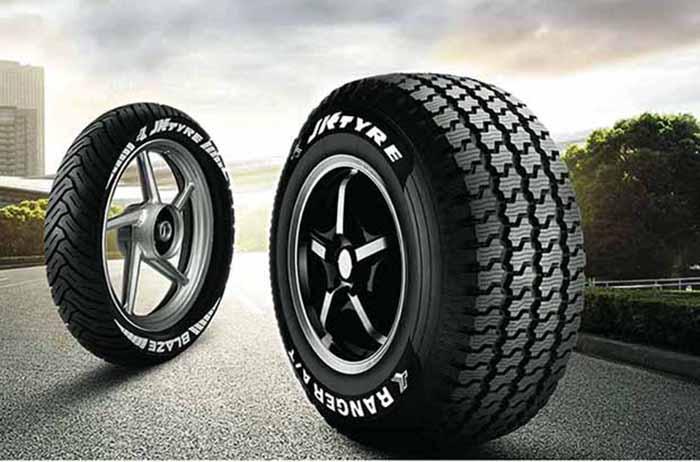 JK Tyre & Industries Limited is one of the leading tyre manufacturers in India and also amongst the top 25 manufacturers in the world with a wide range of products who aim to disparate the business segments in the automobile industry. JK Tyre is the only tyre manufacturer in India to be included in the list of Superbrand in 2017, the sixth time the honour has been granted to the company. JK Tyres offers tyres for the entire range of passenger and commercial vehicles, starting from a 3 kg two-wheeler tyre to a 3.5 tonne OTR tyre.

The power pillar who is regarded as the architect of the JK Foundation is Lala Juggilal Singhania and later was carried forward by Lala Kamlapat Singhania. The company was converted into a public limited company on 1st April 1974. The manufacturing project was promoted by Straw Products Ltd and J.K. Synthetics Ltd. In 2007, JK Industries Limited changed its name from “JK Industries Ltd” to “JK Tyre & Industries Limited.

The company has a global network in 100 countries across six continents, with production support from twelve plants nine in India and three in Mexico. Currently, the capacity across all its plants is about 35 million tyres per annum. In April 2016, JK Tyre acquired Cavendish India Limited from Birla Tyres. JK Tyre & Industries Limited has a widespread network of 4000 dealers and over 500 dedicated Brand shops called Steel Wheels and Xpress Wheels providing complete solutions to its customers. The company made a recent income of US$ 9.3 billion in 2018 thus creating a huge market.

TVS Srichakra is a part of TVS Group one of the leading automobile groups. The company got incorporated in 1982 as Srichakra Tyres (STL) and was promoted by R Naresh T V Sundram Iyengar & Sons and Sundaram Industries. The company manufactures two-wheeler, three-wheeler, and Off-highway tyres. It also manufactures ultra-light truck, industrial and OTR tyres.

The company has a joint collaboration with DuPont and Cherry. It exports to the US and the European market. In 1995-96 the company expanded its production capacity to 33 lacs per annum. Technology for modernization of certain sections of its plant is imported from Schiesser Rubber Technology Switzerland. Some of the major clients of STL are Hero Honda Bajaj Auto TVS Suzuki etc.

TVS Srichakra tends to be a prominent OEM supplier to not just TVS Motors, but to the most leading brands. The domestic after-market supply of the company is held by a strong network of over 2400 dealers and 34 depots. TVS Srichakra Limited exports to over 70 countries across the world. Through export, we continue expanding our presence in the USA, Europe, South America, Africa and Australia. According to the reports of 2018, the company successfully made a net income of about US$ 2.4 billion. Cavi Electrici e Affini Torino also known as CEAT is one of the leading manufacturing tyre company and has its widespread in the global markets. CEAT home country is Italy and has its headquarters at Worli, Mumbai, India.

CEAT was founded in the year 1924 by Virginio Bruni Tedeschi in Turin, Italy. The company got incorporated in the year 1958 as CEAT tyres in Mumbai. It got collaborated with Tata Groups, initially. It also merged with Deccan Fibre Glass Limited in 1981. Later, in the year 1982, Rama Prasad Goenka Group also known as the RPG group acquired the company. The company’s chairman and the Managing Director are Harsh Goenka and Anant Goenka. CEAT company also has a joint venture with Asia Motorworks and Kelani tyres. The joint venture is named as CEAT Kelani in the year 1999 to manufacture and market them in Sri Lanka.

CEAT provides a wide range of tyres for various types of vehicles like passenger cars, light commercial vehicles, motorcycles and scooters, cycles, SUV and many more. It exports these products across countries like America, Australia, Africa and Asia.

The company has a revenue of US $890 million for the financial year 2017-2018 with a net income of US $39 million in the same financial year. CEAT tyres also sponsor bats to cricketers like Rohit Sharma, Mayank Agarwal and many more. Learn what is Tyre Retreading

Michelin was founded in the year 1889 by two brothers named Edouard Michelin and Andre Michelin who started with a rubber factory in France. The company got his recognition on 28th May 1889. Later in the 1920s and 1930s, many rubber factories were planted by both the brothers in Vietnam. They made many innovations which include the radial tyre, the removable tyre, and the pneurail tyre.

The products offered by the company are car tyres, train tyres, road bicycle tyres, radial tyres and many more. It has been supplying tyres to the Audi, Ford, Toyota, Volkswagen factory teams. The company has also manufactured Formula one tyres. Along with the products the company also offers travel assistance services. 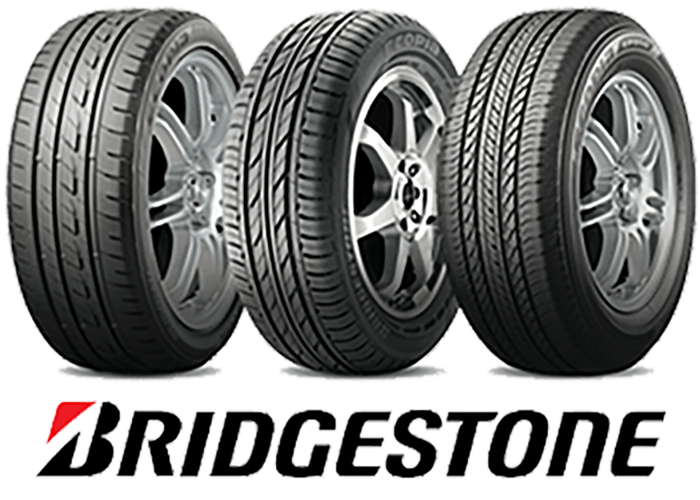 Bridgestone is the world’s leading manufacturing tyre company. It stands in the first position globally followed by Michelin. It is a Japan-based multinational auto and truck parts manufacturing company. “Ishibashi” is the word from which the company name has been derived which means “stone bridge” in Japanese.

The products that the company offers are Motor vehicles tyres, Formula one tyres, sports cars and touring cars tyres and many more. Earlier the company restricted itself to tyres but now it has diversified its products. It also produces automotive components, industrial products, construction materials and more.

The performance of the company in the market includes revenue of 3.34 lakhs crores JPY and net income of 26555 crores JPY.

Which is the best selling tyre brand in India?