With a U-turn, you turn your car around in the middle of the road and move in the opposite direction in one smooth motion.

Most places and most states in the U.S. let you make a U-turn, but some cities and towns may have laws against it.

A U-turn is the easiest way to turn around on the road, but it’s important to do it well and safely. 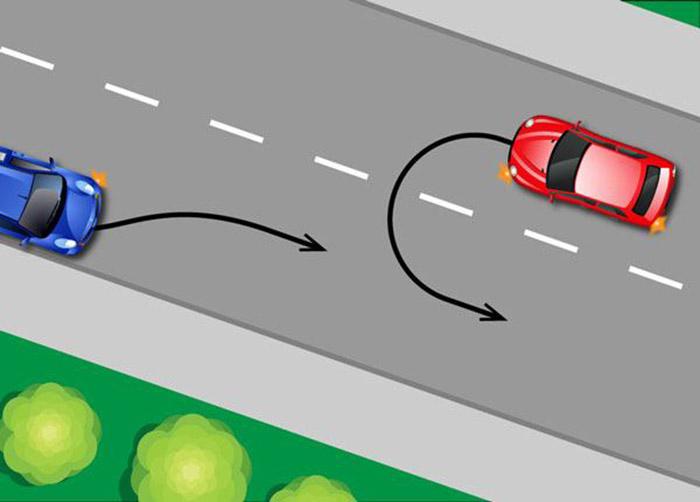 You can do a U-turn while moving or after coming to a stop.

Many U-turns start at traffic lights and go around the middle of the road.

You can only make a real U-turn on a road that is wide enough to turn around 180° without stopping.

If you have to stop to finish the turn, it becomes a three-point turn.

To make a U-turn:

Check the road in front of you, on both sides, and any streets or driveways that lead to the road you are turning around on to make sure they are clear.

Press the gas pedal to move forward, and turn the steering wheel all the way to the left to make a tight turn.

Check all entrances to the road all the time to make sure that no one is pulling out of a street or drive.

If you are making a U-turn on a road with more than one lane, move as quickly as possible into a single lane. Most people do this because most two-lane roads don’t have enough room to make a U-turn. 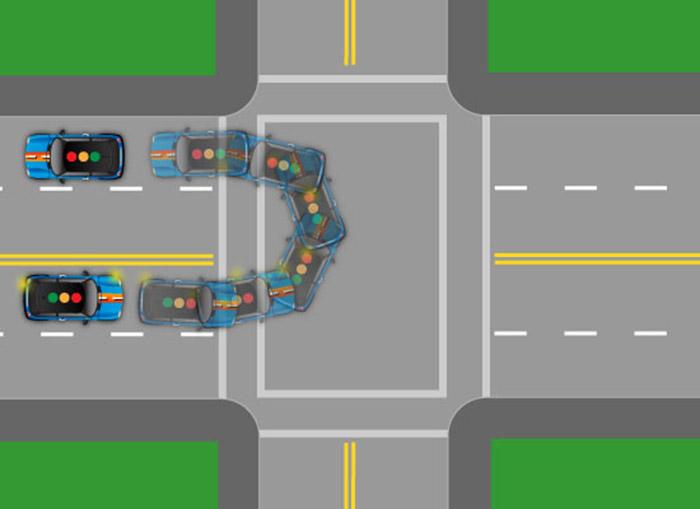 A broken U-turn happens when a driver can’t keep a tight enough turn (or when the road isn’t wide enough) to make the turn in one smooth motion.

In this case, the driver must go backwards to get around whatever is in the way, and then go forwards to finish the turn.

A U-turn that breaks is called a 3-point turn.

No state makes it clear that a driver must be able to do a U-turn to pass the test. (Most turns are three-point turns.)

U-turns, on the other hand, are legal in most U.S. states, and your driving instructor can ask you to do one.

Before taking a driving test, you should know how to do both a U-turn and a three-point turn, which can be used to save a U-turn if you don’t make it all at once.

Signs for U-turns can be put up in places where they are allowed to help and warn drivers.

On a highway with two lanes, a U-turn sign may be put up to show that there is a crossover coming up that can be used to turn around.

At a stoplight on a road with more than one lane to turn left, a U-Turn sign may be put up to show which lane can be used to make a U-turn. (It’s almost always only the inside lane, which is the one on the left.)

Even though there isn’t a sign for U-turns at an intersection, that doesn’t mean it’s not allowed.

Most states that let you make a U-turn let you do it at any intersection unless it says otherwise. (It still only works for the inside turn lane, though.)

No U Turn Signs

Again, the signs that say “No U-turn” look different depending on where they are placed.

On a divided highway, like an interstate in the United States, No U-turn signs usually look like this:

No U-turn signs usually look like this on roads with more than one lane for turning left:

Even in states where U-turns are allowed most of the time, they are usually not allowed at intersections with poor visibility, high speed limits, or where it is too dangerous to make one.

U-Turn Rules and Laws by State

The U-turn laws in the United States are pretty easy to understand because they are the same in 49 of the 50 states.

Simply put, you can make a U-turn anywhere it is safe to do so and doesn’t slow down traffic (as long as there is no sign posted stating a U-turn is forbidden).

These rules for making a U-turn are:

Even when there are two yellow lines, you can make a U-turn (if you have sufficient visibility).

A U-turn across a triple yellow line is against the law. (Roads with three yellow lines are very dangerous because there are too many turns and hills to see.)

Most intersections allow you to make a U-turn (unless otherwise posted).

Even if the road is clear, it is against the law to make a U-turn when the light is red.

On divided highways with cross-over lanes, it is legal to make a U-turn.

It is against the law to make a U-turn on a road with no crossing points or to cut across the middle of a divided road.

Only two-way streets let you make a U-turn.

You can make a U-turn in a residential area as long as you have enough space to do so without stopping traffic. (This distance is set at 200 feet in many states.)

In business districts, you can legally make a U-turn at stoplights and crosswalks.

The following states have laws about U-turns:

The state of New Hampshire

The state of New Mexico

The state of North Carolina

The state of North Dakota

The state of South Carolina

The state of South Dakota

Some states also have lanes just for making U-turns.

Georgia and Texas both have protected U-turn lanes, which are usually found on access roads next to interstates and let drivers make U-turns outside of the normal flow of traffic.

What States are U-Turns Illegal?

Oregon is the only state in the U.S. where U-turn laws are very different from the rest of the country.

Are U-Turns Legal in Oregon?

In Oregon, making a U-turn is not totally against the law, but there are a lot more rules about it.

The rest of Oregon’s U-turn laws are mostly the same as those in other states, with a few small differences.

If you can see well enough, you can make a U-turn at an intersection that doesn’t have a traffic light.

In cities, the state says that people can see well from 500 feet away.

When making a U-turn, you never have the right-of-way.

It doesn’t matter if you have a green light or can make a U-turn at the intersection.

This is the most difficult part of making a U-turn.

You are in charge of making sure the road is clear and that you can safely make a U-turn.

If you want to make a U-turn while someone is waiting at a nearby light or stop sign to turn right, the person turning right on red (yes, even on red) has the right of way.

If you want to make a U-turn while someone is waiting to pull out of a business, the person pulling out of the business has the right of way.

A driver who makes a U-turn has more responsibility because it is an unexpected move on the road that is hard for other drivers to predict.

A driver making a U-turn does have the right of way in two situations.

One, if the driver making the U-turn starts it before the driver turning right on red gets to the intersection.

In this case, the intersection is not clear, and a driver who turns right on red should only do so if the road is clear. If they did so here, they would be breaking the law.

Two, if there is a sign that says drivers who turn right on a red light must give way to people making U-turns. These are how the signs look –

If you don’t, you are the responsible driver when you make a U-turn.

People think that making a U-turn is one of the most dangerous things you can do while driving, especially in cities with a lot of traffic.

It’s basically a type of left turn, and left turns cause a disproportionate number of traffic accidents.

The National Highway Traffic Safety Administration says that 40% of all car accidents happen at intersections. Left turns are the most common cause of intersection accidents, causing 22.2% of all accidents.

In cities and other places with a lot of traffic, U-turns aren’t usually the best thing to do, and you should try to avoid them if you can.