Mercedes-Benz, a German automaker, showed off the 2017 E-class at the 2017 Detroit Auto Show. The company has now revealed the E63 AMG super saloon, which is based on the E-Class. The 2017 E63 AMG will be shown for the first time at the Los Angeles Motor Show, which will take place in the middle of November this year.

Almost nothing has changed about the sedan’s shape. But some muscle-like lines are added to make it look bigger. Because the car’s track is now wider, the wheel arches now stick out further. The radiator grille has also been changed so that it sits a little lower. 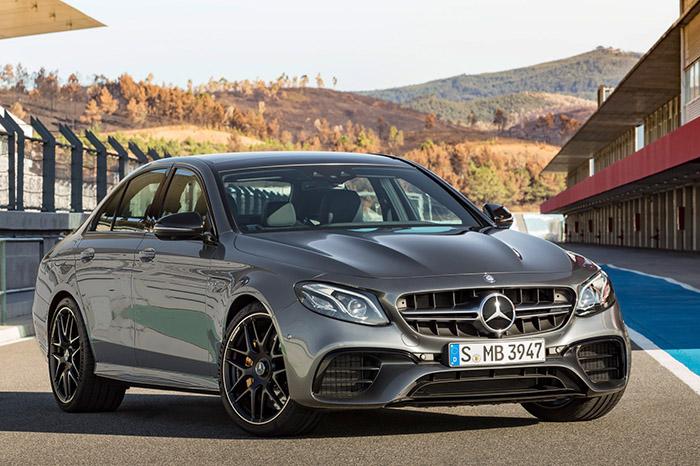 The 19-inch 10-spoke alloy wheels and the words “V8 Biturbo 4Matic +” on the front fender set the E63 AMG apart from the regular E-Class. When you move to the back, everything looks the same.

The E63 is powered by a slightly tweaked 4.0-liter V8 Biturbo engine that makes 570PS of max power and a huge 750Nm of max torque. This powerhouse has two turbos between the banks of cylinders to reduce turbo lag. If a hoonigan wants more power, they can get the “S” version, which has 612PS of power and 850Nm of peak torque. Both the standard E63 and the E63 S use the “AMG SPEEDSHIFT MCT,” which is an automatic transmission with nine speeds. The E63 now has an all-wheel-drive drivetrain to handle the extra power and improve its performance on the track. But there is a mode called “Drift Mode” for when you just want to have fun. In Drift Mode, only the back wheels get power.

The German Super Saloon now has a more luxurious feel on the inside. The instrument panel and beltlines are made of Nappa leather, and the steering wheel has a crystal grey band in the middle and some contrasting stitching. The new Mercedes-Benz E63 will go on sale in international markets early in the year after next. This latest AMG is likely to come to India in the second half of 2017.

How To Check Freon Levels In Car
7 Bad Fuel Pump Symptoms
Using WD40 As Engine Oil: A Simple Way To Extend the Life of Your Car's Motor
How To Unlock Steering Wheel That You Should Know