Why is window tint so popular, and can you get pulled over for it in Utah?

In states where summers are hot and dry, many drivers like tinted windows because they keep the car cool and stop the sun from shining in.

But it’s important to follow the rules and laws of the state so you don’t get pulled over and have to pay a fine.

Let’s look at the window tinting laws in Utah and some other frequently asked questions about this topic.

Visible Light Transmission, or VLT, is the most important way to measure how dark your windows are.

This is how much sunlight comes in through your windows and is given as a percentage.

The windows get darker as the number goes down.

In 2005, Utah passed laws about window tint to make sure that drivers don’t make their cars so dark that they can’t see the road.

Some windows aren’t limited by VLT, but others are, so before you buy anything, you should talk to your dealer or the film’s maker.

They can tell you if their film meets the rules in your area and what kind of VLT is needed for which windows.

No matter what kind of car you drive in this state, you have to follow the same rules.

This is helpful because you won’t have to worry about whether you have a sedan, SUV, or truck, so it will be easier for you to follow the rules.

For these panes, you must buy a film that lets at least 43% of visible light through.

Your back passenger windows and back window aren’t limited in any way, so you can put any kind of darkness on them.

The same goes for your windshield above the AS-1 line or the top four inches.

Further Regulations and Laws in Utah

Besides the VLT, there are some other rules you need to think about.

Most importantly, you should avoid window tint that looks metallic or mirrored because it could blind other drivers and cause accidents on the road.

Also, keep in mind that if any of the windows behind the driver are tinted, you’ll need two side mirrors.

Utah doesn’t have any rules about the colour of your tint, so you can choose whatever you want.

You don’t have to buy certified film or stickers that say “VLT” either.

Still, if you get pulled over for this reason, it might be a good idea to have proof of how dark your front passenger windows are. 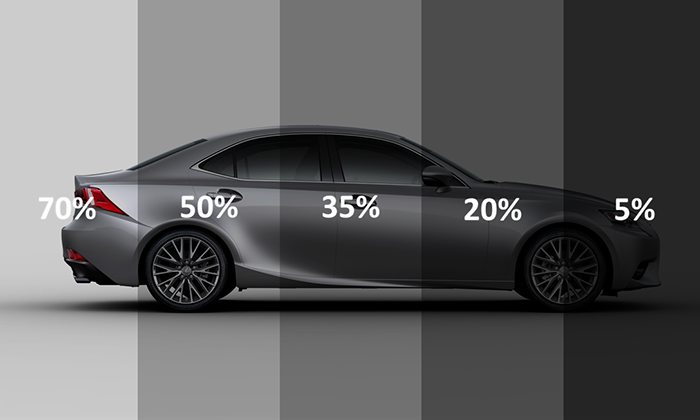 Most people tint their windows because it’s easier and saves money on air conditioning, but for some people, it’s a medical need.

UV rays can hurt you, for example, if you have Albinism or another condition that makes your skin very fair.

If you are sensitive to sunlight, tinting is a safety measure you need to take, not just a style choice.

Unfortunately, Utah law doesn’t let people get out of rules for medical reasons, so you will still have to follow the rules.

People with serious health problems should talk to their doctor about other ways to stay safe in the sun while driving.

Now that you know the local laws about window tinting, you may be wondering if you should get your car’s windows tinted and, if so, what shade is best.

Most people choose tint between 20 and 50 percent, but if you want to keep your privacy, you might want to choose a lower VLT.

In any case, it’s important to follow the rules in Utah to keep from getting into trouble.

Why Is Window Tint so Popular in Utah?

There are a lot of reasons why a driver might choose tint, especially in states like Utah where summer temperatures can reach 100F.

Darker windows not only keep your car cool and shield you from glare, but they can also help protect your skin from sun damage.

Even if you don’t have a health problem, you can still get sunburned if you drive for a long time.

They look good on both brand-new cars and old ones that need some work.

Also, not being able to see inside your car could keep thieves or nosy neighbours away, so they are a great choice for drivers who want to keep their privacy.

Can You Get Pulled Over for Tint in Utah?

Tint is currently a primary offence in Utah, so you can get pulled over for it.

The VLT can be measured very accurately by police officers, and they can also tell if your tint is metallic or reflective.

If you don’t follow the rule, you could get a $50 fine, so it’s best to stay out of trouble.

Tint is popular in Utah, so many people choose to darken the windows of their cars.

The state’s laws are clear and easy to follow, so you shouldn’t have any trouble following Utah window tint laws and avoiding a fine.