We think something smells like vinegar whenever we smell something acidic. Most of the time, though, it’s not vinegar at all.

Vinegar is one of the acids we come across most often in our daily lives. Because of this, we tend to think of a smell when we think of something acidic.

If your car smells like vinegar, it’s likely because of something acidic. But that smell could be caused by a lot of things. Getting rid of something will be easier if you know what caused it. 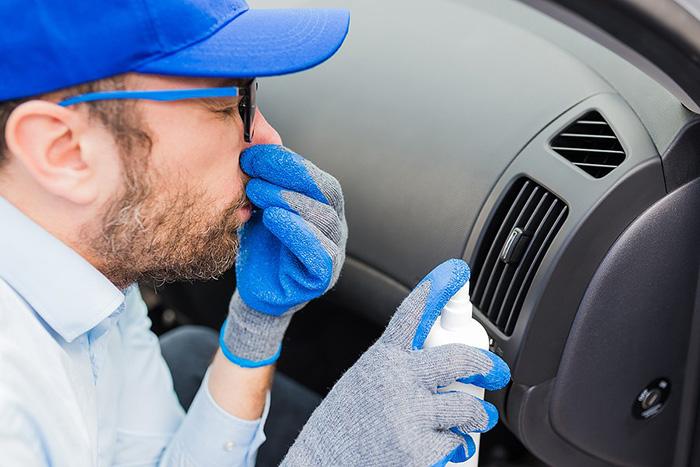 The inside of a car shouldn’t smell like vinegar. But a lot of people sweat, and you can smell it in theirs.

Here are a few things that could be making that smell.

How often do you like to go to the gym? If that’s the case, you might have left some old clothes in the car. When you do this, they will start to smell very bad. You may not smell them right away, but they’ll start smelling stronger over time.

Old, sweaty clothes tend to smell a lot like vinegar, too. We’d suggest looking in the trunk to see if there are any clothes back there. If so, you’ve probably found your culprit.

When food starts to go bad, it can also smell a lot like vinegar. Because bacteria and fungi start growing on it. These give off a smell like vinegar because they have a lot of acidic compounds.

Check under your floorboards to see if any old food is hiding there. Also, don’t forget to look under your seats. There’s a good chance that you’ll find what you need there.

3. You Left the Windows Down While it Was Raining

Has it recently rained where you live? If so, you might not have known you left the windows open during the storm. If that happens, you’ll have a lot of water in your car.

When you let water soak into your seats, it makes a good place for mould to grow. Most moulds also smell a little bit like acid. So, it might start to smell like someone spilled vinegar in your car.

4. You Spilled Water on the Floor

Even if you just spilled a little bit of water on the floor of your car, that smell could happen. Most of the time, a small amount of water won’t do much. But if you spill an entire bottle, mould may start to grow.

Molds and mildews usually smell very strong. At first, you might not see it. But once they’ve grown for a while, you’ll notice the smell every time you go in. Even cars don’t get much fresh air inside. So, over time, the smells tend to get stronger.

5. There’s a Lot of Condensation in the Car

Water could also be getting into your car because it’s getting cold outside. Even if you’re not running the air conditioner, condensation can be a problem. If it’s been cold lately, condensation could form inside your car.

Then, as more water drops form, everything gets wet. If you don’t get the water out of your car, things could start to grow inside. Most of the time, you’ll be able to smell their waste.

6. Mold Is Growing in the Air Conditioning Unit

Molds and mildews are two common things that make things smell like vinegar. Let’s say you’ve looked all over the inside of your car. But you’ve never seen a mould or something that looks like one. Even so, that doesn’t mean there aren’t any in there.

Even inside your air conditioner, moulds could start to grow. They can grow almost anywhere that has a lot of water. Open the hood and look at the lines for the air conditioner. If there’s mould in the room, that’s what’s making it smell.

7. You’ve Got a Leaky Battery

We’ve already said that a car that smells like vinegar usually has something acidic in it. The battery in your car is one of the most acidic things in it. These can sometimes start to leak. And battery acid is not too stable.

Since it is acidic and flammable, you will quickly smell battery acidic. Even if you don’t have a lot, you can still smell it. Look at the battery in your car to see if it’s leaking anything. If that’s the case, you’ll need to get a new one.

If you smell gas, you might have a gas leak. But sometimes, vehicles’ fuel lines can get holes. Even a small hole can let out more gas than you might think. And the smell of gas is very strong.

Air filters are a key part of the air conditioning system in any car. They will get old over time, and they may start to smell. Then, whenever the vents blow, you’ll smell the scent.

Most of the time, you can tell if something is wrong by looking at the air filter. If an air filter is clean, it won’t look like anything is on it. But if it doesn’t look clean, you might want to get a new one. Close up and smell the air filter. If it smells strong, you’ve probably found the source of the problem.

10. You Left Groceries in the Trunk

Lastly, you might have forgotten groceries in the car’s trunk. Both spoiled milk and rotting meat smell very strongly of acid. They will quickly get through the trunk and into the car’s cabin.

Open your car’s trunk to see if the smell gets stronger. If that’s the case, whatever is making it happen should be in there. Look around, led by your nose, to see if you can find the source. The smell should be stronger the closer you are to it.

Ways to Get Vinegar Smell Out 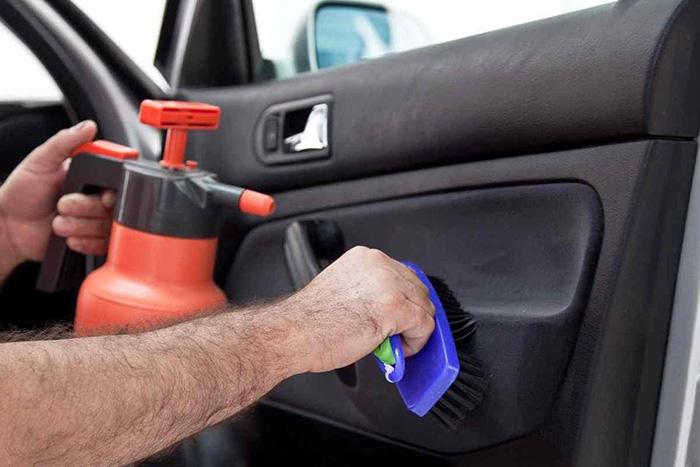 Most of the time, it’s not too hard to get rid of a smell like vinegar. First, you have to figure out where it came from. After that, it should be easy to clean up.

Use our list to try to figure out what’s making the smell. When you find it, throw it away. If it’s mould or mildew, kill it with something.

If they are old clothes, get rid of them. Or, if the food is old, throw it away!

We suggest you start by getting a box of baking soda. Then, sprinkle some of it all over the inside of the car. Make sure that some of it gets on the seats and the floor. Put some baking soda in the car’s trunk after you’ve done that.

You could leave a few boxes of baking soda in the car to really get rid of the smell. You can open them up and put them in different places. Most of the time, you can put one in the front and one in the back. Don’t forget to put one of them in the trunk as well.

Baking soda is great for getting rid of smells. However, it doesn’t happen overnight. After a few hours, the smell should start to fade. But it might take up to a week to go away completely.

In the meantime, you could use air fresheners to help. It’s not fun to drive around in a car that smells like vinegar. But you could cover up the smell while you’re driving with a few air fresheners. Also, when you go somewhere, roll down the windows.

Getting some fresh air can also help get rid of the smell. It could help a lot to take a long drive with the windows down.

If you are really stuck, you could even try using bleach to clean the car. But, be careful. A dangerous gas can be made when bleach evaporates. You might be better off getting a pro to help you with this.

Your best bet might be to take your car to a detailer.

They have a lot of experience getting bad smells out of cars. So, they will know what to do if yours smells like vinegar.

Is the Vinegar Smell Dangerous?

If you smell vinegar in your car, you might wonder if it’s bad for you. Luckily, the smell of vinegar usually doesn’t hurt your health. Most of the time, they just get in the way.

But if the smell is of gas or battery acid, it could be dangerous. You must find out where it came from to make sure it’s safe.

Getting Rid of Your Car’s Vinegar Smell for Good

Getting rid of the smell of vinegar is not as hard as you might think. First, you have to find out what’s making it happen. Then, once you know who did it, you can come up with a plan.

Most of the time, all you need to do is put a little baking soda in the car. But there are times when you might want to hire a cleaning service.

What Is The Thickest Motor Oil?
Long Bed Camper On Short Bed Truck
Fixing Or Replacing A Headliner
How To Reset Check Engine Light