Volvo missed a chance when it released the S90 without semi-autonomous driving technology based on radar. Only the Volvo XC90 in T8 Excellence trim comes with this feature in India.

There are already some good options in the mid-size luxury sedans space. The S90 just doesn’t have anything that will change the world. There’s nothing about the S90 that would make even people who buy C-Class and S-Class cars think about it.

Definitely, it’s big and long. Yes, that concave grille is the only one like it. I know that the ratio of the steering to the axle is the longest. With the longest wheelbase, the S90 is, of course, close to being a limousine. Bowers & Wilkins makes the best music system in its class. It’s their best sedan, so they’re going to put everything they have into it.

But it doesn’t have one thing that would have made it the coolest car on the street in India. And that is semi-autonomous driving technology based on radar. It’s not just for hippies who are crazy about tech. It’s also for people who want the safest sedan on the market at the moment. 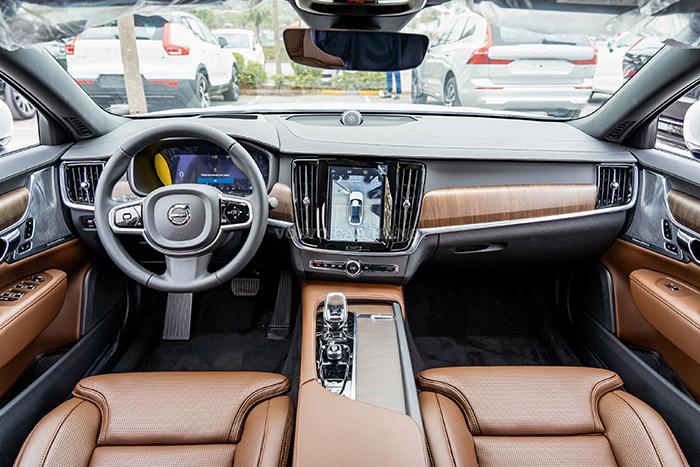 Not offering Radar Safety Kit in the S90 is a missed opportunity for Volvo.

Recently, the government took away licences for some frequencies. These have been used by car companies to do three things:

With Lane Keep Assist and the above two features, semi-autonomous driving is possible.

Volvo cars, in particular, already come with the City Safety package. This technology uses lasers to find obstacles, and if the driver doesn’t hit the brakes in time, the car will still stop on its own. The only bad thing is that it only works at slower speeds, like those in cities.

With the XC90, the Swedish are the first in India to take advantage of the de-licensing.

Internationally, both the Inscription and Momentum versions of the S90 have the same technology. At least as a possible choice. The car is a direct import, so it already has all the radar equipment. They only need to turn it on.

So, what all are we missing out on?

Adaptive cruise control: Just drive at a steady speed on the highway, and the car will keep up with you. If it sees that the car in front of it is going slower, it will automatically slow down and return to its set speed when the road is clear.

Collision warning with fully automatic braking: The car will warn the driver if it is about to hit something. If the driver doesn’t respond quickly enough, it will put on the brakes on its own to stop the crash.

Detects people on foot, people on bikes, and animals. Even people hiding in the bushes can’t hide from its eyes. It will always stop if someone gets in the way. This is the most helpful feature, especially in India, where stray animals, pedestrians, and motorcyclists always find a way to surprise us.

If you start to drift out of your lane, the steering wheel will vibrate gently to let you know.

Automatic lane correction and lane keep assist: If you don’t pay attention to those vibrations, it can help you get back on track. If there isn’t enough room to go back, it won’t make any changes.

Blind-spot detection with cross-traffic alert: This system constantly checks the areas you can’t see from the driver’s seat.

If it thinks there might be a crash, it will show you warnings in your mirrors. If a crash is about to happen, the car will try to avoid it by applying the brakes.

Rear collision warning: The system literally keeps an eye on your back to make sure you don’t hit anything. If another car is coming too fast and a crash is likely, the car will turn on the seatbelt pre-tensioner to prepare the people inside.

Driving that is only partly controlled by the driver is the way of the future. This Volvo could have shown us what the future will be like, but it didn’t.

So, the S90 doesn’t have much of what makes a Volvo a Volvo.

How do you define luxury?

The owners can never get their time back, no matter how much leather, wood, glass, or steel they have. In the future, a car’s luxury will depend on how much time it saves you by taking you places. It might have shown us what luxury will feel like in the future. The S90 doesn’t set new trends like it could have.

Volvo may have turned off these features to keep the XC90 T8 as unique as possible and to avoid feature duplication. We expect the most expensive version of the S90, called Excellence, to come out later in 2017. Maybe that will get everyone to cheer and clap.