In recent years, Volvo has completely changed its image by making a bunch of cars that look great. Now, a V60 estate has been added to this list. It was shown off at Volvo’s headquarters in Stockholm, Sweden. Volvo describes the V60 as a mix of good looks and usefulness. Volvo has been around for generations, so it’s important that many of its customers are families. The V60 stays true to this tradition while giving the estate class a new level of excitement.

The Volvo V60 was made to look like its older brother, the Volvo V90. Since the Geneva Motor Show is coming up next month, we expect to see V60 there as well. India doesn’t have a lot of good SUVs, so the V90 and V60 should fit in well if and when they come to India. (The Volvo XC60 went on sale for Rs 55.90 lakh)

The Volvo V60 has LED headlights in the shape of Thor’s hammer, a new alloy design, and a hunkered-down look. The back of the car reminds me a lot of the V90 estate, but the four exhaust tips remind me of the XC60. When writing about Volvo, you have to talk about safety. Driver support systems, autobrake technology, a pilot assist system that helps the driver with steering, throttle, and braking on well-marked roads, run-off mitigation, oncoming lane mitigation, and multiple airbags are all standard safety features. 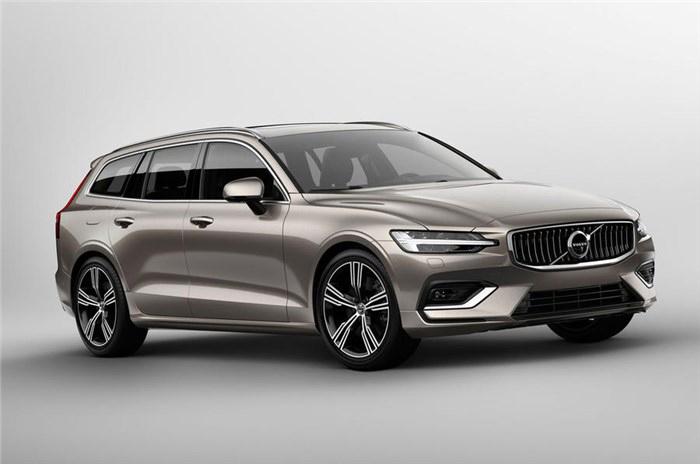 V60 has a Swedish Bauhaus design and a lot of comfort features like climate control, a panoramic sunroof, and a Sensus infotainment system with 4G connectivity, Android Auto, and Apple CarPlay.

The XC60, S90, and V90 all use the same SPA (Scalable Product Architecture) platform as the V60. If this car is built on this platform, it will automatically be big and full of technology. Volvo’s new premium subscription service, Care, will also include the V60. This is a new way to serve customers, where they don’t have to buy cars but just pay a monthly fee to use them.

The 2018 Geneva Motor Show will be shown.

Volvo will show the world for the first time the all-new V60 2019 at the Geneva Motor Show. This event was not chosen for no reason. Switzerland is a good place to see how the high-end car market looks not just in Europe but all over the world. So, the brand chose the Geneva Motor Show to make a big splash. The Audi A4 Allroad, the BMW 3 Series Touring, and the Mercedes-Benz C300 waggon will all be rivals for the 2019 Volvo V60 waggon. At the moment, this station waggon doesn’t have a direct competitor in India.

Most of the Volvo V60’s design comes from the V90 Estate and the XC90 SUV. The car also has new features and engines that it didn’t have before.

The old Volvo V60 was smaller and less safe than this one. The new V60 has a lot of new features that make it feel more luxurious. This Volvo V60 had been a good worker for eight years, but it was time to get a new one. It’s 12 cm longer and 2 cm wider than it used to be. The car has more room inside for both front and back seat passengers. The space in the trunk goes from 430 litres to 529 litres.

The new Volvo V60 is built on the same Scalable Platform Architecture (SPA) as the XC60 and V90. This will make it possible for diesel, gasoline, and hybrid engines to be used in this station waggon.