The presence of water in the engine oil poses a severe threat to the internal combustion engine. Additionally, this issue might occur independent of the vehicle’s mileage or model.

It’s evident that in this scenario, finding out why water gets into the engine crankcase and mixes with the oil is just as crucial as diagnosing the problem quickly.

What is the danger of water in engine oil? 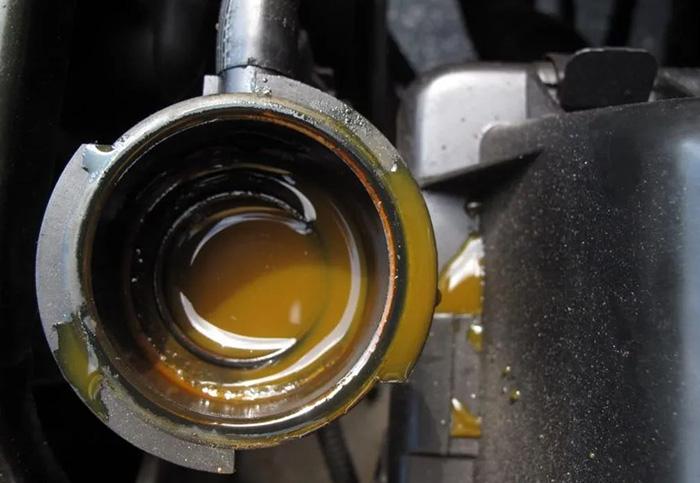 In addition to corrosion, water in the engine’s oil affects the oil’s makeup. The oil film’s protective characteristics are no longer effective. The engine will suffer as a result. Because of the white emulsion formed by the mixture, the piston rings get stuck and become clogged with gunk. The scuffs on the rubbing pairs and the cylinder walls are the first to take a beating as a result.

All that is left of this emulsion are the voids. Additionally, the density of the oil will rise, reducing its fluidity. Eventually, this will necessitate engine repair, particularly for parts requiring lubrication under pressure, such as the crankshaft, camshaft, and piston pins.

Because symptoms don’t occur, the driver may not be aware that a small amount of moisture has entered the motor. The connecting rod deforms in this instance, yet it is still functional. It’s possible for an engine to suddenly shut down and fail to restart after a specific number of miles.

Even though this is an uncommon occurrence, you should not rule it out. 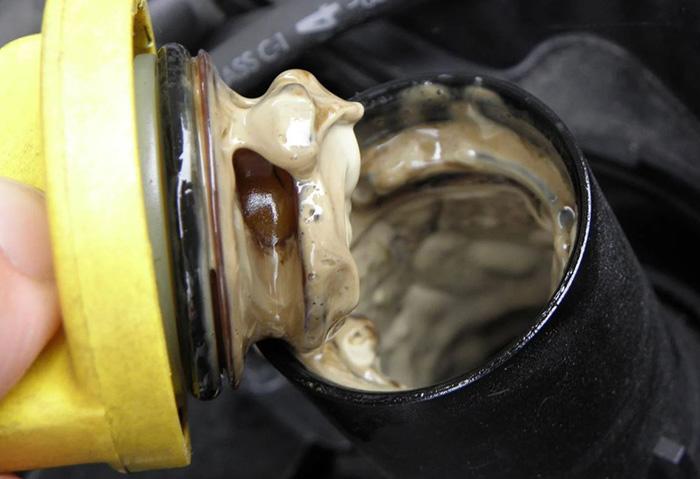 1. Damage in the oil’s crankcase

The parts inside the motor are well insulated from external forces, yet water can seep into the engine crankcase and the lubrication system, causing damage to the components.

If you drive on a snowy road, the engine crankcase will rot because of the ice and snow on the road. Using salt to melt snow and ice on that route will speed things up because salt corrodes materials much more quickly.

Despite the fact that the circumstance I’ve described above will eventually have an impact, it’s important to keep this in mind. Having an engine splash shield attached under the car is a good idea because of this. Installing a high-quality cover is highly recommended if you don’t already have one.

Overheating can cause the cylinder head surface to deform, making this problem more common in older vehicles. Incorrect installation, such as after a repair, and poor gasket quality are also factors to consider.

It is a common practice for many drivers to buy low-quality oil for the engine in an effort to save money. Due to incorrect storage, these oils not only fail to meet the standards, but they also contain a small amount of moisture. Moisture particles are absent from pricey, high-quality oil.

When the engine is under heavy load, metal particles can be found in its oil. This can cause problems with the pistons striking the cylinder head, as well as with the oil itself being contaminated by metal particles.

5. Cracks in the cooling system

Overheating, cylinder flaws, incorrect coolant use, and high detonation loads are all possible causes of this issue. External mechanical damage may also be to blame.

6. Driving through a deep puddle

It’s dangerous to drive through a large puddle on the road, especially if the driver is irresponsible and does so quickly.

Symptoms of water in engine oil

If you suspect that your engine is flooded, look for the following signs:

How to get rid of the water in the engine?

As soon as you observe any of the following signs, you should seek immediate medical attention. Fortunately, there are workarounds for this problem.

Both the oil and the coolant must be replaced if they’ve become discolored or inconsistent in consistency. Water cannot be removed from the engine any other way. Don’t, however, haste to add quality drinks. The engine and the cooling system must be completely flushed.

Some flushing fluids are more specialized than others. However, this engine overhaul operation is a little tricky and should be done by a professional. After flushing, all of the moisture will be eliminated.

If your automobile abruptly stalls after driving in a deep puddle, don’t try to start it again. There is a possibility that one of the cylinders contains water. This situation necessitates opening the hood and inspecting the moist areas. Drying the ignition system is essential.

Spark plugs and coils must be taken out of the engine and allowed to dry off. The air filter and the connector should be checked and dried. Compressed air can be used to clean up the connections between the spark plugs.

Towing the vehicle to a repair shop is the best option because most drivers lack the essential tools and knowledge.

Do not be alarmed if you notice water in the engine. It’s critical not to start the engine and to properly dry up the moisture if there is any doubt. Damage to the engine can be prevented by cleaning the engine and cooling system. Avoiding water impediments, inspecting the state of the oil, and keeping an eye on the crankcase are all vital precautions to avoid a problem at all.

How To Fix Rod Knock
What Is The Darkest Tint You Can Legally Get In MA?
Symptoms Of Engine Damage From Overheating
How Much Does Straight Pipe Cost