Do you sometimes use water instead of antifreeze in the coolant tank? Well, you’re not alone. A surprising number of people seem to think that if you live in a hot place, you can use pure distilled water instead of coolant. Why use anti-freeze if you never drive your car when the temperature is below 32°F? Right? WRONG!

You might think that water is a cheaper way to cool down that works just as well, but this is a common mistake that could literally blow up in your face. In order for your car’s cooling system to work, it needs coolant. Find out why by reading on. 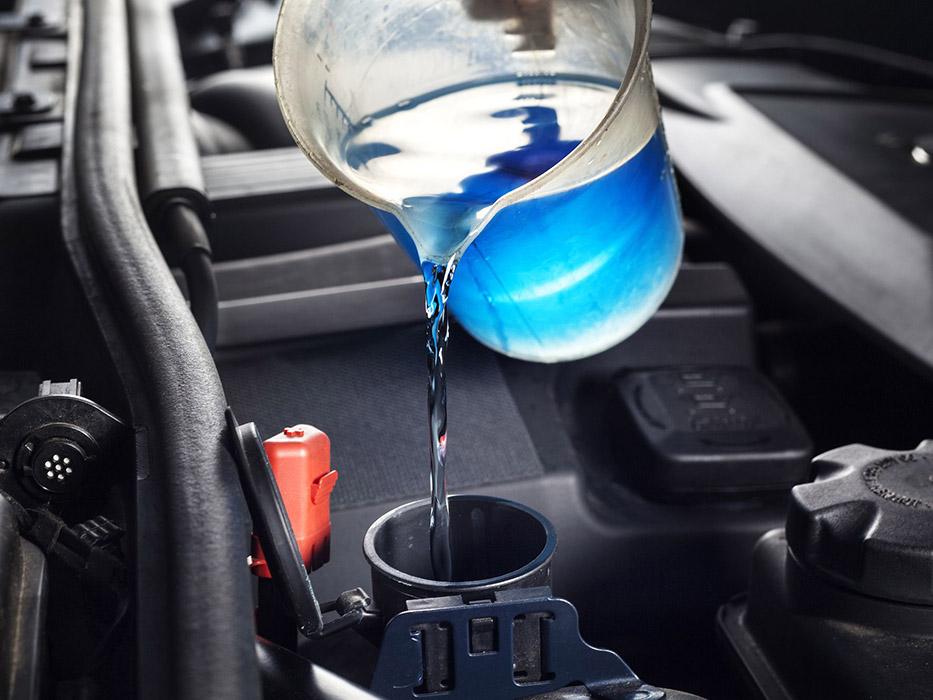 Antifreeze is made mostly of ethylene glycol (EG) or propylene glycol (PG). Because of these active ingredients, the water and coolant mix can stay liquid at such high temperatures. A number of additives and inhibitors are also put in to keep the engine parts from rusting.

The coolant also has dyes added to make it a very bright colour. The colours could be blue, green, orange, red, pink, or yellow. The difference in colour helps you figure out which type of antifreeze is best for your car’s cooling system. If you want to change the coolant on your own, you should talk to a dealer or read the owner’s manual.

Tip: If you know the colour of your coolant, you can look at the colour of the fluid on the ground under your car to find a leak. Oil is black, windshield washer fluid is blue, coolant is brightly coloured, and brake fluid is usually clear and greasy.

Even small amounts of ethylene glycol-based antifreeze are dangerous for people, pets, and wild animals to eat. Ethylene glycol is a thick liquid that has no smell, no colour, and a sweet taste.

A dog can be killed by two ounces.

A cat can die from just one teaspoon.

Children can get sick from two tablespoons.

When the compound is swallowed, it changes into acid, which builds up in the kidneys and makes calcium oxalate crystals, which are bad for the kidneys. Damage to the kidneys causes acute kidney failure.

Propylene glycol-based coolant is the best choice if you have young children and pets in your home and would rather play it safe. This kind of antifreeze is only dangerous if a lot of it is eaten.

How Does Coolant Work

When you drive, your car’s engine makes a lot of heat, and it needs to be cooled all the time to keep it from getting damaged or, worse, breaking down. The coolant in your car flows through the engine block and cylinder heads. This is how the cooling system works. As the coolant moves through these channels, it picks up heat from the engine.

Tip: If your car is overheating, a broken water pump could be to blame. It could also be hoses that leak or a thermostat that won’t work.

The Importance of Coolant 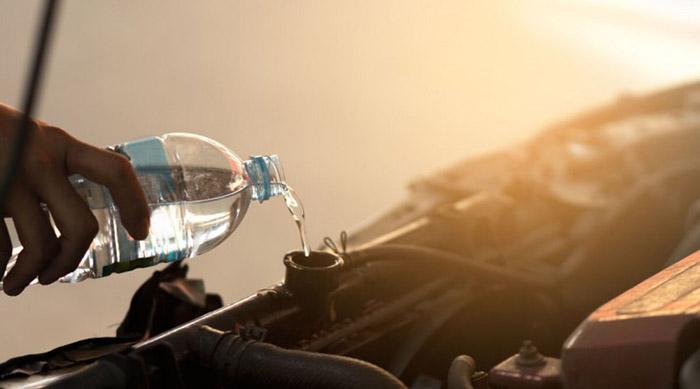 Internal combustion can produce a lot of heat, but it can build up pretty quickly. This can cause the head gasket to blow, the cylinder head to warp, or serious engine damage. If you use water, the high temperatures inside the engine would eventually boil it and make it evaporate, leaving the car without a coolant.

In the same way, if it is very cold outside, there is a chance that the water in the engine will freeze. If the water in your car’s cooling system freezes, it can cause damage like cracks in the radiator or heater core, a warped cylinder head, and a cracked engine block.

So, you should always go with coolant, since it stays liquid even over a wide range of temperatures. The coolant in your car helps keep the engine running well for a long time. As with other car fluids, the coolant in your car should be checked regularly to make sure there is enough and no leaks.

Also, different companies use different kinds of metals in their cooling systems. Based on the materials used to make their gaskets and engine parts, each manufacturer has created a coolant that works best with their system. Teams of researchers come up with a liquid that doesn’t eat away at the metals in their alloys and works best in their pressurised system.

So, you should take the time to find out what kind of coolant your car needs and how it should be used. If you use the wrong engine coolant, the water pump, radiator, radiator hoses, and cylinder gasket can slowly rust and break down.

Note: Even though some coolants say they are good for all cars, it is always best to check with the car’s maker.

Also, when you mix the coolant with water in equal parts, make sure to use pure, distilled water. Minerals in regular water tend to build up in your engine’s radiator and cooling system passages, stopping the flow of coolant.

How to Fill Up the Radiator

Most new cars have a sealed cooling system that doesn’t need to be topped off unless there is a leak. But you should check your car’s coolant level often to make sure there is enough fluid in the radiator.

How to check your radiator fluid

To check your coolant, do these things. You will also need a towel or rag and gloves.

Warning: NEVER open a radiator cap that is too hot to touch. This means that there is a lot of heat inside the radiator. Because of the heat, the pressure will rise. If you take off a radiator cap when it is hot, the pressure inside the radiator will be released. This will cause hot liquid to spray all over you and hurt you. There are a lot of videos on YouTube that show people making this mistake and getting hurt badly because of it.

Make sure the engine gets cool. Put the car in park, turn off the engine, and let it sit until the radiator cools down. Check if the car is cool by putting your hand on the hood.

Open the hood and look for the cap on the coolant tank. Most radiator caps on newer cars are clearly marked. You can also check your owner’s manual to find out where it is.

Take the cap off the radiator. Before you open it, put a towel or thick rag on it because the radiator cap will be under pressure. Do not open it if it is hot because a car’s cooling system is pressurised and pressurised gas can cause severe burns.

How to add more radiator fluid 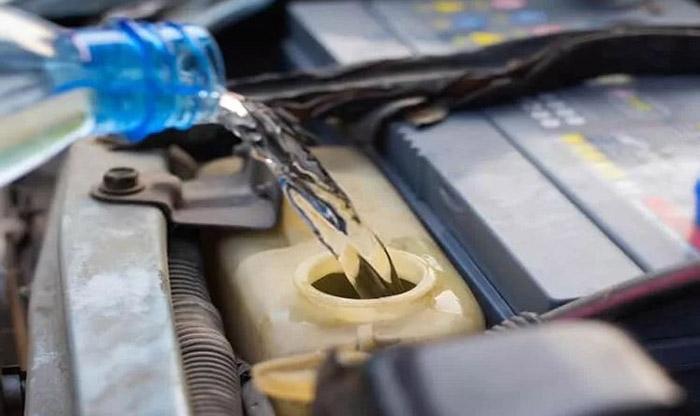 Here’s how to add coolant if you need to. You will also need a funnel, gloves, and coolant. If you buy a pre-mixed coolant, you don’t have to use distilled water.

Note: To find out what kind of coolant your car needs, look in the owner’s manual.

Find the tank for expanding. The expansion/overflow tank is a small reservoir on the side of the radiator that collects any fluid that leaks out when the system overflows. As the coolant gets warmer, it gets bigger. Because of this, you shouldn’t completely fill the overflow tank.

Note: If the level of coolant in the radiator is low but the reservoir is full, it could be a problem with the radiator cap and overflow system. As soon as possible, have a mechanic check the system.

Pour the mixture of coolant and antifreeze into the overflow tank. If your car doesn’t have an overflow tank or if the tank doesn’t drain back into the cooling system, pour the diluted coolant into the radiator, making sure it doesn’t go past the “full” mark. Before you start the engine, make sure the radiator cap is back on.

Start up the car. Listen for any strange sounds and make sure the temperature sensor and engine cooling fan are working well. If you hear clunking or humming sounds, it could mean that the cooling fan is having trouble working, which could also mean that the engine isn’t getting enough air.

Check for leaks. Check the radiator hoses for holes, which may be easier to spot now that the cooling system has new coolant. If you keep adding fluid but still lose coolant quickly, there may be a leak inside the car. Then you should take the car to a certified mechanic for a full checkup.

How to Safely Dispose of Coolant

As was already said, the main ingredients of coolant/antifreeze, ethylene glycol and propylene glycol, can be harmful to both people and animals. Because of this, many states have made it clear how to get rid of old or used gas and antifreeze. To be on the safe side, remember these rules:

Do not dump your waste antifreeze down the drain

Animals may still be able to get to the place where the fluid flows through a storm sewer and drink it because it smells and tastes sweet. Also, you shouldn’t put the coolant in a septic system.

Do not pour antifreeze on the ground

If you dump antifreeze on the ground, it could get into the groundwater and make it unsafe to drink. If you spill some outside, do the following:

Wear gloves and a mask to keep the smell from getting into your lungs.

Cover the mess with something that can soak up the liquid, such as sand, baking soda, or kitty litter.

Cover the fabric with paper towels and let it sit for up to three hours.

Use dry paper towels to clean up the fabric and paper towels, then throw them away. Make sure the trash bag is closed and wash your hands well.

Use soap and water to clean the area, and use more water to get rid of any stains that are still there.

Let the wet area air dry as much as possible. You could also put newspaper sheets or paper towels between the layers.

Take your expired or contaminated antifreeze to a recycling center, gas station, or automotive shop

Some service shops will take in antifreeze, motor oil, transmission fluid, etc., treat it, get rid of it, or recycle it. Once you find a place to dump your trash, do these things:

Drive the antifreeze to the right place to get rid of it, or hire a professional waste hauler to take it there.

Some places have machines that remove the glycol from old coolant that hasn’t been used yet. This makes the old coolant usable again. But for the process to work, the antifreeze must be clean and free of things like oil.

In a pinch, you could use water to cool things down. But you shouldn’t do that because water doesn’t work well past its freezing and boiling points. This could also hurt the engine and cost a lot to fix. So, only use it when you have no other choice. Don’t forget to check the coolant level and cooling fan often to keep your cooling system from breaking down.

Tip: Don’t only depend on the temperature light on your dashboard, because it can break.

Check out Car Battery Replacement Cost and How Much Does Maaco Charge to Paint a Car if you liked this article.