Doing a quick search on the Internet about WD-40 and car paint brings up a lot of questions and answers, but not all of them are true.

The biggest question is whether or not using WD-40 to clean scuff marks and overspray will hurt the paint on your car.

Let’s learn more about this topic and see if we can get to the bottom of it.

WD-40 is a solvent, and depending on the type of paint on your car and how you use the WD-40, it could damage the paint. When used correctly, WD-40’s ability to dissolve can be used to safely remove small scratches and blemishes from the paint on your car.

The name “WD-40” stands for “Water Displacement 40th Formula,” which means that 39 other versions of the product were turned down.

Read on to learn how to use WD-40 on your car in a safe way. 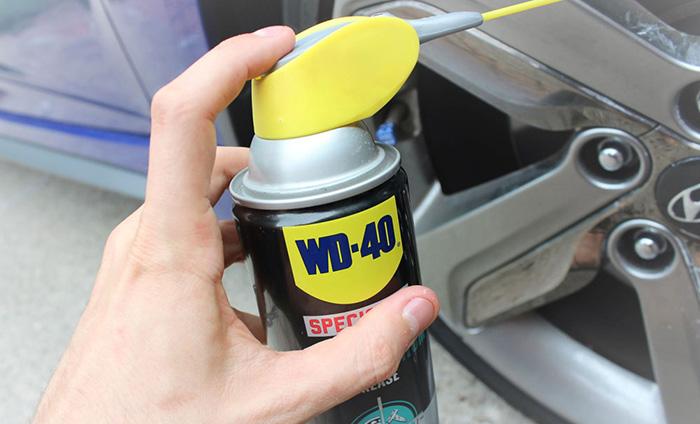 When the product was first advertised, it was said to be used to keep metal parts from rusting, especially parts for farm equipment and aeroplanes. The recipe for WD-40 is a trade secret that is kept in a safe vault.

It was first made by the Corvair car company to stop rust from getting on the outside. Later, it was found that this product could be used for many other things around the house, and now it is almost a necessity.

According to the Material Safety Data Sheets, it has aliphatic hydrocarbons (which could be hexane compounds), a petroleum base oil, and carbon dioxide as a propellant. But it could also have other chemicals that aren’t on the list.

The formulas used in Europe and Australia include iso-alkanes, naphtha, benzene compounds, xylene, and mixed isomers. It is not known if the version sold in the U.S. has the same compounds.

Because of this, people aren’t sure if it will hurt car paint or not. Keep in mind that it was made to be used on bare metal at first, and it seems to have some solvents in it.

From what we know about the ingredients, it is hard to say if it is safe for car paint.

Also, it’s possible that formulas made for different countries won’t have the same effect on everyone. Some of the ingredients would be bad for car paint if they were used on their own, but it’s not clear if WD-40 has enough of them for them to be dangerous.

Does WD-40 Have Any Safe Uses for Car Paint?

Keep in mind that different types of paint have different ingredients, so it’s possible that WD-40 will ruin some paint but not others. Because of this, it is always best to try a small spot in a place where no one will see it.

Because WD-40 contains a solvent, it is never a good idea to leave it on your car for a long time.

Small, shallow scratches on your car can be removed and temporarily covered up with WD-40, but you shouldn’t let it sit on the car for more than a few minutes.

One thing that you can do with WD-40 is fix scratches.

It is a great way to get rid of rust and corrosion before sanding and priming. Before you put on the primer, you should make sure that all of the WD40 is gone and that the area is completely dry.

WD-40 is a great way to get rid of dirt or water spots on your car, but again, you shouldn’t leave the product on the car for more than a few minutes.

It is also a great way to get rid of bug splatters that don’t want to come off.

Be careful when you use it on windshields, though, because it can leave a film that can make it hard to see at night. You can also use WD-40 to get rid of stickers, decals, and marks made by bird droppings. 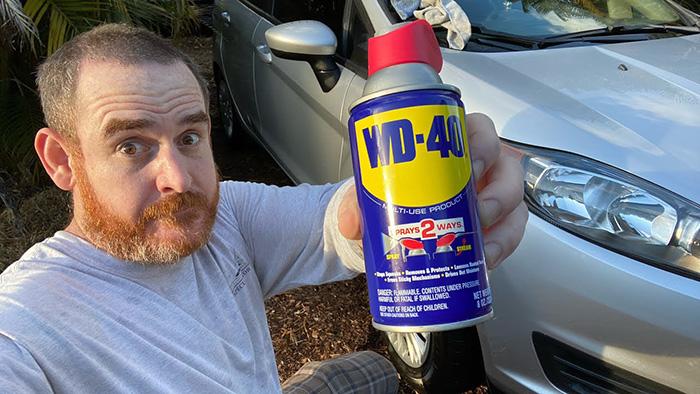 You can use WD-40 to get rid of paint overspray on your car, but you should do it as soon as possible so the paint doesn’t harden.

To get rid of overspray, put a small amount on the area where the overspray is and let it sit for a minute or two.

Next, use a dry cloth to wipe away both the overspray and the WD-40. You should wipe off as much WD-40 as you can and make sure there is no residue left on the car.

If you want to know if it’s safe to use WD-40 on your car paint, the answer is that it’s safe for some uses. The catch is that it has some things in it that could make the paint worse over time.

There don’t seem to be enough of these substances in the mix for them to have a bad effect right away.

The Biggest Difference Between Kia Sedona Vs Carnival
Mothballs in a Gas Tank: What REALLY Happens?!
Does Cruise Control Use Brakes
Car Dies While Driving But Restarts