In this article, we’ll look at the signs and symptoms of worn CV joints, how they fail, and how to tell if they are damaged. Since replacing joints is expensive, we’ve broken down your options below to help you make an informed choice.

A constant velocity (CV) joint or axle is a kind of mechanical linkage that connects the driveshafts to the wheels. The joints are called “constant velocity joints” because they can transfer motion at the same speed no matter which way they are turned. Most vehicles with front-wheel drive have CV joints, but rear-wheel-drive vehicles with independent suspension can also have them.

The CV axle assembly has two joints: one on the inside and one on the outside. The transmission is connected to the inner joint, and the wheels are connected to the outer joint. Each joint has a cage, rolling parts, an inner race, and a housing or outer race. Molybdenum disulfide grease is put inside a flexible rubber boot that covers the whole joint.

What is its purpose?

The main job of the constant velocity joint is to let the torque from the transmission get to the wheels. Since the suspension and steering keep the wheels moving all the time, you need a flexible drive shaft that can send torque at different angles. In this situation, the constant velocity axle is used a lot because it can send power to the wheels with little to no loss, no matter how they are turned or at what angle.

What are the signs of bad CV joints? 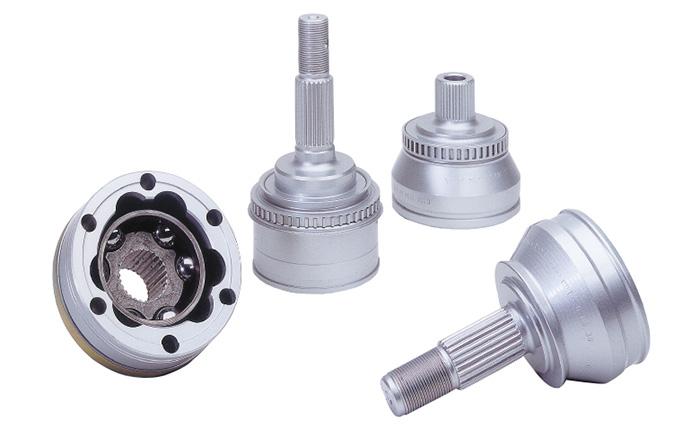 There are three main signs of bad joints: strange sounds, vibrations, and leaks. If you’ve been having these problems lately, it may be because your constant velocity joint is worn. If you find problems early and take steps to stop them, you can avoid costly repairs in the future.

Clicking and clunking noises when turning

A clicking sound is usually caused by bad wheel bearings or worn suspension parts, but it can also be a sign of failing constant velocity joints. Clicking usually happens when you turn, but it can also happen when you speed up or go straight. Most of the time, the noise comes from too much play, broken parts, or joints that aren’t well oiled.

Another sign of broken CV axles is that the vehicle shakes and shivers when it is moving. Tires that aren’t round, worn suspension parts, and bad bearings are often the cause of excessive or strange vibrations. When constant velocity joints are worn, vibration and shudder are caused by broken roller elements, broken cages, damaged races, or too much angle in the CV joints.

Leaks are also a sign of worn joints, and the only way to find them is to look for them. Grease is put into the joint to keep the bearings lubricated and cool while they work. If the flexible boot has cracks or tears, grease will leak out and get on the surface of the boot, the tyres, and the nearby steering and suspension parts.

What causes CV joints to fail? 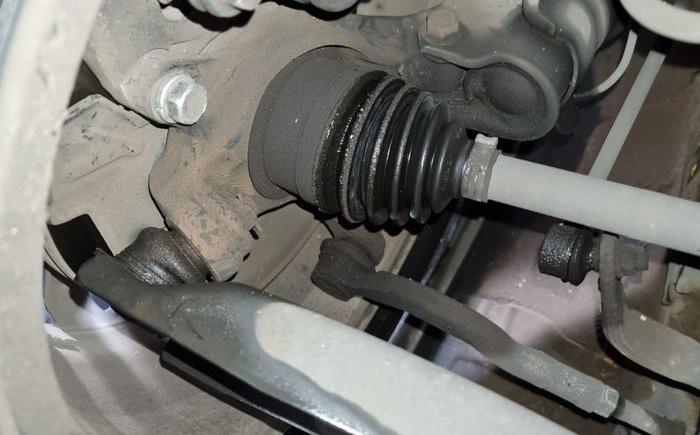 CV axles are made of strong materials and can take a lot of abuse. They are made this way so that they can handle the huge forces that are put on the wheels and the strong vibrations that they are constantly exposed to. But over time, the joints will wear down because of normal wear and tear, vibrations, impacts, fatigue, and other forces that are not part of the joint.

Most CV axles fail because the flexible boots have been punctured, pinched, or torn. Most of the time, the flexible protective boots are made of neoprene rubber, silicone, or thermoplastic so that the wearer can move freely. Because it is built and placed under the car, the boot is the part of the CV joint that is most likely to get damaged.

The design of CV axle boots is a lot like that of bellows. Boots can get cracks from normal wear and tear, which can lead to bigger tears in the long run. Also, because the trunk is under the car, sharp rocks or other road debris can damage it.

If the protective boot is torn, water, dirt, and other things could get into the assembly. If the grease gets dirty in any way, it won’t be able to lubricate and cool the bearings as well. Also, dirt and debris can damage and corrode the rolling elements and races inside the CV joint assembly.

Constant velocity joints have to deal with a lot of vibration because they are close to the wheels. The vehicle’s unsprung weight includes the weight of the constant velocity joints. They can’t use the suspension system’s ability to make the ride smoother. Even though the joints are made to handle these oscillations, too much vibration can cause the joints to wear out faster or even break.

Impact forces are much stronger than normal road vibrations and can do a lot of damage to the parts of the joints. Accidents and speeding over potholes are great examples. Constant velocity joints aren’t made to take this kind of abuse, and they break down after being hit over and over again.

How to tell if my CV joints are bad?

Even if your car has signs and symptoms of worn CV axles, that doesn’t mean the joints are worn or damaged. Strange noises can also be caused by other problems, like worn tyres, broken suspension parts, or damaged bearings. To find out what the problem is, it needs to be looked at visually.

Your car should be parked on a flat surface.

Raise the car and use jack stands to hold it in place.

Check the boot seal of each joint for cracks, tears, pinching, and other damage.

Check each joint for leaks. Loose clamps or torn boots can cause leaks.

Check to see if the axle shaft and joints are loose. There shouldn’t be any play between the parts that you can see.

If the boot is damaged or the joint has too much play, you should take your car to a mechanic to get it fixed.

How are the CV axles repaired?

Depending on the damage and the state of the joint, CV joints can be fixed. If the flexible boot is broken and leaking grease, the joint can be repacked with new grease and a new boot can be put on. This is a lot less expensive than buying a whole new assembly. If the bearing assembly or shafts are broken, the whole unit needs to be replaced.

How much does it cost to have the joints replaced?

Most of the time, the cost to replace CV joints depends on the make and model of your car. There are different kinds of constant velocity joints with different prices. If your car is old, it might be hard to find replacement joints, and they usually cost more than new joints.

Most constant velocity axles cost about $800 to replace. This includes the cost of parts, labour, and any other fees. It also matters where you take the car to get fixed. At a dealership, you can expect to pay more than $1,000, while an independent mechanic will charge you around $700. It would be smart to get estimates from different places so you can figure out which service fits your budget.

A constant velocity joint assembly will cost between $125 and $400. In some cases, you may need to replace both joints, which will cost twice as much as buying just one. If one joint is hurt, it’s likely that the other joint will be hurt soon after. But if the damage is only to the boot and the bearings are still in good shape, the best thing to do is repack the joint.

Joint replacement is a procedure that takes a lot of work and takes a lot of time. The cost to replace something is mostly made up of labour costs, which makes sense. Different places have different labour rates, but on average, an hour of work costs $100. Each joint can be fixed in two or three hours, so the labour should cost around $300.

You could also replace the broken joints on your own. Even though it’s hard, you can save a lot of money just by doing the work yourself. But before you try to do it yourself, you need to make sure you have the right parts for your vehicle and know how to do the swap. Check out this video from Scotty Kilmer that will help you.

Can I drive with bad CV joints?

No. When CV axles are worn, it is very dangerous to drive. If you want to drive the car, you should only do so to take it to a mechanic. Bad joints can break at any time, and if they do, you could lose control of your car. If any of the signs we’ve talked about so far show up, the car should be taken to the mechanic right away so the joints don’t get worse.

The constant velocity joint is one of the most important parts of a car because it lets the power from the engine go to the wheels. If the joint fails and the warning signs are ignored, the car won’t be able to move and the joints will be badly damaged. Joint failures can be avoided by making sure the joints are checked regularly, especially the boots. Fixing broken joints can be expensive and take a lot of time, but you can do it yourself if you have the right tools and know how.

Gixxer Day Suzuki Showcases New Gixxer Range
Car Shakes When Ac Is On
Fog Light Symbol Front And Back
How Much Coolant Do I Need For A Flush ?