What does 5w20 stand for, and what does it mean? As a multi-grade motor oil, the designation 5w30 implies that the oil can be used in a variety of climates. Later, I’ll explain why this is important.

Almost all motor oils have a code that is pretty similar. 0w40, 5w20, 5w30, 10w40, 10w30, and so on are all included in the code. The viscosity rating of the oils at different temperature ranges is determined by these codes.

In general, the lighter an oil is, the more easily it will flow. In cold conditions, 0w30 will flow better than 5w30, but in hot temperatures, both oils will flow equally well.

The recommended oil for most current cars is 5w20, however not all drivers are aware of this.

There is a lot to learn about 5w20 oil in this post, including which vehicles require it, as well as some of the best 5w20 alternatives available.

How To Understand The Number Codes On Motor Oils 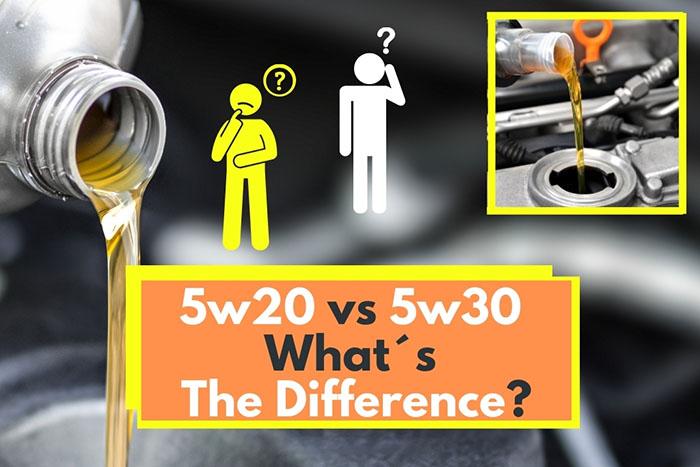 So, what factors influence the viscosity of motor oil? It’s the numbers on the oil container, plain and simple. There are two numbers here: one shows the weight of the oil in cold temperatures and the other the weight in hot temperatures.

The thinner the oil, the lower the viscosity, and hence the lighter the oil will be, as indicated by a number. Conversely, when the number rises, so does the oil’s thickness, and as a result, its mass increases.

Consequently, 5w20 is a low-temperature dynamic viscosity motor oil with a viscosity at 40°F or 0°C (represented with 5 in viscosity index). At 100oF or 100oC, the kinematic viscosity is (20) with the letter “W” in-between.

What is Oil Viscosity?

Viscosity is a measure of an oil’s flow resistance at a certain temperature. Because of their lower viscosity, thin oils flow more readily at low temperatures. In the winter, it’s best to use light oils.

Thick oils, on the other hand, would not flow as freely as thin oils at cold temperatures. When it comes to engine oil, though, there are a few things to keep in mind.

What does 5w20 stand for, and what does it mean? Multi-Grade oil is defined as one that can work at a range of temperatures rather than one that operates only at one temperature. 5w20 is an example of a multi-grade oil.

A 5w20 oil can be used in both cold and hot conditions. However, if the working temperature is too high, it may thin out.

As long as you live in a region where temperatures don’t rise above 20oC or 68oF, you should use 5w20.

Are There Any Benefits Of 5w20?

Yes, because they are synthetic, they may be used in any engine. In addition, they provide excellent protection and aid in the maintenance of lubricant in any engine’s moving parts.

It’s easier for 5w20 oils to flow through the engine because they’re lighter, which means they’ll get better mileage out of your car.

How about this? Because of their low viscosity, they do provide quite a few advantages. In addition to that, they are ideally suited for driving during the winter months.

In the event that your car is equipped with 5w30 requirements or any other oil specification, you can still use 5w20 for the engine and still enjoy a cool ride. Without further ado, here are several vehicles with engines rated at 5w20 rpm.

There are 5w20 specs for most automobiles made by the likes of Ford; Mercury; Lincoln; Chrysler; Dodge; Jeep; Toyota; Honda; Acura; Mazda; Mitsubishi; and Hyundai.

5w20 oils are required by nearly all automobile manufacturers for a certain model of their vehicles.

Among the others, there’s also Saab, Audi, VW, Kia, Isuzu and Land Rover. Because they are found in the vast majority of automobiles manufactured in the last five years, 5w20 oils are among the first to sell out in retail outlets.

It would be nearly difficult to compile a comprehensive list of all the vehicles that use 5w20. However, the majority of current engines require this oil type. An alternative is available if you need anything else.

If you’re looking for an all-synthetic lubricant, 5w20 is the best choice for your vehicle’s engine. There may be a variety of additives in the 5w20, depending on the brand that produced it.

The level of protection and effectiveness of motor oil is determined by the additives used in the manufacturing process. That being said, you should stick to the 5W20 recommended by your car’s manufacturer if you don’t want to void the warranty or damage your engine.

Most drivers choose to use 5w30 instead of 5w20 in the summer and in places with high temperatures. A 5w20-specified engine can use 5w30 as a good alternative.

In freezing temperatures, the viscosity of both oils is the same, but in hot temperatures, they differ slightly. Your engine will run smoothly all year round if you use 5w30 oil instead of the thinner 5w20.

Generally speaking, 5w20 is the most often used oil for most automobiles. It’s easy to use in both hot and cold temperatures, and it protects well.

What Is High Oil Pressure And Why Does It Matter?
What Are The Causes Of Boiling Coolant?
Subaru Electronic Parking Brake Problems Disengage Suck Reset Fix
Are Bmw Expensive To Maintain