The oxygen sensor, like any other electronic component in a system, might be damaged. If it goes wrong, the car’s behavior will be affected, such as an increase in fuel consumption, a misinterpretation of emissions, and other engine issues.

You can detect this issue by looking for some frequent symptoms below, which may suggest an issue with the oxygen sensor.

What is an oxygen sensor or lambda probe?

The oxygen sensor, also known as a lambda probe, is used to measure both the volume and the concentration of oxygen in a gas or liquid. Cars have relied on this sensor since 1980 to receive information about the amount of oxygen available for combustion.

Engine management systems employ this data to fine-tune the injection pressure based on this information. In order to achieve optimal engine performance, reduce fuel consumption, and provide information on the emissions, the sensor is critical.

The probe can identify if the emissions exceed the required standards, as well as the source of the Check Engine light and the problem with the probe, through their evaluation. The performance of the car drops, the fuel consumption rises, and the interpretation of the emissions becomes more difficult because of a malfunctioning probe.

The computer won’t be able to accurately determine the amount of air and fuel in the engine if the sensor is defective. Oxygen is necessary for the car’s operation, although the amount it contributes can vary depending on the environment, altitude, engine temperature, and barometric pressure. Despite the fact that the probe will not stop working completely, its results will steadily decline as it loses power.

Why oxygen sensor is needed?

Manufacturers of automobiles have been searching for a way to limit the amount of pollution released into the atmosphere due to environmental concerns. As one of the world’s leading causes of pollution, incomplete flue gas, experts have been developing the oxygen sensor for more than 25 years now (Lambda Probe). With today’s technology, the well can limit hazardous gas emissions into the atmosphere by up to 90%.

An oxygen sensor can monitor the amount of oxygen emitted from the combustion process of an engine, but it also helps to check that the catalyst is working properly and lowers pollution. The system is automatically deactivated while the car is traveling at a high rate of speed in order to preserve the air and fuel combination and maintain a steady speed. Fuel injection is ordered by the Lambda sensor, which tells the engine to increase the amount of gas until the mixture is appropriate for the engine’s speed.

Detecting too much or too little oxygen in the exhaust gas indicates that the engine is running on a poor mix, which means the ECU will raise or decrease the amount of gasoline consumed, respectively.

When should the oxygen sensor be changed? 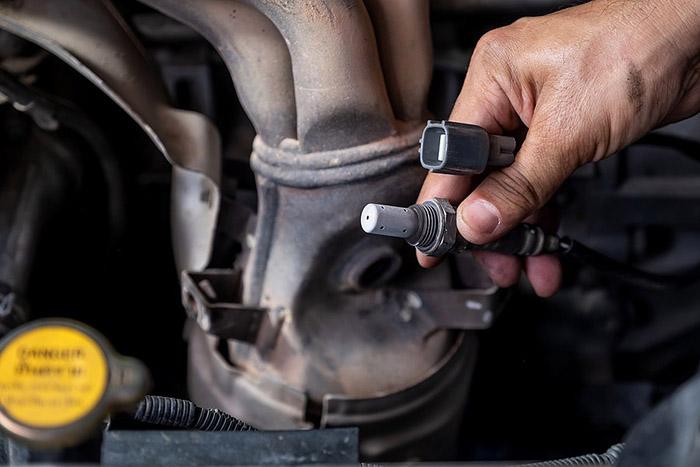 The oxygen sensor should be checked and replaced immediately if faults are discovered, according to automotive experts, after every 30,000 km (19,000 miles) or two to three years of operation. When the car suddenly starts using more fuel than it used to, it’s most likely the probe that’s giving off an error message.

A fault in the air intake or vacuum control circuits, sometimes known as “fake air,” may cause the oxygen sensor to be misled. It is able to communicate this information to the ECU.

Consequently, the engine will operate on exhaust or explode, resulting in early wear and degradation of the catalyst as more gasoline is pumped. As a result, don’t ignore the warning indications your car is giving you and make an appointment with a car service as soon as possible so that the specialists there can assess your vehicle correctly and direct you to the appropriate oxygen sensors for your specific model.

Oxygen sensors come in five varieties, all of which are essentially different. The ceramic element, heating element, and protective tube of the probes differ by type.

For the first time, in 1976, Bosch produced a form of o2 sensor that uses zirconium dioxide in a ceramic element to generate a voltage in an atmosphere with a high gas content, meaning that oxygen is in short supply.

A heating element, i.e. a resistance, is specifically positioned inside the sensor in this type of probe from Bosch, allowing it to attain its optimal operating temperature in no more than 60 seconds.

As a result of these improvements, Bosch introduced a new type of oxygen sensor in 1997 that, unlike previous models, uses sensing technology and is significantly more expensive than the others. The ceramic and zirconium dioxide components of the Planar oxygen sensor make it durable.

This is the most up-to-date design for an oxygen sensor, giving engines the precision they need to fulfill the most recent emission standards. Using zirconium dioxide and a planar ceramic element reduces emissions when the sensors are cold started and heats them up significantly faster when they’re heated. Newly developed engines with direct fuel injection use this type of oxygen sensor.

Unlike other varieties, it uses a distinct form of oxygen sensing technology that instead of providing a voltage signal that changes with the ratio of oxygen to fuel, changes the resistance of the sensor. Fewer than 0.5 percent of the cars in the world have this type of sensor equipped with titanium.

Common problems and symptoms of a bad oxygen sensor. 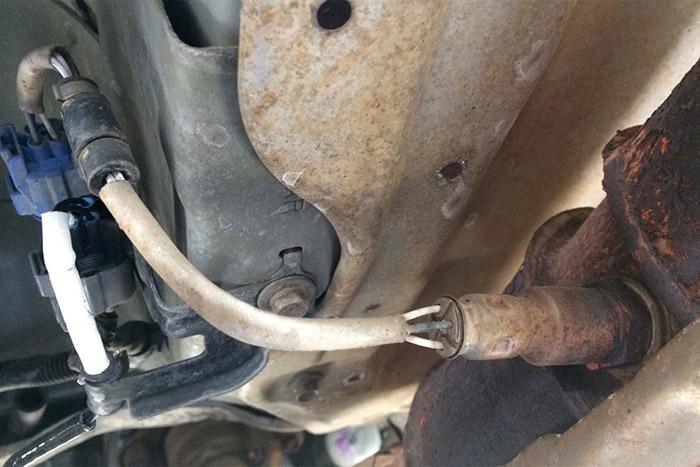 There are a number of reasons why the check engine light may remain illuminated on the dashboard. The oxygen sensor malfunctioning is one of the possible causes. The light will remain on if the sensor transmits inaccurate data or fails to communicate any data at all.

The engine will suffer if the O2 sensor fails, as this might lead to an increase in engine fuel supply and an inaccurate air fuel ratio. Consequently, fuel consumption will rise and the number of kilometers a vehicle travels will decrease.

3. The engine does not work properly

Changing the air-to-fuel ratio upsets the engine’s delicate balance, so it should be avoided. In addition to black smoke, we’ll notice a distinct idling sound from the car.

What can you do if the oxygen sensor no longer works?

Because these sensors are tiny, they should be easy to replace. Using an OBDII scanner as a starting point for troubleshooting and diagnosis is a must. The scanner is an essential tool for any driver who owns a personal vehicle, a gadget that is capable of detecting and presenting any issues.

Checking the automobile with the original OBD 2 scanner is recommended. It’s also worth noting that there are several fantastic ODB2 scanner options. In our repair shop, this ODB2 scanner does a wonderful job, but you may also try this OBD2 alternative.

When a sensor fails to function properly, the ECU receives this information, and the Check Engine LED illuminates on the vehicle. Scanners can read and analyze error codes, allowing you to determine what caused the problem in the first place. After resetting the error code, if the problem disappears, you can postpone the service call.

Voltmeter and test probe with clamp

If you don’t want to remove the sensor, you can use this kit to perform a direct test instead. To begin, keep in mind that the wires connecting the sensor are a vital part of the system. It’s time to start the engine and let it run if you’ve checked and everything is fine. Connect the voltmeter to the sensor that has to be tested. Going to a service to undergo rigorous testing is preferable if you don’t do well.

Where is the oxygen sensor located?

There are multiple O2 sensors on every car, and they can be found in various places throughout the exhaust pipe, as well as before and after the catalytic converter.

The catalytic device’s efficiency can be evaluated by mounting it at various heights (by the fact that certain parameters are analyzed before and after). Consult the car’s manual to find out exactly where the sensors are located.

How much does an oxygen sensor cost?

Each car is different, thus the price of a part might range from $20 to $100. However, the cost of changing the probe should be taken into account as well. Make sure you know what you’re signing up for before you accept the job. Choosing a service isn’t only about price; it’s also about consumer feedback and reviews.

How to replace an oxygen sensor?

Due to its small size and restricted access, replacing or repairing it is a challenge. Checking the integrity of the sensor connection cables is also a good idea, as they are prone to malfunction.

Keep an eye on the health of your car by having it serviced often, so that any issues may be spotted and fixed as soon as possible.

You should follow these instructions to replace the oxygen sensor with a new one:

How do you check an oxygen sensor?

O2 sensor problems are indicated by the Check Engine light, which comes on when the computer detects a problem. It’s possible that we’ll get an alert if the heating circuit isn’t working properly. The fact that both of these alerts display at the same time suggests that the oxygen sensor is malfunctioning.

If you have basic information about what an oxygen sensor is and how it works, you can further document how to replace this part in the event of a malfunction. But if you do not have a minimum knowledge, it is advisable to use the services of a mechanic to carry out the testing and repair in the case.

There are a few things to follow if you’re going to replace the sensor yourself.