Flywheels are found in every vehicle. A flywheel is a large metal disk that spins at a high speed. Twelve to fifteen inches is the approximate diameter. Gear teeth have been carved into its surface all the way around its circumference. What is the use of a flywheel in a vehicle? Each part of a vehicle serves a specific purpose, and all of the parts work together to make a vehicle work properly. A flywheel aids in starting your engine, smoothens the engine’s speed, balances the engine, minimizes drivetrain stress, and its weight is also beneficial.

There is a flywheel attached to the crankshaft at the rear. In between the engine and transmission, they’re located Flywheels, also known as flex plates, are an integral part of the automatic transmission and are referred to as such. That means it will be lighter than flywheels used in manual transmissions. This may be a normal part of a car, but a lot of people have no idea what it does. And, as a motorist, you must be familiar with the workings of your car’s various parts, such as the flywheel. Therefore many automobile owners are curious about what a flywheel works in their vehicle, so we’ll explain what a flywheel does here. This article can serve as a helpful reference for you. Let’s get this party started.

What Is The Purpose Of A Flywheel In A Car?

There is a purpose for every part of a car. Every vehicle benefits from their presence. A flywheel in your car serves several functions.

In order to help you start your engine, the gear teeth cut into the flywheel’s circle. A tiny gear is used in engine starter motors. It’s a Bendix gear, and it’s a very little one at that. If you turn the key, this will fit into the flywheel. The flywheel will be spun by either the Bendix gear or the starting motor combination.

The engine’s compression cycle will begin once the flywheel has been spun and the crankshaft has been turned. The Bendix gear retracts if the engine is not running, allowing the flywheel to freely spin.

In order to make the piston’s upward and downward motion into a circular one, the crankshaft needs to be spinning. However, this motion will be jerky due to the fact that only a four-cylinder engine will produce double the power. For an eight-cylinder engine, this can be increased to four times in a single engine revolution.

In this way, the flywheel’s bulk will keep the engine crankshaft turning between each firing of the pistons. Keeping the crankshaft speed consistent will allow the engine to run more smoothly.

3. It Balances The Engine

The crankshaft has two pistons that are offset from each other. The engine will tremble and chuckle if each of the pistons fires at a different angle as a result of this adjustment. The flywheel’s weight, on the other hand, prevents the engine from swaying side to side and, as a result, lessens engine vibration throughout the vehicle.

Stabilizing and smoothing down the engine’s movement will reduce the wear and strain on other parts of the drivetrain. This is true regardless of whether the engine and transmission sites are parallel. These joints will no longer be subject to wear thanks to the flywheel. 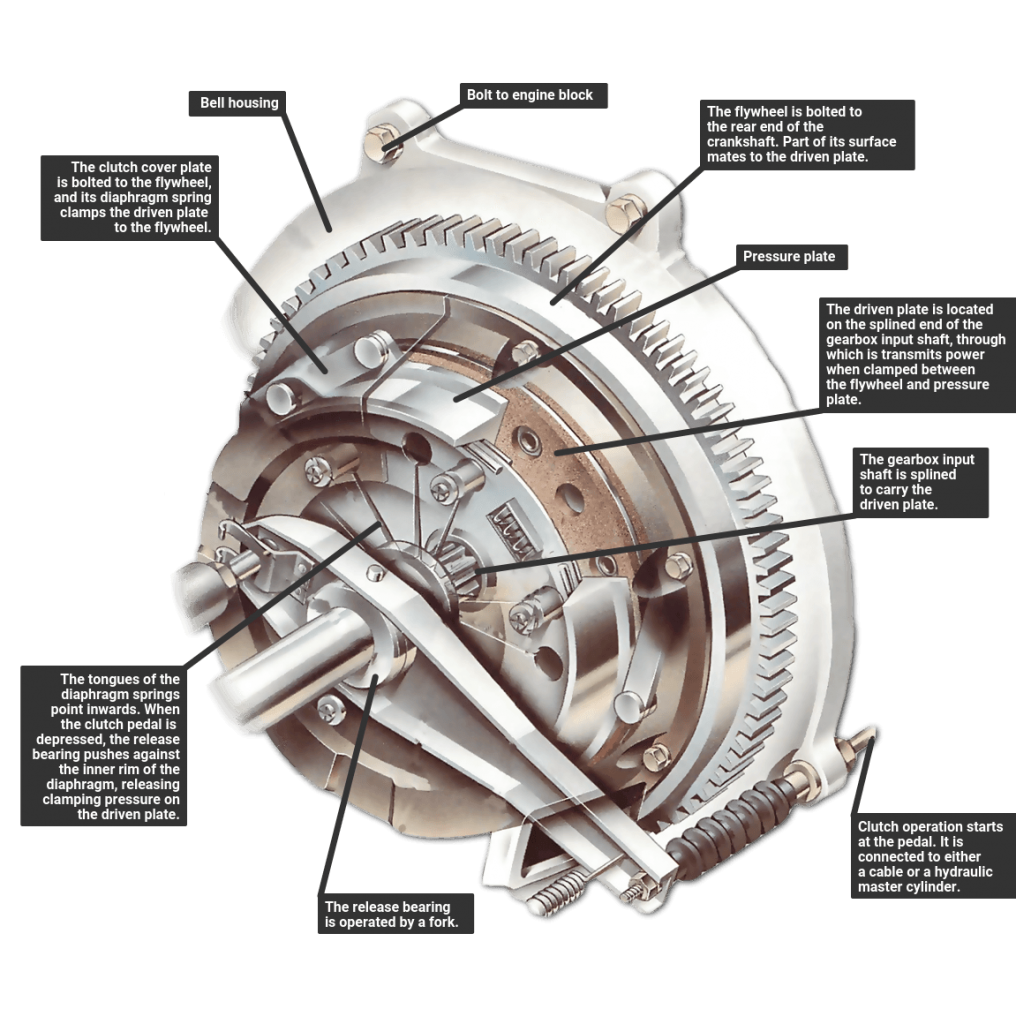 As a bespoke engine builder, you can alter the weight of the flywheel so that it performs optimally for your application. A heavy flywheel, for example, will aid the engine’s performance when it is subjected to heavy loads.

Race car engines, for example, will benefit from a flywheel that is less in weight. This is due to the fact that it might increase the rate of acceleration while making it more difficult to maintain the engine.

What Does A Flywheel Do In An Engine?

It is a hefty wheel attached to a revolving shaft that is called a flywheel. It will improve the motor’s ability to transmit power to a machine, making it more efficient. The flywheel’s inertia opposes and modifies the engine’s speed variations.

To efficiently counteract speed changes, a flywheel is equipped with a high rotating inertia. The rotational inertia of a wheel with a heavy rim and spokes or a web connecting it to the central hub is extremely high. With a reciprocating engine, the power is smoothed out by using many flywheels to distribute it more evenly.

What Does A Flywheel Do In A Small Engine?

Crankshaft and flywheel alignment and flywheel nut tightening are accomplished with the use of a rectangular metal pin called a flywheel wrench. Unfortunately, the flywheel wrench can break and safeguard the cutting knife’s pricey bits when it strikes the thing with a sufficient force.

Your engine’s flywheel was initially designed to hold the combustion engine and keep the crankshaft moving between engine strokes. To put it another way, the flywheel on a small engine serves a variety of purposes, making this the case.

What Does A Flywheel Do In A Clutch?

There are a plethora of parts that go into clutch operation, and each one is critical. The flywheel, for example, serves three primary purposes. A spinning mass, or inertia, is maintained to help the engine’s rotation in the first function.

Torque will also be more evenly distributed when running. Ring gears are needed for the starter motor to start up. The disc’s driving friction surface is created by the third function of the friction disc.

What Does A Flywheel Do In A Manual Transmission? 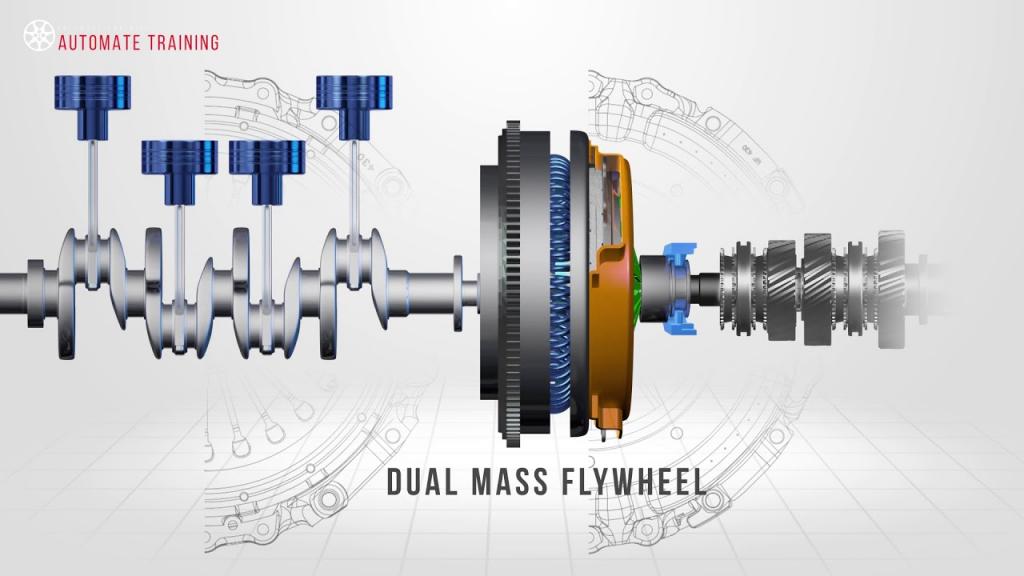 How Does A Flywheel Work?

The mechanical battery’s mass rotates around an axis, which necessitates the use of a flywheel. Using a flywheel, you can store energy in kinetic form and use it by increasing the rotor’s speed. In addition, the rotational energy in the system will be maintained by this method.

Where Is The Flywheel Located?

What Are The Advantages And Disadvantages Of A Flywheel?

Using a flywheel has its benefits and drawbacks. It’s all here.

Its Power Response Is Quite Quick.

A Shorter Recharge Time Is Expected

The Power and the Energy are nearly independent.

Its Potential Specific Energy Is Quite High.

Its Cycle and Calendar Life Is Extremely Long.

It’s Relatively Efficient in Both Directions

Discharging Is Faster Than Expected

The Complexity of Long-lasting Bearings with Low Loss.

There are limits to the amount of mechanical stress and fatigue that can be applied.

The Material’s Tip Speed Is Limited To 700m/Sec.

A High Amount Of Losses Are Caused By Parasites And Internally.

How Does The Flywheel Differ From The Governor?

To manage speed fluctuations, the flywheel and the governor are mechanical components, and this is their primary function. Governors can be used to manage speed variations caused by load changes when a flywheel is used as a flywheel.

In order for the engine to continue running, the flywheel and the governor must work together. The governor, on the other hand, only operates intermittently. In other words, it will only work if the engine isn’t running at its normal speed. 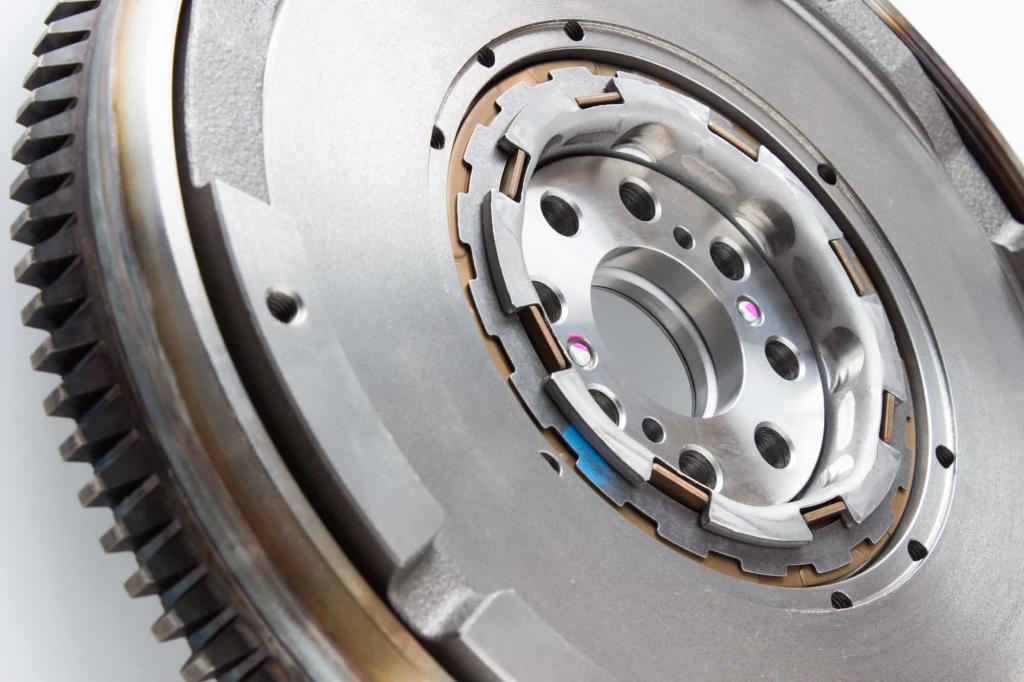 In summary, a lot of individuals have inquired about the flywheel’s function. Every engine has a flywheel, which is very large for an engine component.

Even though many motorists are unaware of it, there is one. Several conditions must be met. It also provides a slew of benefits the vehicle may take advantage of.