Today, we’ll learn more about this sensor, including how it works and where it’s located in a car. sensor.

What Is Wheel Speed Sensor? 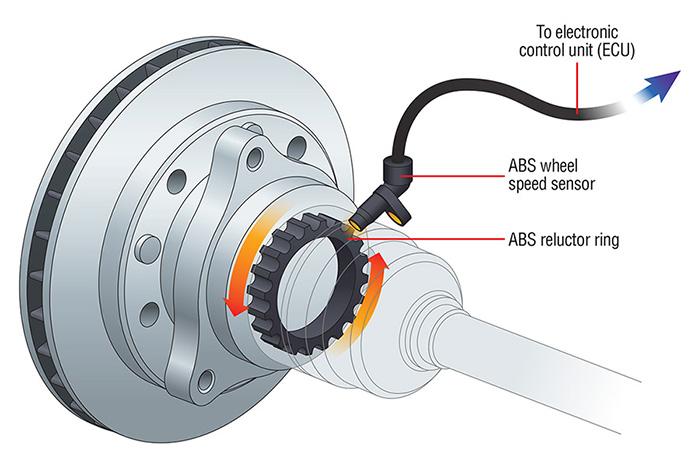 The Anti-Braking System (ABS) includes a wheel speed sensor, which is sometimes known as an ABS sensor or a vehicle speed sensor (VSS). An important part of what it does is relay data to your car’s ABS controller about the speed of your wheels.

It is then processed and used to either trigger the automated braking system or remain dormant if the car is in good control.

These days, the wheel speed sensor is a critical component of many high-tech automobiles (driver assistance systems, safety devices, etc.).

Along with anti-lock brakes (ABS), the ESP, VDC, and ATC all use this sensor to gather data. As a result, learning more about wheel speed sensors is a good idea.

If you’re looking for an old car, you may not be able to detect this sensor, although it is clearly present in almost all vehicles constructed since 1998. ABS sensors can be divided into two categories: passive sensors and active sensors.

How Does A Wheel Speed Sensor Work?

All that a wheel speed sensor has to do is provide data to the ABS controller when it measures the speed of a particular wheel. Every wheel on a cat is equipped with a sensor that is tucked away in a nook. It is possible for a car to have as few as 4 wheel sensors and as many as 8 or more.

Sensors on the wheels track their rotation to see if the vehicle needs to be controlled by the ABS owing to unusual road conditions.

When driving on slick roads, you’ll find that your brake automatically activates without your permission.

Such a reaction is triggered when the ABS receives a signal from the wheel speed sensor indicating that your vehicle’s wheels are not rotating at a consistent angle. The ABS then attempts to regain control of the vehicle by overriding the manual braking system.

Electrical signals are used to convey data from wheel speed sensors. In an automobile, both passive and active vehicle speed sensors transmit the same information to specialized systems.

Their differences are based on how they are fixed and how they relay speed data to ABS, ESP, or VDC.

Sensors for Anti-Lock Braking Systems were made possible by the employment of updated technologies. There are two types of wheel speed sensors: one that uses magnetoresistive principles, and one that uses a magnetic pulse sensor (encoder wheel).

A digital output signal is sent to the ABS using active wheel speed sensors, which operate at temperatures between -40°C and +150°C. As a result of their high precision, active wheel sensors’ signals are also used by various systems (not simply the ABS).

There are certain drawbacks to this form of vehicle speed sensor, though. No matter how far the brake disc is “tilted,” the sensor’s signal remains unaffected. The signal amplitude stability of this wheel speed sensor is one of its major advantages.

Due to the sensitive element and output module being mounted on magnetic material, these sensors are also known as magnetoresistive sensors.

Typically, the magnetic rings of active sensors are attached to a bearing seal.

Because they can resist higher levels of vibration and provide more exact readings, active sensors are more reliable than passive ones.

Passive sensors, on the other hand, are much larger. When the reluctor ring spins at zero speed, it can be detected by this device.

The power source is the ABS controller, which provides between 12V and 5V.

Modern automobiles’ ABS systems were the first to use this particular style of wheel speed sensor. Alternating voltage is used to transmit analog signals. The ABS computer analyzes and makes use of the signals after they are transmitted to the control unit.

As the wheel speed changes, passive sensors generate custom AC signal frequencies. At a speed that generates signals, the signal activates and becomes operational. In addition, this sort of sensor does not register speeds lower than 2 mph when stopped completely.

When ABS detects that one of the wheels is turning at a slower rate than the others, hydraulic braking pressure is reduced.

A toothed wheel pushed into the brake disc or wheel hub serves as a passive sensor since it picks up signals from a toothed wheel.

Passive sensors, unlike active sensors, can only read at speeds of 7 kilometers per hour or more. This sensor can be found in the vast majority of automobiles built before to 2003. Between the notch and the tooth reluctor ring, it is commonly used.

The following are some of the most important things to know about passive wheel sensors.

As a rule of thumb, they are less accurate; passive sensors may even read 3 to 5mph on a still car when you do sensor testing with an OBD-II scanner.

Because of its location, this particular style of wheel speed sensor produces analog wave voltage readings.

When the speed of the reluctor ring increases, the voltage signal increases in amplitude in passive wheel speed sensors.

The ABS computer receives signals from both active and passive VSS, which measure the frequency of wheel rotation.

In order to prevent the wheels from locking, both sensors monitor wheel rotation speeds.

Modern automobiles are equipped with safety measures such as wheel speed sensors. When the driver isn’t quick enough to react, they can help by providing critical information to certain systems in the car.

Due to its exposure to shocks and high temperatures, wheel speed sensors might wear out over time. Problems with the transmission could be caused by a faulty wheel sensor. It’s best to have a bad speed sensor replaced as soon as possible.

In other words, how exactly does a wheel speed sensor function? We appear to have simplified our analysis and response to this query. Wheel speed sensors are now standard equipment on nearly all vehicles.

Is It Illegal To Be Driving Naked?
Can You Use Dish Soap To Wash Your Car
How Many Miles Can A Dodge Ram 1500 Last
Mazda 3 TCM Reset