A car title, which should be called a Certificate of Title, is a legal document that shows who the legal owner of a certain vehicle is. A unique Vehicle Identification Number is used to identify each car (VIN.) The VIN is stamped into the metal of every car, either on the dashboard or on the inside of the driver’s door. The title will have your name and the VIN as proof that you own the car.

The Department of Motor Vehicles in each state gives a title (DMV). If you have to take out a loan to buy the car, the Certificate of Title stays in the name of the lender until the loan is paid off.

If you buy a car from a private seller, on the other hand, the title must be given to the new owner. For title transfer, the seller must sign the title to give up ownership of the car. The buyer or seller then takes the signed “released” title to the state DMV, where the state gives the buyer a new title and registration. 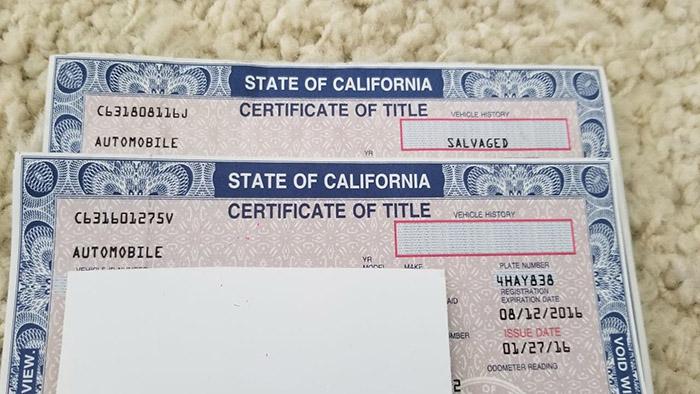 Each state keeps a copy of each title it gives out. This is a record of all the owners a car has ever had. Car titles have a lot more information than just the name of the owner. This information varies from state to state. But most of these versions of the title have the following information:

The Vehicle Identification Number is a code that tells you which car it is. The VIN of no two cars is the same. Also, the vehicle identification number (VIN) on the title should match the one on the car. If the numbers don’t match, it could mean that the car is stolen or that the VIN is fake.

The make, model, and year the car was made should also be on the title. The car’s Body Type, Style, and Color may also be listed. Most of the time, these details are not written out like “2007 Ford Explorer.” Instead, they are in the VIN code. These details can be found with a quick Google search of the VIN.

A car’s licence plate number, which is a set of letters and numbers given by the DMV when a car is registered, may also be on the title. Every car needs to have this metal plate on the back so that people can find them easily. It also shows that the car is on the DMV’s records. In many states, this metal licence plate must also be attached to the front of the car.

On the title, it may also say when a request to change ownership of a vehicle was made.

The reported mileage, which was written on the title application, is often written on the title. Under the odometer reading, the mileage section might say “EXEMPT” in some cases. Why? Well, you don’t have to have an odometer disclosure statement for cars that are 10 years old or older.

Name of lienholder or owner

The name and address of the current owner should be on the title, which is proof of ownership. If the car was financed, the title would show who held the lien. Once you’ve paid off the car and gotten a lien release, the title is considered “clean.”

What is a clean title?

A clean title means that an insurance company that paid a claim on a car has never written it off as a total loss. It has also never been said to have been in an accident, flooded, or burned. You can also say that a title is “clean” if it has no signs of problems in the past. Most used cars that are safe to drive and can be insured come with a clean title. This is also true of new cars.

But since a car’s title is only changed by car insurance claims, a clean title isn’t a guarantee that there are no problems with the car. Here are some problems that might be hiding under that car with a clean title that you are about to buy.

Insurance doesn’t cover big problems with a car’s engine or transmission, like when they break down or get damaged. Service warranties for cars are the only ones that cover these kinds of problems. Even if the car broke down a lot, the DMV wouldn’t know about it. So, you can buy a car with a clean title that has a problem with the engine.

Car owners sometimes decide to fix their cars themselves instead of going to a professional mechanic. For example, they might replace the timing belt, fix a cracked or chipped windshield, or replace the radiator. Such repairs aren’t reported because they don’t show up on the vehicle’s history report on car title status.

A car with a clean title may have had a lot of damage, but it may have been fixed without the insurance company knowing. A car accident can cost an insurance company a lot of money to fix. So, some car owners may choose to pay someone “under the table” instead of filing a claim with their insurance company, which could raise their monthly premiums. So, even though the car had something like reconstructive surgery, it is still insured and has a clean title.

Note: If you are at fault and make a claim on your insurance policy for more than a certain amount of money, your premium will usually go up by a certain percentage. This is how they get back the money they spent to fix the car but didn’t get back.

How to tell if a car has a clean title

If the car being sold has a clean title, it is much easier for everyone involved in the sale to go through with it. As was already said, a clean title means that the car has never been in a major accident, been stolen, or been written off by an insurance company. As a buyer, making sure of the following information can help you make a smart choice.

Every car that a manufacturer makes needs to have a unique Vehicle Identification Number (VIN). This is the job of the manufacturer. The 17 letters and numbers that make up the VIN should add up to a total of 17 digits. Some commercial websites, like CarFax, let people who want to buy a car check the history of a VIN.

For a small fee, these websites give detailed information about the history of a vehicle. You could, for example, find out about:

The last people who owned the car

How many times, if at all, have the car’s airbags been used?

Whether or not a Lemon Law claim has been made about the car.

Whether or not the car is still owed money.

State agencies like the Department of Motor Vehicles let lawyers, car dealers, manufacturers, insurers, banks, towing companies, and government agencies check car records for specific reasons. Most of the time, the name and address of the car owner and/or lienholder, as well as the VIN and licence plate, are in these DMV records.

A driver’s motor vehicle record can be used in the following ways:

A real government agency does its job.

Use for things like car safety and product recalls.

Notifications about cars being towed or impounded

Use in a civil, criminal, administrative, or arbitrational case.

We’ve decided that a car must have a “branded” title if it doesn’t have a “clean” title. A title brand is an official name given by the state. It should be listed on the Certificate of Title. Titles can’t be marked by private companies, car lots, or individuals.

Title brands and how they are given out vary from state to state, but here are some of the most common:

When a car has been severely damaged and the insurance company or owner writes it off as a total loss, it usually gets a Salvage title. Most of the time, a total loss means that the cost to fix the car would be equal to or more than what the car is worth. It does not mean, though, that the car can’t be fixed.

If you like fixing up old cars, you might want to buy one with a salvage title. But you should know that after being rebuilt, these cars can only be registered, insured, and driven. Once the car has been fixed up, it must pass a state inspection before it can be driven again. Also, in some places, people may not be able to buy cars that have been wrecked. When this happens, the only people who can buy these cars are repair shops or car dealers.

When a wrecked car is fixed properly and passes a state inspection, it is registered and the owner is given a “Rebuilt” title. In another place, a Rebuilt title may have a different name. Rebuilt Salvage, Restored, Prior Salvage, and Reconstructed are some other possible names.

In some places, rebuilt cars that are brought across provincial or state lines may need to be reinspected in order to keep the Rebuilt title. Also, if a rebuilt-titled car is sold across state lines, the title brand may not move to the title in the new state. So, the new title is no longer branded, which makes it clean. This is called “title washing,” and dishonest people can take advantage of it.

Have you ever heard someone call a car a “lemon”? Lemon is the name for a car that has a lot of mechanical problems, especially if it is new. Most of the time, these problems affect its safety, value, or usefulness. State by state, lemon laws are different. But some states don’t have a title for the lemon brand.

If a certain part of a car has broken down more than once while it was still under warranty, a state may issue a Lemon title, also called a Buyback title. On the other hand, the manufacturer can first try to fix the problem. If the problem can’t be fixed after several attempts, the manufacturer will buy the car back and put “lemon” on the title.

A manufacturer can resell a car that had a problem that they had to buy back. Depending on where it is, the automaker may or may not have to say that it is a buyback. Check the car’s CarFax report to see if this problem has ever happened.

A title that says “Irreparable” could also say “Flood, Junk, or Fire Damaged.” In either case, it means that the car can’t be fixed and can only be used for parts or as scrap. Even if there is a lot of water damage, a car can be cleaned up, a new carpet can be put in, and the car can be sold again.

To avoid buying a car that has been damaged by water, it is best to get a report on the car’s history to find out where it has been. A certified mechanic could also check out the car as another safety measure.

Know what a clean title looks like in your state so you don’t buy a car with a branded title. Also, look into the car’s history and check public records because there are fake titles out there. Only buy a car if the title process seems legit, or bring along someone you trust who knows about how car titles work in your area to be safe.

If you liked this article, you might also like: How Long Does It Take to Charge a Tesla, and What Are Some Car Names That Start with S?