If you have ever looked at an SUV, you may have noticed that they all have a small spoiler on the back. You don’t see this on a typical sedan or compact car, so you might be wondering why it’s there.

It might seem silly to put a spoiler on the back of an SUV, but the truth is that it gives the car better aerodynamics than it would have otherwise. It’s an important part of the car because of this, but many people want to know why.

A rear spoiler is on SUVs because it makes the vehicle more aerodynamic. This means there is less drag, which means better gas mileage. Without this spoiler, the shape of the SUV would cause more wind resistance, which would waste gas.

Even though this seems like a simple answer, there is a lot to learn about this topic. So, we’ll talk about how a spoiler makes a difference and why they aren’t always on other cars.

What is a Spoiler on an SUV? 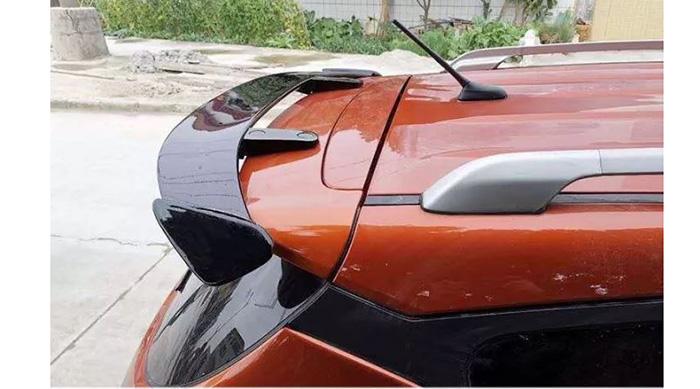 The SUV’s spoiler is usually on the end of the roof at the back of the vehicle. The spoiler looks like an aeroplane wing that has been turned upside down. It has a slight slope that makes the boxy back of the SUV more rounded.

If your SUV doesn’t have a spoiler, maybe because it was in an accident, you can have one put on aftermarket to get the benefits of having one.

Why is it Called a Spoiler?

When you hear the word “spoiler,” you might think of the word “ruined,” which might make you wonder why this article is called a spoiler. It seems like a bad thing, but a spoiler has a lot of good things about it.

So why does it have that name?

Well, a spoiler is called that because it “spoils” the negative effects of drag and resistance on the car. It also makes the car more aerodynamic and helps it get better gas mileage.

The name of this part suggests that it does a lot for the car and helps to counteract the bad effects that airflow and movement could have on an SUV. 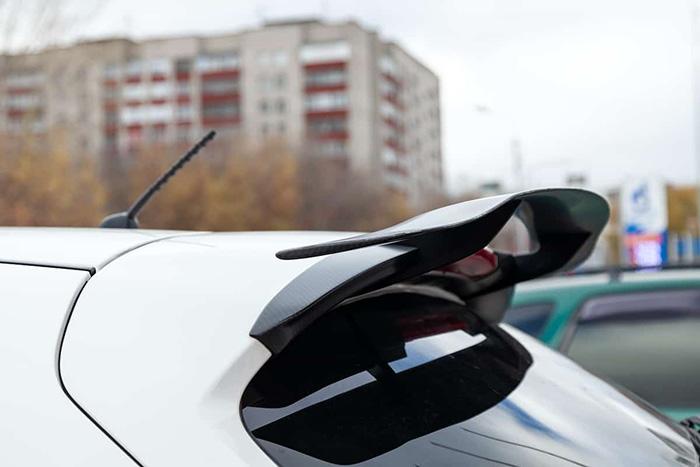 If you want to improve the gas mileage of your SUV, a spoiler is one thing you can do. Because the spoiler helps get rid of drag and wind resistance, it can help your car use less gas.

This will help you get better gas mileage on the road and save you money at the gas station. With a spoiler that makes your car move more smoothly on the road, you can use less gas to get where you need to go.

This will help you get better gas mileage, especially over time. It will also save you money on gas because you won’t have to fill up as often.

Now, answering this question is a bit trickier. This is because having a spoiler and being able to go faster seem to go together, but the spoiler is not always the cause.

A spoiler doesn’t make your car go faster on its own, but it helps the engine work better by reducing resistance and drag on the road. This lets the engine do its job and push the car to go faster.

It also helps if the car is made of a lighter material so that the engine doesn’t have to work as hard to move it.

Other Benefits of Spoilers

So far, we’ve talked about many of the good things about having a spoiler.

With the ability to make the SUV faster, use less gas, and make it more aerodynamic, it might seem like there are no other benefits.

Still, having a spoiler is a great idea for SUV owners and car drivers alike for other reasons.

On top of the benefits we’ve already talked about, having a spoiler will also help other drivers see you better when you’re on the road.

This can help you when you’re driving at night, especially if other drivers aren’t using their lights as they should. Even in dim light, your SUV’s spoiler can make it look taller, which makes it easy to spot.

This can help keep you from getting into an accident and make sure that other drivers can see you clearly even when it’s dark, foggy, or very cloudy outside.

This can also be helpful when the weather is bad and it’s hard to see the road and other cars because of the rain.

Not all of the good things about a spoiler have to do with safety or performance. Having a spoiler also makes your SUV look sportier and sleeker.

Many people like this design, even though it has nothing to do with how well the vehicle works. This is one reason why some people with smaller cars that don’t need a spoiler still put one on.

Adding a spoiler to a car makes it look like a race car. This gives the car a sporty look that many drivers like. Even though this is just a matter of appearance, it’s a big reason why many people like spoilers.

The style of an SUV’s spoiler, which is usually boxy, can also make the back look more rounded and curved.

Most spoilers are made of ABS plastic, which is often mixed with fillers to make it stiffer and heavier.

This is a common material that you will find on many cars and SUVs because it is easy to make and doesn’t cost much to make.

There are also a lot of options made from fibreglass and set with epoxy. This makes it strong and long-lasting, so it can last a lot longer.

But you don’t see as much of this material because it takes more time to make a spoiler out of it, which makes it hard to make in large quantities.

Spoilers made of carbon fibre are also thought to be a high-end option. The material carbon fibre is light and has a unique look and style.

But, like fibreglass, it is hard to make in large quantities. This is because making a spoiler from this material takes more work than making one from other materials, so it costs more.

There are also spoilers made of silicon, which is strong and can handle high temperatures in places with hot summers. This one is not as common as ABS plastic, but it is still easy to find because there are so many of them.

A spoiler on an SUV might seem like a purely cosmetic addition, but there are many ways in which a spoiler can help your car. You can improve your car’s performance in a number of ways, from helping you save a little money on gas to making it more aerodynamic.

If you own a car and were wondering why an SUV had a spoiler and your car didn’t, or if you own an SUV and wanted to know why this piece was added, you now know why a spoiler was added and what benefits it gives.

So, if you have an SUV and were wondering why it has a spoiler, you now know how useful it really is and why you should keep it.

You can use all of these benefits to make sure you get as much as you can out of your car’s spoiler. It helps you get better gas mileage, speeds up your car, and lets you see better in places that are hard to see.

How Many Motorcycle Life Expectancy?
Can You Get Pulled Over For Tinted Windows In Virginia?
How Long Do Jeep Wranglers Last
SUBARU WRX Battery Size