BMWs have a lot of electronic features, which means that their batteries and electronic systems are pretty high-tech.

Most BMWs have their batteries on the right side of the trunk, under the trunk upholstery. Putting the battery in the trunk makes more room in the engine bay and helps distribute the weight more evenly.

So, let’s take a closer look at why BMW batteries are in the trunk and how you can get to the battery to charge it or give it a jump-start.

Why Are BMW Batteries in the Trunk? 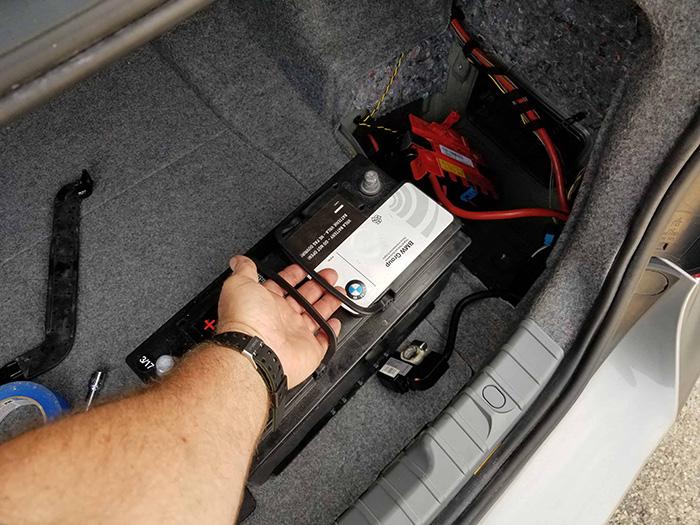 Since trunk batteries aren’t very common, you might wonder why it’s there.

Well, there are a few advantages to trunk-mounted batteries over other types. The most important reason, though, would have to be how the weight is spread.

How a car’s weight is spread out over its chassis affects how it drives.

If you put too much weight on the front, it could wear out in different places.

So, you might notice that front tyres on other cars need to be changed more often.

With a BMW, you have a car that is perfectly balanced.

None of their tyres should go out of shape more quickly than the others.

Because of this, the car usually feels better to drive than other cars.

Space is another reason why you might find batteries in the trunk of your BMW.

In most BMWs, there isn’t a lot of room in the engine bay. And their engines are pretty strong, too.

Because of this, there isn’t always enough space for a battery.

These problems are solved by putting the battery in the trunk.

So, BMW engineers can work on making your car’s engine as powerful as possible.

They can fit mechanical parts into every bit of space in the engine bay.

Lastly, putting your battery in the engine compartment would make it hot.

Since BMW uses high-performance batteries, it makes sense to put them in the trunk.

What Other Vehicles Have Trunk Batteries?

BMWs aren’t the only cars with batteries in the trunk.

They are actually pretty common in high-end cars.

The batteries for most of Subura’s high-performance cars are also in the trunk.

Even Toyota Rav4s usually put them back there. Even Jaguars put them in the trunk most of the time.

But there is one thing that all of these cars have in common.

All of them have engines that are bigger than average.

So, to save space in the engine bay, their engineers made a deal.

Batteries that are in the trunk might be harder to get to.

But it makes room in the area where the engine is.

And it moves the weight around so that it is spread out more evenly.

How Do You Charge the BMW Trunk Battery? 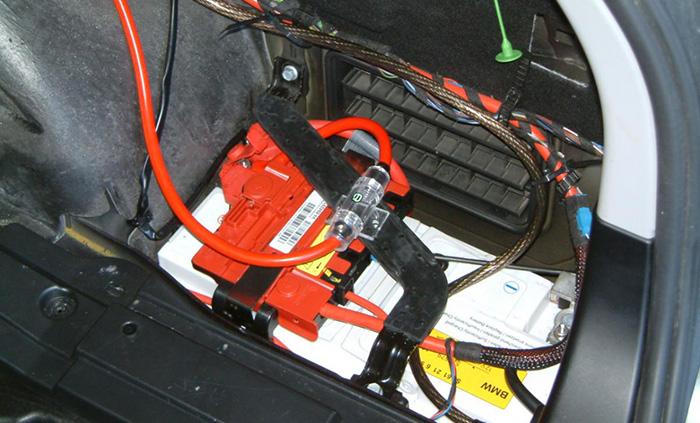 Are you having trouble getting your BMW’s battery to charge? If so, you probably haven’t been able to find it easily.

You still have to get to it first.

To find the battery in a BMW, open the trunk.

Once that is open, pull up the bottom mat that is made of upholstery.

Look under it to see if you can find the place where the batteries go.

If you’re having trouble finding it, check the owner’s manual. You can see how it will look.

Now, you should have found the place where the batteries go. Next, you need a screwdriver to take apart everything that is holding it in place.

After taking out the screws, gently lift the cover off. At this point, you should be able to see the battery clearly.

There should be two connectors on top of the terminals of the battery. One is the positive terminal and the other is the negative terminal.

Most of the time, the negative terminal will be black. First, take off the negative end by taking off its protective cover.

After you take off the negative terminal, you can move on to the positive one. Most of the time, a socket wrench is needed to do this part.

The terminal should be held in place by a few blots.

Loosen them with the socket wrench until you can pull the terminal off the battery. But, be careful. You wouldn’t want to lose any of these bolts.

The last step is to get your battery ready to charge. Lift it straight up to get it out of the trunk.

Then, take it to a place where you can charge the battery. Usually, it takes a few hours for the battery to be fully charged.

You could also use a station at home to charge batteries.

If you have one of these, you can just connect your battery to it.

Put the red clamp of the charging station on the positive terminal of the battery.

And put the black clamp on the one that isn’t positive.

Many charging stations at home don’t charge as quickly as the ones in stores. So, it might take your battery the whole night to charge.

In either case, you can put the battery back in place after it has been charged.

Put everything back together the way it was. If you did everything right, your BMW should start right away.

How Do You Jump Start a BMW With Battery in the Trunk?

It’s not as hard as it seems to jump-start a BMW battery. If you have already jump-started a car, you will know most of what you need to do.

Use the same method as above to open the compartment for the batteries. Once the battery is out in the open, don’t take its terminals off this time.

For this part, you’ll need someone to pull up behind your BMW.

Tell them to open the trunk of their car while it’s running. Then, hook up a pair of jumper cables to its battery.

Use the red wire to connect to the positive end of the battery.

And the black one should be connected to the negative.

Like before, the black cable should connect to the negative end of your battery.

And you should connect the red cable to the positive terminal.

If you’ve done this right, you’ll have a connection that goes from bad to bad. And the other will go from good to good.

Let the other car go for a little while longer. It can take anywhere from 20 to 30 minutes to charge a battery enough to be able to jump-start it.

Try to start your car after letting the battery charge for a while.

If you let it charge long enough, it will start right up. If you don’t, you might hear the engine try to start, but it might not.

If that happens, you have to let it charge for a little longer.

Most of the time, BMWs put their batteries in the trunk instead of the engine bay.

It takes a little more work to get to them, but they work about the same.

If you have charged batteries before, you will know what to do.