Why You Shouldn’t Buy A Jeep Gladiator Updated 01/2023

When the Jeep Gladiator first came out in 2018, it got a lot of attention. This new vehicle took the classic look of the popular Jeep Wrangler and added a truck bed, making it appealing to both off-roaders and truck fans.

But the Jeep Gladiator is not for everyone, no matter how cool it looks. The midsize pickup truck with a well-known name and cab may not be as good as people say it is.

Find out below why we think this way!

Why You Shouldn’t Buy a Jeep Gladiator: The Quick Answer

If you want to know why you shouldn’t buy a Jeep Gladiator, you’ve come to the right place.

Reasons to Not Buy a Jeep Gladiator

It costs a lot.

Too long for driving off-road

You’ll have to decide for yourself if these reasons are enough to stop you from buying a Jeep Gladiator.

Most of the reasons you shouldn’t buy a Jeep Gladiator are pretty easy to understand. But it’s always good to have a little bit more information when making a choice. Find out why the Jeep Gladiator isn’t our favourite mid-size truck by reading on.

Why you shouldn’t get a Jeep Gladiator

People and businesses on the web work hard to get you to buy things, but we’re here to do the exact opposite.

The Jeep Gladiator might be perfect for some people, but it has some problems that might not work for you.

If you want to buy a Jeep Gladiator, you need to be ready to spend a lot of money.

About $35,000 buys the least expensive version of this Jeep-truck combo. When you think about how much a Jeep usually costs, that’s about what you’d expect.

But this truck costs $2,000 more than the base model of the Wrangler. And we haven’t even talked about the bells and whistles you can add, which bring the price to over $60,000!

You can have just as much fun in the Wrangler’s base level as you could in the Gladiator’s base level. If that’s why you want to buy this car, there’s no reason you shouldn’t just buy a Wrangler instead.

One of the main reasons people want to buy a Jeep Gladiator is because it has a truck bed, which is very useful. Whether for work or play, truck beds offer extra storage space in addition to the vehicle’s great ability to pull a trailer.

But this truck bed is definitely nothing to scoff at. It’s only five feet long, which is shorter than the average truck bed you’d find on a Ford or Chevrolet.

The Gladiator could be a fun addition to a small camping trip or day trip, but it might not be big enough for serious equipment or business.

If you’re not buying the Gladiator for work, it’s because you want to. Most people who own Jeeps like them because they are great for off-roading adventures. These cars were made to be tough, and they have features and upgrades that can help you climb rocks.

The Gladiator, though? Most likely not.

To begin with, the truck is too long. One of the best things about the original Wrangler’s design was that it had a small, boxy shape that made it easy to drive on almost any kind of terrain.

Even with all of that, this truck can still be fun to drive on trails. It might not be as good as you thought it would be.

The standard Jeep Gladiator comes with a 3.6-liter V6 engine, which uses regular gas. Even though this midsize truck isn’t the biggest on the market, it sure eats up gas like it is. With this engine setup, the Gladiator only gets 16 miles per gallon in the city and 23 miles per gallon on the highway.

Now, these numbers are about the same as most regular pickups. But other trucks have more features and bigger beds, so many people think they are a better deal.

And in terms of mileage, the Gladiator doesn’t even come close to some of Ford’s trucks. The Ford F150 can get up to 20 MPG in the city and 27 MPG on the highway.

You can add a diesel engine to your Gladiator, which will give you better gas mileage, but it will cost you an extra $4,000. Diesel fuel also tends to be more expensive than regular fuel, so you’d have to be willing to pay that price over time.

The last reason why you shouldn’t buy a Jeep Gladiator is a matter of taste, so please bear with us. In general, we think the Gladiator looks, for lack of a better word, kind of funny.

Is it a truck or a Wrangler?

The answer is supposed to be both, which is a good thing. But really, it looks like the Jeep brand took the front half of a Wrangler and glued it to the back end of a pickup truck.

It seems that car owners have a wide range of opinions on this subject. Serious truck owners think the vehicle looks weird and isn’t a “real” truck. Jeep owners lean toward the other side of the stick because they are happy that their favourite brand now has a bed.

Since this is a matter of opinion, it’s hard to take a firm position. Though, people have strong feelings about how this Jeep looks, so if you decide to buy one, you can expect to hear both sides of the argument. 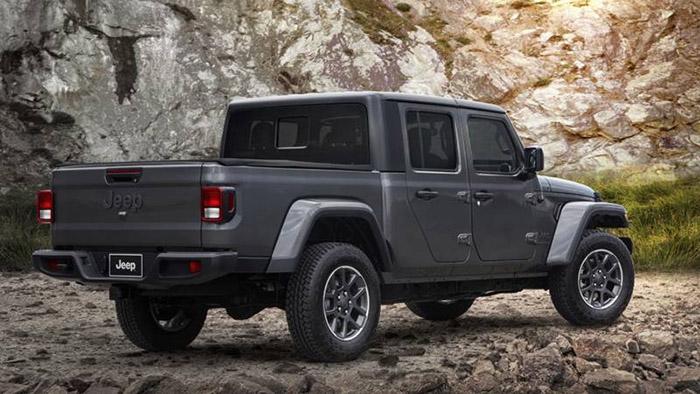 What is the Jeep Gladiator’s towing capacity?

The most weight that a Jeep Gladiator can pull is 7,650 pounds. Compared to other trucks of the same size and shape, this is a pretty big capacity.

Is the Jeep Gladiator 4-door or 2-door?

At the moment, the Jeep Gladiator only comes with four doors, but many customers would like to see a two-door version.

Is the Jeep Gladiator considered a truck?

Short answer: yes. People say that the Jeep Gladiator is a midsize pickup truck, like the Ford Ranger, Chevrolet Colorado, and Toyota Tacoma.

Most vehicles that are midsize pickup trucks fall into one of these three categories:

– Weighs under one tonne

There are always exceptions to these rules, but in general, you can expect most midsize trucks to meet the above standards.

The still-new Jeep Gladiator has some great features, like a convertible cab top, a great towing capacity, and several smart utility features.

But, as with any vehicle, it’s important to think about the cons as well. Before you make your final decision, think about these reasons why you shouldn’t buy a Jeep Gladiator.

How To Protect Your Car From The Rain
How Often Should You Wash Your Car?
The Difference Between 245 vs 265 Tires
What Does A Downstream O2 Sensor Do