Tint films for automobile windows are experiencing rapid expansion in the global industry. There has been a rise in the number of vehicles with tinted windows.

Tinting a car’s windows can be done for a variety of reasons. Some people choose tinted windows for their greater privacy while others use them to decrease the damaging effects of sunshine on the eyes.

Despite the fact that tinting your car’s windows is typically allowed, there are laws governing the darkness of these films.

An extremely dark tint can impair your eyesight, increasing the danger of an accident while driving.

In this essay, we’ll go over the different tint percentages, reflecting surfaces, and other regulations in each state.

Why Do People Tint Their Windows? 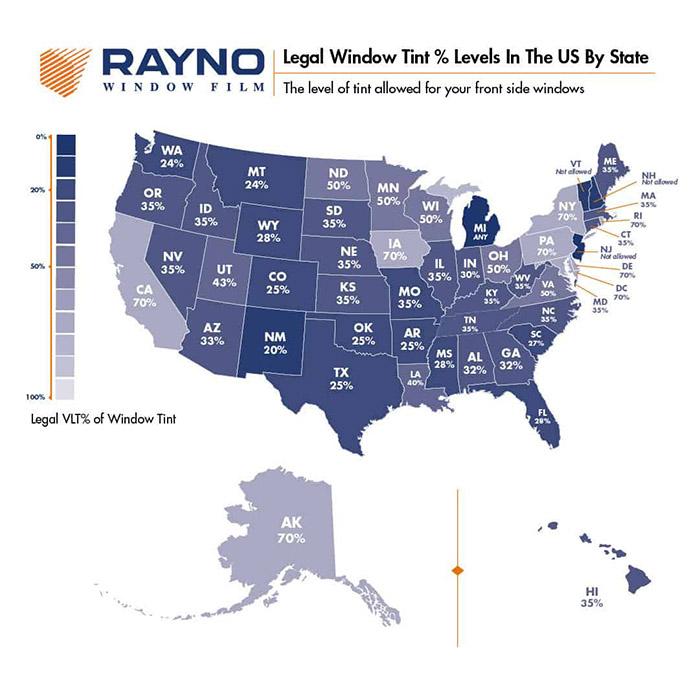 The tinting of a car’s windows can be done for a variety of purposes, including privacy and style. Some people use window tinting films for illegal purposes, but most people just prefer the increased privacy and security that they provide.

Window tinting is popular for a variety of reasons.

The glare that comes from direct sunlight can be lessened by tinting the glass. By using this technique, you can avoid being blinded when driving in the sun.

It’s common for individuals to feel more at ease in a car when there’s less brightness.

The sun’s rays won’t damage your car’s upholstery or other plastic parts. The interior of the car may last longer if this is done.

Why Are Tint Percentages Restricted By Law?

Even though tinted windows provide safety and privacy benefits to passengers and the vehicle as a whole, they are not without risk.

Especially at night, when there is no sunlight, a dark tint might impair a person’s vision. A person is more likely to be engaged in an accident if their vision is impaired by a dark tint.

This puts everyone at danger, not just the individual. Other road users, including drivers and pedestrians, are put in danger as a result.

Aside from that, dark-tinted windows obscure the view of the road for officers conducting an inspection. Many criminals operate vehicles with unlawful tinting, making it difficult for law enforcement to see what’s going on inside.

Can You Get Pulled Over For Having Tinted Windows?

When people think about installing tint film on their windows, they often wonder if they will be pulled over by the police. In most states, law enforcement officers have a clear sense of how dark car windows should be tinted.

According to local state rules, they can easily identify automobiles with tints or reflections that exceed the permitted amounts. Cops are likely to pull stop a vehicle if they notice that its window tint is excessively dark.

The visual light transmission (VLT) of your windows can be measured by the cops with a little instrument. The cop will be able to see how much light is passing through the tint film thanks to the equipment.

The officers will let you go if the tint complies with local laws. Depending on local regulations, the cop may issue you a ticket if your tint is excessive.

The officer will issue you a ticket and suggest that you have the tinting corrected. There is a good chance that you’ll have to remove the tint films from your car. After that, you can decide whether or not to get a new tint installed that complies with state regulations.

You’ll be given a specified amount of time to repair the hue. After that time has passed, you’ll want to have your vehicle inspected.

You’ll be inspected by the officers to see if you have darkened the tint. To make things even more expensive, if you haven’t had your tint changed after you got your ticket, you may have to pay an extra fee.

How Much Can Cops Fine You For Tinted Windows? 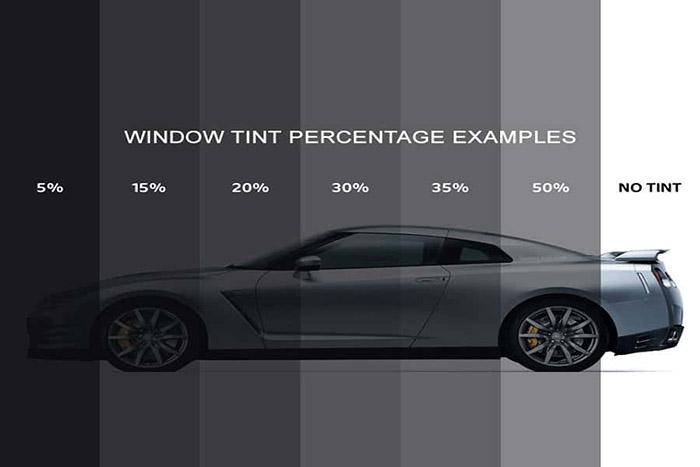 State-to-state variations in fines for exceeding the allowable tint percentage are apparent. In certain states, a small fine is linked to a violation, whereas in others, a larger payment is required.

A fee for tinted windows that fall outside of the permitted range can be found in your state’s unique rules, therefore it’s crucial to familiarize yourself with them.

A little amount, such as $20, may be appended to a ticket in some instances. Occasionally, these ticks might cost more than $200.

If you’ve previously been ticketed for having tinted windows, your next fine will be even higher. As a result, it’s critical that you complete the window tinting work within the timeframe specified by the authorities.

What Are The Car Window Tint Percentage Laws By State?

Car window tinting rules vary from state to state. If you live in a place where tinted windows are illegal, you should familiarize yourself with the state’s rules so that you don’t get pulled over for having them too dark.

In some parts of the United States, laws governing window tinting are relatively lax. Others, on the other hand, have more stringent rules that you must adhere to.

In this part, I provide an in-depth breakdown of the regulations governing window tinting. Each state’s statistics will be made available.

Your state’s laws can be found by searching for your state on this page:

Visible light transmission necessary for window tinting is represented by the percentages in this table.

There should be at least 40 percent light passing through the film if it has a 40 percent window tint percentage.

How Do Medical Exemptions Work?

Medical exemptions to window tinting rules are available in a few states. The fact that this isn’t true in every state must be remembered.

Some states do not accept medical exemptions, even if they are signed by a doctor with a local license to practice.

Learn when you may be eligible for a medical exemption in states that allow it. Only in specific circumstances would you be able to drive with a darker tint than is permitted by state law.

People who suffer from certain medical problems may be granted a medical exemption and be allowed to darken their skin tone:

the disease of lupus erythematous systemic (can cause flare-ups of arthritis symptoms, fatigue, kidney problems, and more when exposed to sunlight).

The Bloom’s disease (sunlight can cause rashes and patches on the skin).

Urticaria on the sun’s surface (often referred to as a sun allergy, causing hives and other problems when the skin is exposed to sunlight).

The condition of albinism (Patients have a more extreme sensitivity to sunlight).

Protoporphyria Erythropoietica (Burning sensation, inflammation, and pain when the person is exposed to the sun).

People who need a medical exemption in their state must fulfill a set of rules that vary from state to state. Steps should be taken if a state exception is allowed.

Sometimes, the government requires to see a letter signed by a state-licensed physician. In some states, the patient is required to display a sticker on their car indicating that they are exempt from the law.

Even if an exception is granted, the rules must be taken into account. Restrictions on window tinting will still be in place, but they will be a little more lax than the regular laws that govern tinting.

The benefits of tinted car windows outweigh the drawbacks for many people, especially those with specific medical issues. The opposite is also true: a shade that is excessively dark might pose a danger to the people within the vehicle as well as other road users.

Make sure you’re aware of local state rules before tinting your windows, since this will help you avoid a fine and keep you safe. Getting an exception is available in some instances, but not in all states.