The new Scout Bobber from Indian Motorcycles has been shown off. This motorcycle is based on the regular Indian Scout, which sells in India for Rs 12.99 lakh out of the showroom. When the bobber gets to India in a couple of weeks, it will be worth a little more. The Polaris group, which specialises in all-terrain vehicles, is in charge of the Indian Motorcycle business in India. Earlier this year, Polaris was in the news because it shut down Victory Motorcycle Brand. 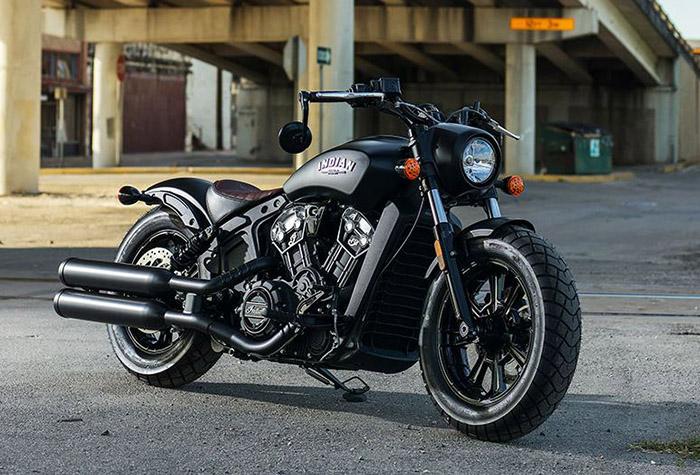 In the style of bobbers, the Indian Scout Bobber has a chopped front fender and rear mudguard, wider Knobby tyres, and a simple look. The Scout Bobber has parts that are blacked out instead of having a chrome finish like the standard Scout. Other things that make it different are the bar-end mirrors, the single saddle, and the new badges.

The 1,113cc, 69-cubic-inch V-Twin engine in the Indian Scout Bobber makes 100PS of power and 98Nm of torque. The gearbox is a cassette type unit with six speeds. The Scout Boober’s rear suspension travel is cut short to lower the bike by 45mm and give it a “stanced” look. New internal cartridges have been added to the front forks as well. The seat position is also different from the standard Scout, and the handlebars are made to make the bike easier to turn.

There is a single 294mm disc brake at both the front and the back. The front calliper has two pistons, and the back one only has one. ABS is an option for the US market, but it is likely to be standard in India.

The Indian Scout Bobber will travel the CBU route to get to India (completely built unit). We think that the price will be around Rs 13.5 lakhs (US$21,000) ex-showroom. This bike will go up against bikes like the Triumph Bonneville Bobber, the Harley-Davidson Forty-Eight, and the Harley-Davidson Street Bob.

Can Spark Plugs Cause Rough Idle
What Happens When You Use The Wrong Transmission Fluid?
Can A Bad Water Pump Cause No Heat
Does Disconnecting Battery Reset ECU