Back in the day, women didn’t ride motorcycles very often. But because times have changed, more and more Harley buyers are now women.

Even though women can drive any Harley, the bikes on this list have features that make it easier for them to do so, since women tend to be smaller than men.

We’ll talk about the best Harley for a woman who wants to buy a motorcycle in this article.

Whether you’ve been riding for years or have never been on a bike before, these six Harleys are great choices for women who want a comfortable ride. 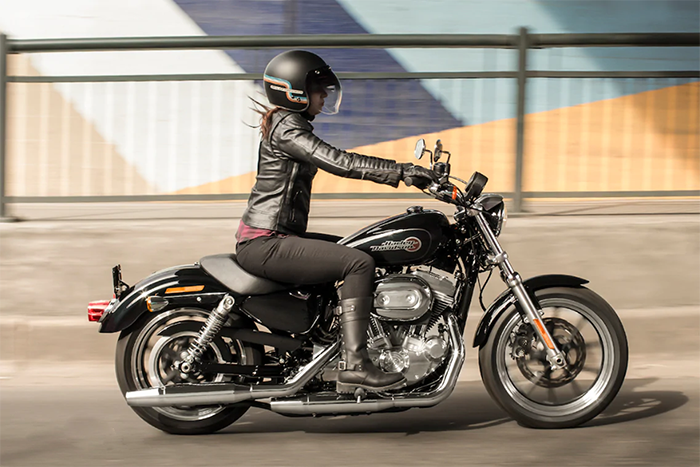 The “SuperLow” name for the tough Sportster 883 comes from the fact that its seat height is only 25.5 inches.

Bicycle straddling is usually harder for women with smaller bodies than it is for men.

The Sportster 883, on the other hand, has a deep bucket seat that gives women more support when they’re sitting on their bikes.

With a narrow seat, women’s legs don’t have to work as hard as they would with a wider seat. This makes this bike a good choice for longer rides.

The handlebars on the Sportster 883 are longer and turn toward the rider. This makes riding comfortable for women who are shorter than average.

Women who get backaches a lot will like that the Sportster’s suspension is responsive.

So, the bike is good at absorbing shocks and is also light, which makes it easy to ride.

In addition to the features we’ve talked about that make the Sportster great for women, it’s also a great choice for new riders of either gender.

It has a small 830cc motor with 52 horsepower, which makes it harder for the bike to get out of control.

The Softail Deluxe, which has a more masculine look, is a great choice for women who don’t want their ride to look too girly.

It has a seat height of only 24.5 inches, so a woman of average size can sit comfortably on it.

Using Harley-aftermarket Davidson’s lower kit, you can easily change the seat height if you’re shorter than most people.

So, you won’t have to worry about affecting the bike’s suspension in a bad way.

The Softail Deluxe is made to be comfortable to ride for women who plan to travel long distances.

There is a lot of space for your feet to rest on floorboards. The Softail Deluxe is best for experienced female riders because it has a 1746cc Big Twin engine and 109 pounds of torque.

It also weighs more than 700 pounds, which is on the heavy side. But because it has a low centre of gravity, it is easy to move around. 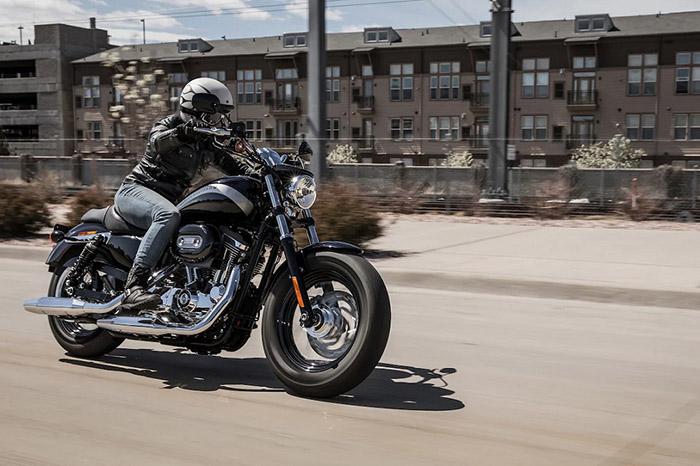 The Sportster 1200 will make women who are intermediate and advanced riders swoon.

The seat on this bike is 28.5 inches higher than the seats on the other bikes we’ve talked about so far, but the design of the deep bucket seat makes it perfect for comfort.

In fact, the design was based on the famous Cafe Racer style.

It’s a good choice for riding on both highways and city streets because it’s so light.

The rider sits up straight on the bike, and the foot controls are in the middle. Because of these things, it works well for average-sized to tall women.

People who want to remember the 1970s will love the gas tank graphic that looks like it was made in the 1970s.

One of the best Harleys for a woman who wants power but doesn’t want to ride a heavier touring model is the Sportster 1200.

It has a fixed speed screen, so you can always see how high your bike is. The bendable mini-ape handlebars are sure to be a favourite.

The Street 500 and 750 Harleys are made for younger women who want to ride fast.

Since the 500 has a 489cc engine and the 750 has a 790cc engine, these models are good for women with different levels of motorcycle experience.

Harley did a great job making sure that their Street models fit a woman’s height.

The bikes are skinny and have wide handlebars, so even the shortest women can ride them easily. Because of where the seat is, you have to lean forward more.

But footrests near your knees make sure you stay comfortable.

As you may have guessed by now, a bike’s weight is a big part of figuring out which Harley is best for a woman.

Women who ride in traffic will like that the Revolution X engine on this model is cooled by liquid. So, you won’t get too hot when your bike sits in traffic and doesn’t move.

The Street 500 and 750 are great for people who are just starting out or are on a tight budget. 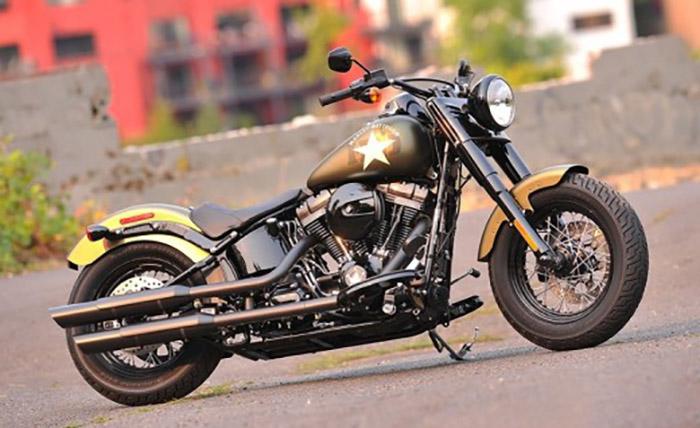 The Softail Slim is a stylish old-school Harley that is popular with both men and women. It has a low-sitting seat that is 25.5 inches high and floorboards where you can rest your feet.

The Softail Slim is easy for women with small frames to ride because it is light.

As the name suggests, the bike is slim, which is something that many women look for to make long rides more comfortable.

The Softail has a low-slung saddle on its seat. It lowers you into the bike, which is good for women with shorter legs, and it supports your back.

The Softail Slim is lighter in weight in part because its suspension has linear damping characteristics.

In fact, it works about the same as a cartridge fork made for racing. A mono-shock rear suspension makes it easier to turn corners while riding.

It has a seat height of 26.2 inches, and the handlebars are curved to help you ride in a comfortable way.

The Harley Softail Lowrider is both beautiful to look at and performs very well.

It has a great turning radius and absorbs shocks well, so you can ride comfortably no matter what the road is like.

The Softail Lowrider is not the lightest motorcycle on this list, but it is one of the lightest Softail models at 661 pounds.

It has a 1745cc engine and 110 pounds of torque, which makes it a great choice for women who want a good power-to-weight ratio.

FAQs About Harleys for Women

Now that we’ve talked about the best Harley for a woman, let’s talk about some questions that people often have about these bikes.

What’s the best Harley for a short woman?

Harley makes some of the lowest bikes on the market, which makes them a great choice for shorter women.

Most models have mods for the suspension that let you lower the seat height even more.

You can also choose to build your bike piece by piece to make it fit your needs.

The Sportster 883 is a great first bike for women because it is light, has a low seat height, and doesn’t require as much strength as other motorcycles.

What’s the best Harley for a woman new to motorcycles?

Beginner Harley drivers should look for models that are light, like the Sportster 883, which performs very well.

This will make them easier to handle on the road.

You should also look for a motorcycle with a smaller engine and less horsepower. This will give you time to build your confidence before you move on to more powerful Harleys.

Which Harleys are most comfortable for women to ride?

Most women are shorter than men, so cruiser Harleys with low seats will be more comfortable for average-sized to short women.

Women will also find it easier to ride motorcycles that are lighter. Harley knows that women want to ride, so it makes different models that fit a woman’s size.

What factors should women consider before they buy a Harley?

Before buying a motorcycle, women should think about the following things and how much experience they have riding one.

Weight. When riding, it’s easier to keep your balance and control a bike that weighs less. Plus, they use less gas, which is a plus.

Where you sit. Most women are shorter than men, so low seats are more comfortable for them than high ones.

Handlebar height. Try out different sizes of handlebars to find one that fits you well and makes you feel relaxed. Avoid bikes with handles that you have to hold by leaning forward.

Performance. Choose a bike with the right amount of power for your skill level. Beginners should get a bike with low to medium power, while more experienced riders can handle bikes with more power.

Can you customize Harley-Davidsons?

One of the best things about a Harley is that you can change it to suit your needs.

This is helpful for women because they can ask for a certain seat height, handlebar position, and weight.

Harleys are expensive to buy at first, but they hold their value better than most other bike brands.

Some of the most important things that determine whether or not a motorcycle is good for women are the seat height, the weight of the bike, and where the handlebars are placed.

Harley has a number of motorcycles that are good for women.